Los Angeles scored all their runs with one out their first time up, and two outs their last time up. But it was more than enough to beat Arizona, as our offense continued to struggle.

The Diamondbacks have been getting some rock-solid starting pitching of late. Seven of the last eight outings have seen the starter go six innings and allow two runs or less, with the only exception being Trevor Cahill's meltdown against the Padres on Monday. Tonight was not much different - though you might have been forgiven for thinking otherwise, as Chase Anderson allowed a two-run homer, prompting comments such as, "We need to get Chase out of there.  He doesn’t have it, you can tell already."  - with one out in the first inning! Trust me, if we'd completed the comeback and won this one, that would have been Comment of the Night...

Because after that blast, Anderson pitched very well - certainly, not like someone around whom rumblings of being shutdown have swirled of late. His last couple of starts have shown no signs of fatigue and, in fact, have been as good as any this season. Over those 12 innings, he has allowed nine hits and only three runs, with a K:BB ratio of 14:0. It still might be prudent to send him to the showers, since there's absolutely no point in risking anything for a lost season like this one. However, after a couple of pretty rancid outing in mid-August, he seems to have corrected the ship, and should be in the conversation for a rotation spot next year.

The offense, however, continues to sputter along, As noted in the preview [but since most of you bastards don't read it, I feel no shame about rehashing the info for the recap!], we have now set a team record by going without a home-run for the seventh consecutive game on the road. You have to go all the way back to August 20th to find the last long ball by a Diamondback away from Chase Field, and it has been 213 at-bats all told since ANY Arizona batter went deep: Nolan Reimold, off the bench in the seventh inning of the series finale against the Rockies on Sunday. On this road trip, we have scored a total of 16 runs in the six contests.

Speaking of Reimold, for a while tonight, it looked like he was going to make a stab at Mark Reynolds' mark of nine consecutive strikeouts, as he struck out looking each of his first three trips to the plate, giving him seven K's in a row - and he was particularly unhappy (with some justification, it has to be said, since rookie home-plate umpire Pat Hoberg's strikezone seemed to have the consistency of marshmallow) after the third one. However, he was saved further embarrassment with a ninth-inning double, but it still means that Reimold has eight strikeouts in 13 at-bats since coming to Arizona.

The second inning was a good demonstration of our recent offensive futility as the Diamondbacks loaded the bases with no outs, and failed to score. Apparently, an in-game graphic said that was the fifth time we had managed that this season, the most in baseball - most fans would probably think that count was an understatement. In this case, it took a Mark Trumbo double, Aaron Hill single, and Cody Ross walk to fill the bases, but that was then followed by Reimold (inevitably) striking out, Tuffy Gosewisch lining out and Anderson fanning as well. A one-out double by Gosewisch in the fifth led only to two more empty ABs with RISP for the Diamondbacks.

Arizona finally broke through in the seventh innings, with Aaron Hill singling to lead things off, and Cody Ross driving him in with a double to left-field that clanked off the bullpen door. As the picture on top shows, a couple of feet higher - or, indeed, a couple of feet nearer the foul-pole - and the homerless streak would have been over. It looked like that might be it, since normal service was resumed now there was a runner in scoring position, with a Reimold K and Gosewisch groundout. But A.J. Pollock came off the bench, and flipped a 2-2 pitch through the hole at short, to score Ross and tie the scores up at two apiece.

Cliff Pennington singled to lead off our half of the eighth, but didn't move from there. Daniel Hudson came in, replacing Oliver Perez, who had tossed a scoreless seventh. Unfortunately, his second appearance fell some way short of the perfection of his return. To be fair, the infield defense didn't help him [though Reimold did make a good catch in left for the first out]. Pennington couldn't quite make a play, but much more telling was the one out ball hit to Aaron Hill at third. Probably due to his inexperience there, he went to second trying to get the force, but wasn't in time, and there was no out.

That proved crucial, as one out later, Dee Gordon took the ninth pitch of his at-bat from Hudson and banged it back up the middle for an RBI single. Hudson was lifted for Will Harris, but he allowed both inherited runners to score, on a double. On review, it was deemed a ground-rule double due to fan interference, but the umpires judged, probably correctly, that Gordon would have scored from first anyway, so his run scored. It was largely academic, as the Diamondbacks didn't seriously threaten in the ninth, and dropped the second game, and with it the series. 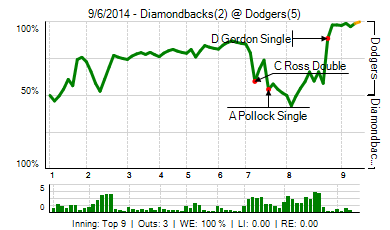 It's the series finale - and, thankfully, the last time we'll see the Dodgers this year - tomorrow afternoon, with Trevor Cahill taking on Zack Greinke. Maybe there'll be a brawl.