The Wild Card: Letters to Clefo III: Back In Training

I answer your questions about Baseball, life, whatever.

Share All sharing options for: The Wild Card: Letters to Clefo III: Back In Training

So I wrote a majority of this on Thursday afternoon and so it might get buried within the joyful noise of this morning. Let us still continue!

The Twins recently put out this marketing survey. Which one would the D'Backs be? 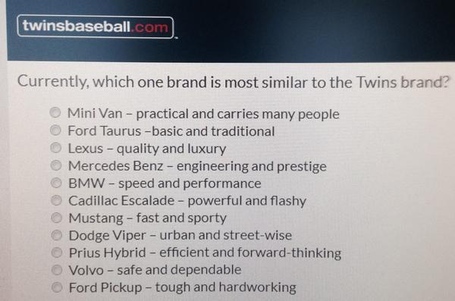 The Diamondbacks as they currently have been run are an old station wagon that your dad won't trade in because he's cheap, but he keeps replacing all of the original factory parts that were working just fine with cheap knockoffs, but he'll pay extra for them. Like all stereotypical sitcom dads, he's really stubborn about it too.

"Hell no I ain't paying $10 for your fancy coolant when I can just get a two-liter of Dr. Pepper and put it in the fridge for a few hours!"

"Car chassis made of Carbon Fiber are for suckers and communists, what you need is a bunch of rusted  45 records of the classic albums of the 1980s stuck together by electrical tape! The Dream of the Blue Turtles really is good as a passenger side door, and The Queen Is Dead is good for your trunk. "

He then doesn't get why the car won't run later.

If a fan came out of a coma from before the season started, how would you describe this season to them?

"Hey buddy, sorry about that motorcycle accident. everything went wrong and the Trumbo deal didn't work out and Paul Goldschmidt got hurt and- Hey, hey, don't hit yourself in the head with the hardened Hospital Jell-O! Nurse!!!"

I have watched every televised game the D'Backs have played this year. What have I gained from this experience?

A better understanding of life and love? Some deep reflection into the inner workings of the soul? A need to find a job that makes you work nights? I really couldn't tell you. What you derive from these experiences is up to you. I can't tell you. I mean, I could, but I'd probably be wrong. You might still listen to me and just keep telling yourself that whatever I said you gained from it is what you actually gained, but then you'd be living a lie, and I'd have total control over your soul.

Just some food for thought.

If you had to eat one single item from Taco Bell for the rest of your life, what item would that be?

Cheese Roll-Up. It's simple, cheap, and I don't have to worry about the quality of meat.

That being said, Quesaritos are better than you might imagine. We truly live in a glorious age.

Without any explanation at all, grade (F-A) where Julian Green will be in 4 years based on your gut reaction. Then, with as much explanation as you like do the same with Deandre Yedlin.

Note: This is a Soccer related question, so if you're one of those Americans who likes to roll their eyes and say "Oh, nobody cares about soccer." (Even though that is factually not true) scroll down to the next question.

I'm not sure. I have high hopes for both of them (they both looked really really really good from the World Cup), but I'm still scarred from Freddy Adu. I'll say B/B+ for both, because they both are getting chances at bigger European clubs, which will hopefully help their development. I also think Klinsmann seems to know what the hell he's doing. He's not going to try to trade Green to England for John Terry, not that I'm projecting onto anything.

How can a Swallow travel from Africa to England whilst carrying a coconut?

Is it weird that, if called to make a snap judgement on no notice, I constantly have my brain stall out as I momentarily mix up 311 and Sublime?

That is pretty weird, because while they're both reggae-influenced bands, they have distinct guitar tones and drum patterns, and all singers involved have their own distinct sound as well. I think it's you, you're just conflating all mid-90s bands together. Basically, you're the one being racist.

Boom, mic drop, oh no, I dropped the mic, the sound guy is going to be angry because the mic probably broke or at the very least screwed up its internal workings that it sounds funny. Why must we abuse sound equipment so?

SHOULD I WATCH BREAKING BAD Y/N

YES YOU SHOULD WATCH BLORKING BAG. IF YOU DO NOT WATCH BLINKING BUG YOU ARE A TERRIBLE PERSON AND SHOULD BE SENT TO PRISON FOR LIFE FOR THE CRIME OF NOT WATCHING BREAKING BENJAMIN.

(Seriously though, I could never get into it, which fine whatever people don't like shows I do, but that particular phenomenon always inspired people to make you feel like a war criminal for not watching.)

As Jim Parsons continues to win Emmy awards for being on The Big Bang Theory, should we take this as some sort of sign that a higher power- call it God, Yahweh, Weird Al Yankovic- has weighed our society in the balance and found it lacking, dooming us to some sort of awful hell dimension for our crimes?

IT'S BECAUSE YOU SINNERS DIDN'T ALL WATCH BLINKING BINGE. IT'S SO GOOD WHY AREN'T YOU WATCHING BANKING BANG?

Thanks to everyone who submitted questions! Tune in next week when I write about something that I won't get the idea for until Friday morning!