Yes, Josh Collmenter had a great outing, and yes David Peralta continues to impress, but the story of the game was seeing Daniel Hudson back out on the mound.

Share All sharing options for: Diamondbacks 6, Padres 1: Huddy's back

In a contest that realistically had no impact on the rest of the Major Leagues, Wednesday night's game meant so much. Daniel Hudson pitched in his first big league game since June 26, 2012 after going through two Tommy John surgeries.

"I didn’t even want to look at him in the eyes at the end of the inning there because I was pretty sure I was going to cry" – Miguel Montero.

In a season that’s been absolutely awful to watch, seeing Daniel Hudson out there after two grueling years was terrific. Hard not to smile and enjoy watching that, especially when he was congratulated by all of his teammates in the dugout.

Before that point, there was in fact baseball going on.

Chris Owings, back from the dead, got things started with a single to left off Cashner. David Peralta then promptly knocked a liner to center for a triple, scoring Owings from first to give the D-backs the much-needed early lead.

The Padres tried to answer in their half of the first with runners on first and third and just one out, but Josh Collmenter escaped with no damage done.

San Diego tied things up in the third. With two out already recorded in the inning, Alexi Amarista singled to left. Collmenter fell behind in the count to Seth Smith in the next at bat and he paid for it when Smith hit a double down the right field line to score Amarista from first.

After a walk to start the fifth, Alfredo Marte was advanced to third on a Didi Gregorious two batters later. Josh Collmenter then hit a weak grounder to Corey Spangenberg at second base with the infield in who threw to home to try and get Marte out. On a controversial call, Marte was safe at home, just barely able to slide past the tag.

Immediately after, Ender Inciarte hit a weak grounder of his own to first base. The Padres had Gregorious caught in a run down at third, but Solarte didn’t see the ball into his glove on the exchange from Rivera and Didi scored, 3-1. On the third straight weak infield ground ball, this time from Owings, Collmenter scored from third but it was called back because Inciarte interfered with Amarista at shortstop.

David Peralta extended the lead to three by singling home Collmenter and I’ve already written too much about the fifth.

Arizona added to the lead in the eighth when Miguel Montero knocked Mark Trumbo home for his 71st RBI of the season.

And then this happened:

Think Daniel Hudson is jazzed up to be pitching in the majors again? First three fastballs are 94, 95, 95#mustseemlbtv

Arizona added one more in the ninth, and shortly there after Addison Reed closed the game out. 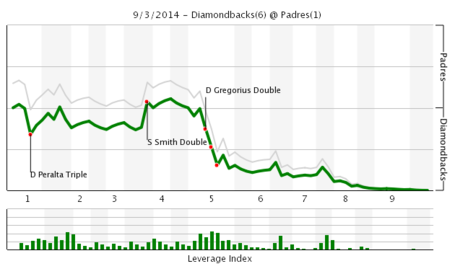 Arizona will try to even the series tomorrow in the finale. Vidal Nuno takes on Ian Kennedy.