The Week In Diamondback Tweets

And now, the end is near... And so we reach the final curtain...

Share All sharing options for: The Week In Diamondback Tweets

Every time the @Dbacks play I get more upset. I know they gon lose but I still find myself watching it. #baseballisalmostover 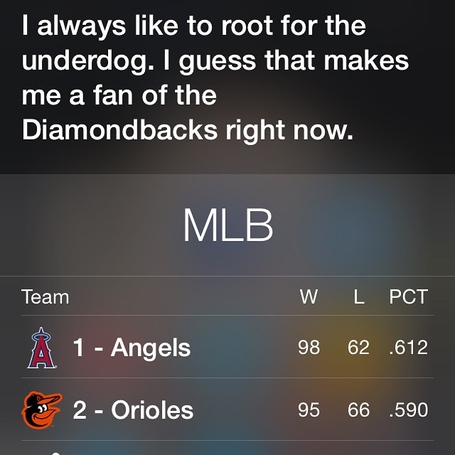 When I asked Siri who her favorite baseball team was, this is what she said. I knew she was a @dbacks… http://t.co/kOC1pNOOqY

I can only imagine how gut-wrenching having their playoff fates hinging on the #Dbacks is making the #Pirates feel right now.

And it's worth noting that the #Dbacks would have a better chance to beat the #STLCards had the #Pirates not ended Goldschmidt's season.

Wow, lots of hostility out there. All I said was #Dbacks would have been in better position to help #Pirates had they not hit Goldschmidt.

This would probably be a bad time to announce my intention of running for Mayor of Pittsburgh. So I'll wait until next week.

"Where is Goldy?" "Inciarte is first in the order?" .. it's obvious my sister hasn't been watching the games. #Dbacks

Arizona #Diamondbacks are only 22 games out of the Wild Card. We could clinch a playoff spot if this season ran into 2016.

Trying to figure out why Nuno is still pitching in this game. Like a substitute teacher, he's got no command #jmc494

For @Dbacks #FanAppreciation day, they should've let a Fan manage each of the last 3 games.

It’s not too late for the @Dbacks to fire Trammell again.

It is currently raining inside the Diamondbacks' closed-roof stadium.

Totally boggled my mind that the Dbacks batted a relief pitcher when they have 10 pitchers in the bullpen. Smh

@SteveGilbertMLB think collmenter chose wreck of Edmund Fitzgerald as a symbol for the #dbacks season?

@JackMagruder @AZSnakepit If the Cards had pulled that shit after the season we had I'm positive they wouldn't have made it out alive.

looking back on it, three home runs was like, way too many to give up

@PaminCali thanks Pam for the positive message. You're making a real difference in the world you 'independent-thinker' you.