Share All sharing options for: Diamondbacks 5, Cardinals 2: Your Arizona Spoilerbacks

It's only one game, of course, but tonight's contest was actually encouraging for the future. It would have been extremely easy for the Diamondbacks to roll over in the penultimate game of their dismal season, and hand the National League Central title to the Cardinals. But that didn't happen, with Wade Miley weaving his way through traffic to keep the game in check, Randall Delgado and Addison Reed pitching four shutout innings of one-hit baseball with six strikeouts, and Mark Trumbo having his first multi-homer game at Chase Field since becoming a Diamondback. If those are omens for 2015, they're all pretty good ones.

The first inning was a microcosm of all that, and more. Miley allowed a lead-off hit, but then promptly got a double-play ball to annul the base-runner. Then Ender Inciarte got yet another lead-off hit, his 21st of the year. That's quite impressive, as he has only batted lead-off in 75 games; the major-league #1 in lead-off hits, coming into today, was Nick Markakis on 47, so give Inciarte a full season, and he'd be there or thereabouts. That extended his hitting streak to 15 games: if you'd predicted at the start of the season, that we would have only two hitting streaks of a dozen games or better, and Inciarte would have both of them, you'd have been looked at funnily.

Of course, this being the Diamondbacks, he wasn't happy with a mere lead-off double, and made the first out trying to stretch it into a triple, rather easily too. Barely had the mutterings died down from that, when David Peralta lightened the mood, with his eighth home-run of the season, just over the fence in right-field. This act by Peralta was a fitting trbute for both Hispanic Heritage Night and "They're giving away a T-shirt with me on it" Night. Better was to follow, as Mark Trumbo send one ten rows back into the bleacher in left-center, and the home team were off to a 2-0 start. Should have been 3-0 though, muttermuttermutter.

Naturally, the Cardinals didn't roll over quietly either: they didn't get to this point in the season on top of their division, by giving up after the opposition takes a two-run lead. It was clear Miley didn't have his best stuff, and St. Louis put two men on in the second, then broke through in the third inning, tying the game up. With one out, two singles and a walk loaded the bases, and the Cardinals got on the board with a sacrifice fly. On a 2-2 pitch to the next batter, Miley dropped a curve into the dirt, which then ricocheted off Miguel Montero for a dropped strike three. It went quite some way, but Miggy didn't seem to be hustling over, and the runner on second came right around third to tie the game.

That ended the scoring for quite a while, both starters settling in. Miley's pitch count was pretty hefty, and he only lasted five innings, taking 100 pitches to reach that point. But it was still enough to reach 200 innings for the year, making him the seventh Diamondbacks pitcher in team history with multiple 200 IP seasons. He gave up six hits and three walks, with six strikeouts, and ends the season with an ERA of 4.34. It's a disappointing figure, considering he was at 3.55 last year, though some of his peripherals have improved, with a significantly higher strikeout rate.

Replacing him was Randall Delgado, who worked three innings in what looks to be his final outing of the year. That included an at-bat for Delgado, which provoked some eyebrow raising in the Gameday Thread, but I imagine the purpose of the outing was to give Delgado a bit of an extended look. It seemed to work out pretty well, as he only needed 37 pitches to get through three innings of scoreless ball, on one hit, with four strikeouts. He'll probably be in the mix for a back of the rotation spot next spring, depending on off-season acquisitions.

The Diamondbacks had some chances. They had two on in the fourth, including a Miley hit, and got a leadoff hit from A.J. Pollock their next time up, but Peralta struck out and Pollock was caught stealing. Something something Molina. But it was the seventh inning where the Diamondbacks came through. With one out, Pollock and Peralta were up again, and both men singled. That brought Trumbo up, and he deposited an 0-1 pitch into the left-field bleachers again, slightly more pulled than his first shot. Delgado retired the Cardinals in order for the eighth, and Addison Reed worked a perfect ninth for his 32nd save. Put the champagne away, St. Louis. Not tonight...

All told, a solid performance, and congrats to Alan Trammel on his first W. Peralta had three hits, Trumbo walked in addition to his pair of homers, and Pollock had two hits as well. That means our 2-3-4 hitters combined on the night to go 7-for-11 with a walk, both scoring and driving in all five Diamondbacks' runs. The victory means, if the Diamondbacks can win tomorrow, they will tie the 2010 and 1998 teams with 65 wins; a defeat would mean the 2014 team have sole possession of the second-worst season in team history (behind 2004's 51 wins, naturally). Of course, depending on what the Pirates do, a victory tomorrow may have rather bigger implications... 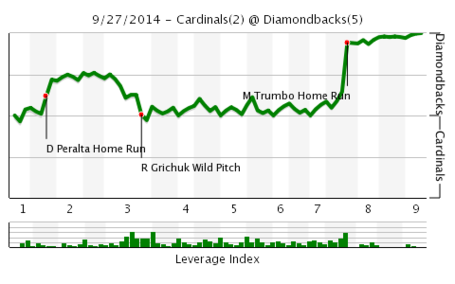 A surprisingly busy GDT: almost 300 must be the most in a little while. GuruB, SongBird and Rockkstarr12 were the top three, with others in attendance for this penultimate installment being: AzDbackfanInDc, DbacksSkins, Diamondhacks, Jim McLennan, JoeCB1991, MrMrrbi, Paulnh, Xipooo, asteroid, david.munter, freeland1787, hotclaws, onedotfive and preston.salisbury. Comment of the night - actually, make that "Comentario de la Noche," since it was Hispanic Heritage Night - to hotclaws,

So, that's it for my last recap of the season. I'll miss them, particularly the good ones, like tonight, where the game was more a pleasure than a chore to follow. But it's not as if I'll be going anywhere...  And for tomorrow, we have Cardinals' ace Adam Wainwright against our ace, Josh Collmenter - so that should be a fun way in which to end the season. Can we spoil the party one more time?