Josh Collmenter was solid, Mark Trumbo hit a home-run, and Didi Gregorius had three extra-base hits. One of these things was probably less expected than the other two.

Share All sharing options for: Diamondbacks 6, Twins 2: 99 problems, but 100 losses ain't one

In the early going, the Diamondbacks seemed to have the better chances, with a light sprinkling of runners on base in each of the first three innings, but nothing significant happening. The very start of the game was their best opportunity in the early going, as Ender Inciarte and A.J. Pollock singled to get things going, with Inciarte stealing second. However, David Peralta hit into a double play, and Mark Trumbo struck out to waste the chance. Instead, it was the Royals who got on the board. Josh Collmenter put the first two on in the third, and after retiring the next two, allowed an RBI single, with Peralta's throw home sailing to the backstop.

Collmenter struck out the next hitter to end the threat, and neither side managed a hit in the fourth inning. That all changed in the fifth, however, as the Diamondbacks took full advantage of some wildness from Rickie Nolasco. Jake Lamb and Chris Owings each singled, and Didi Gregorius then got around on a pitch, driving it just fair down the right-field line for an RBI double. Inciarte then grounded out to the right side of the infield for an RBI, and a wild pitch by Nolasco brought Gregorius in and made it 3-1 to the Diamondbacks.

With one out, Pollock then got his second hit of the game, banging the ball back up the middle, and proceeded to steal his 13th base of the season, not once, but twice. The reason he needed to do that, was because on the first attempt, the catcher's follow-through hit Peralta - he was called out for catcher's interference,. and Pollock had to go back to first. Undaunted, he stole the base again on the very next pitch. Pollock's 87% SB% has been beaten by only two D-backs with 15 or more attempts: Eric Byrnes was 24-3 (99%) in 2006, and Gerardo Parra was 15-1 in 2011 (94%, apparently before he forgot how to run the bases).

Of course, in this case, Trumbo then rendered it irrelevant, hitting what looked at first glance to be a shallow pop-up to right-center. I'm not sure it has come down yet. That's now four home-runs and 11 RBI over Trumbo's last seven games. Sure, it's a small sample size, but Imma gonna extrapolate that and confidently predict 93 home-runs and 255 RBI for Trumbo next season, based on that. You heard it here first, folks. Less sarcastically, I don't mind too much if he ends the season solidly, because we're going to be relying on him delivering the much-touted power next season, if the Diamondbacks are going to rebound.

Meanwhile, Collmenter was delivering another solid start on the mound. He got a bit of help in the fifth, after a leadoff single, when the runner was eventually called out, after a review, when he tried to steal second. But outside of the third inning mentioned above, he was rarely in trouble through the sixth. He allowed a double to leadoff the seventh, and one out later, after 109 pitches, he was done. Oliver Perez allowed the inherited runner to score, leaving Collmenter with a final line of 6.1 innings of work, with two runs allowed on five hits and a walk, with five strrkeouts. For me, he should certainly be in the 2015 rotation, almost regardless of off-season signings.

That was pretty much it in terms of excitement here, although the Diamondbacks did deliver tacos in the eighth inning. Aaron Hill got a lead-off double, stole third with one out, and came home on an infield chopper by Owings, However, his dive headfirst into homje-plate was an awkward one, and when he went into the dugout, he headed immediately down the tunnel holding his right hand. It seems he dislocated the tip of his right pinky finger: the club lists him as "day to day", but I would be very surprised if he's in the line-up tomorrow, and depending on what happens, that may be it for the season. We don't exactly need to force the issue.

Evan Marshall bailed Perez out, then worked a scoreless eighth, then Will Harris followed up by closing the door, as Arizona ended the six-game losing streak. Didi Gregorius led the offense with three hits, all of them doubles; A.J. Pollock also had three hits, while there were two apiece for Ender Inciarte, Owings and Hill, as we outhit the Twins by a 14-7 margin. The victory guarantees the Diamondbacks will no longer finish with 100 losses on the year. The Rangers also won, so in the Tankapalooza standings, we remain one-half of a game ahead of them: Texas need to lose two more games over their remaining six games, than we do in our five. 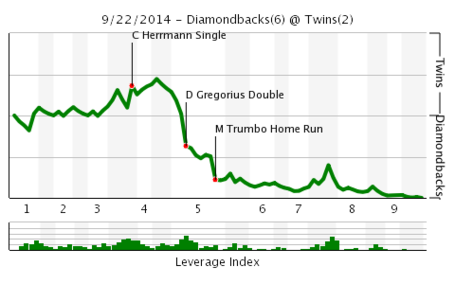 250 comments in the thread, but 60% of those were down to the top three commenters, who were SongBird, GuruB and Paulnh. Not many others beyond them, with the attendees here being: Diamondhacks, Jim McLennan, Makakilo, TheGoldenSombrero, asteroid, onedotfive and preston.salisbury.. The most-rec'd comments went to TheGoldenSombrero, but it's too long to include here. Hopefully, he'll re-create it as a Fanpost as I suggested, but until then you can see it here. So Comment of the Game goes to the other Sedona Red one, from SongBird.

We will be back at Target Field for the second game tomorrow, with the same start time, 5:10pm. Andrew Chafin gets the start for the Diamondbacks.