Trevor Cahill walked none and struck out eight over five innings today. Still pretty much sucked though, and the Diamondbacks took a big step closer to that first overall pick in 2015's draft

A fourth successive defeat for the D-backs, sends us into a tie with the Rangers for the worst record in baseball, pending their game with the Angels later tonight. And since we own the tiebreaker (which is the 2013 record), if the season were to end right now, the Arizona Diamondbacks would have the first pick in the June 2015 draft. There's still seven games left for Arizona, but the way the team has played of late makes it seem likely we won't do any better than Texas down the stretch. Right now, I wouldn't bet on us even going 3-4 the rest of the way, which is what it would take to match the 1998 and 2010 teams for our second-worst season ever.

Oddly, if you closed your eyes and squinted really hard at the box-score, you could be mistake for thinking we'd actually done quite well. We were only outhit 11-9, after all, and our pitchers had a shining 16:0 K:BB ratio. It's only the fourth occasion in franchise history, and the first time for over thirteen years, since August 23, 2001, that we've collectively struck out two batters per inning or better. Part of that was down to Oliver Perez, who managed to do something never seen before from a Diamondback pitcher - though we've been on the receiving end more than once. We'll get to that in a bit, but it's the kind of unique event which is why we keep watching!

Trevor Cahill was similarly all over the place - though, for once, not literally, as he didn't walk a batter, and struck out eight in five innings. That's the good. The bad? Being BABIP'd to death, with eight of fifteen balls in play turning into hits. And the ugly? Two more that weren't in play, since they went into the Coors Field bleachers. It was the third inning where Cahill really hit trouble, as the Rockies hit for the cycle and scored three times, with additional runs coming across home in the first and fifth innings. It was Cahill's 12th loss: the only with more for us since 2005 are Rodrigo Lopez (16 in 2010), Doug Davis (14, 2009) and Joe Saunders (13, 2011). One start left for Cahill.

The bullpen was nails tonight though, Randall Delgado, Oliver Perez and Will Harris striking out eight over three innings of one-hit, scoreless ball. The highlight was Perez delivering the first four strikeout inning in team history, when Justin Morneau struck out to lead off the seventh, but reached on a wild pitch. After a balk, Perez got the next three Colorado hitters to go down swinging too, the 73rd time a four-K inning had been accomplished. That's much rarer than a no-hitter (286) or a cycle (305). We've been on the receiving end of it twice, by the Dodgers' Brad Penny in 2006, and the Cubs' Ryan Dempster in 2009. Not bad for a guy shut down two days ago with a "dead arm."

Maybe it should have been our offense shut down with a dead arm instead, as once again, they couldn't get the hits when we needed them, going 0-for-11 with runners in scoring position, making us 4-for-26 in the series to date. So much for Coors Field being a happy home for hitters. Miguel Montero picked up three hits, and Jake Lamb did hit his fourth home-run of the year, with David Peralta geting a hit and a walk. But otherwise, it looks very much like the team has given up on the season and is now phoning in their performances - the three-game winning streak last week looks more like a fortunate aberration than anything, 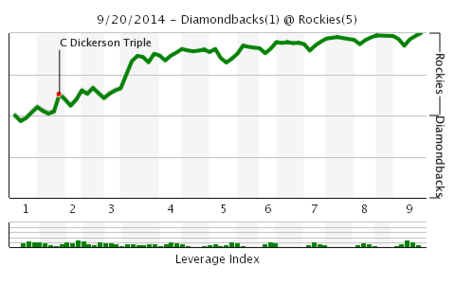 I ended up leading the comments again tonight, which shows you how low things have sunk. I fear we may not reach three digits tomorrow. GuruB was second, with JoeCB1991 and onedotfive sharing third place. Also dipping in and out: Angry_Saguaro, Clefo, James Attwood, MrMrrbi, Rockkstarr12, The Lord Humungus, imstillhungry95, shoewizard and soco. Comment of the Day to Angry_Saguaro, for this:

Trumbo reminds me of humus

"You can observe a lot just by watching."

We now sit and wait to see if Texas can beat Anaheim again, and give us sole possession of first place in Tankapalooza 2014. Tomorrow, with a first pitch of 2:10pm, it's Wade Miley, as the Diamondbacks will perhaps make a vague effort to avoid being swept by the Rockies. Or perhaps not.