Despite a truncated start from Trevor Cahill, and a poor finish by Addison Reed, the Diamondbacks offense - with a little help from the Padres - did just enough to win the rubber game and take the series at Chase Field this afternoon.

If it seems like long while since the Diamondbacks scored eight runs in consecutive games, as they did last night and again this afternoon, that's because it is. The only other time our hitters managed it this season, was more than three months ago, on June 4-5 - and that was at Coors Field, so probably counts as a bit of a pitcher's duel there. To find the last occasion prior to that, and the last time at Chase, you have to go back almost exactly a year. We played the Rockies on Saturday 14 and Sunday 15 September, 2013 and beat them 9-2 and 8-2. Today, in particular, was rather closer: we largely have Trevor Cahill and Addison Reed to thank for that.

Cahill started off well. In fact, the first inning could hardly have gone any better, as he struck out the Padres on just 12 pitches. However, this was a false dawn, and the Padres got on the board first in the second, on a double, walk and RBI single. Trevor rebounded to K the next two, but too late, and San Diego doubled their advantage in the third, on a pair of singles around a wild pitch and a walk. Worse still followed in the fourth, Cahill allowing two more runs through a double, hit batter and another wild pitch. Even though he had only thrown 64 pitches, he was lifted for a pinch-hitter in the fourth, with his final line: 4 IP, 5 H, 2 BB, 2 WP, HBP, 4 ER and 7 K. Positively Cahillesque.

Fortunately, in between, the Diamondbacks took advantage of some more crappy Padres defense, with a five-run third inning. It started innocently, with a Didi Gregorius infield single, and after a Cahill bunt, Chris Owings drove in Didi with a single. Owings stole second and A.J. Pollock walked, before Mark Trumbo singled to center. Owings scored, and Pollock took third on the throw. But, wait! The catcher threw the ball back to second, with Trumbo kinda in no man's land. The Padres covering second seemed confused, ran around for a bit, thought about throwing to third, but eventually threw back to the catcher, who was mid-way between home and the pitcher's mound. 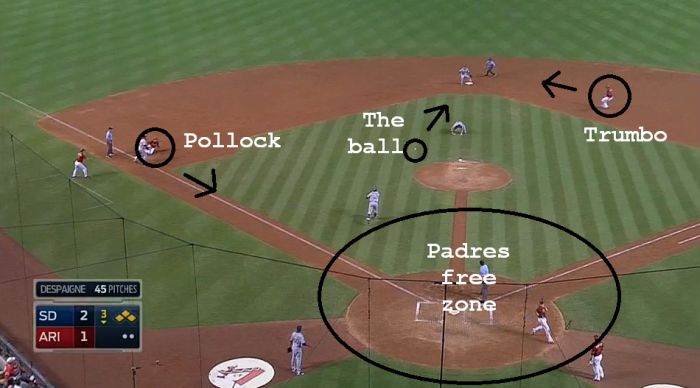 Seeing the yawning chasm around home-plate, Pollock scampered in from third to score the go-ahead run, and even Trumbo was safe. Here's the play as it unfolded: you won't see a more confusing set of bodies in motion on your NFL Sunday Ticket today. Somehow, there wasn't an error scored anywhere on that play, but San Diego made up for that, with a legitimate Padres E then immediately allowed Miguel Montero to reach second, and Trumbo to score. Finally, an Aaron Hill single drove in Montero for the inning's fifth Diamondback run. However, Cahill's subsequent struggles reeled the game back in, and after four, it was just a 5-4 lead to Arizona.

Zeke Spruill came in for long relief, and pitched very well, allowing a hit and a walk over three scoreless innings, to keep us in front. That put him in line for the first major-league win of his career, dating back to his debut in June 2013, and just as impressive, he also got his first major-league hit, a two-out double in the sixth. The top of the eighth proved a lot more fraught. Oliver Perez fanned the first batter he faced, but then allowed a single. He was replaced by Will Harris, who loaded the bases with one out on a hit batter and single, but stranded the tying run on third with back-to-back strikeouts.

Some much needed (as it turned out) insurance runs were added in the Arizona half of the inning, again with some help from the Padres. Hill walked, Ross singled and an Gregorius single brought Hill in. A Jordan Pacheco single off the bench scored Ross, and a wild pitch then brought in Gregorius, for our fifth inning in less than 24 hours with three or more runs scored. And we needed just about all of them, since Addison Reed did not fare well with a four-run lead, allowing four hits and two runs, before eventually getting the final out, after the Padres had put the tying run on base. Something something "Pitching to the score".

Still, it was nice to see the offense wake up - we scored more runs (23) over the course of this series than we did during the entire ten-game road-trip through San Diego, Los Angeles and San Francisco (21). And it's not as if we simply slugged it, as there were no home-runs today or yesterday for Arizona. This afternoon, there were two hits apiece for Gregorius and Owings, with Ender Inciarte, Trumbo and Hill all reaching base twice, with a hit and a walk each. Spruill did indeed hang on for the W, so congratulations to him for that. We also took the season series over San Diego by a solid 12-7 margin. If only we weren't 9-26 versus the Dodgers and Giants.

I think the NFL did take its toll today, with only 158 comments, which feels close to a season low. Can't say I am too surprised. GuruB, myself and onedotfive were the engine room of the SnakePit this afternoon, with others present being AzDbackfanInDc, Clefo, Diamondhacks, JoeCB1991, JoelPre, MrMrrbi, SongBird, Xipooo and imstillhungry95. onedotfive takes Comment of the Day, for this acerbic, and actually quite prescient, comment regarding this afternoon's promotion at Chase

Dog day at the ballpark

how appropriate to have Cahill pitching today

The Giants come to town for a three-game series which starts tomorrow, and we'll be hoping this one goes a bit better than the set in San Francisco. it's a 6:40pm first pitch on Monday, with Wade Miley starting for us, and Ryan Vogelsong for the Giants.