Diamondbacks Things of the Season

Been a while since we had a trawl through Ebay for things of Diamondbacks interest, so let's see what we can find... Everything from a World Series ring to a piece of Bank One Ballpark.

Share All sharing options for: Diamondbacks Things of the Season

$6,900. We talked about these last year, but there's a bit of a glut of these on the market, with three currently listed. This is the cheapest, the others are priced at $9,750 and $11,000. The name on the last is blacked out by the seller, but the others belong to "Tulumello" and "Kennedy." I'm not certain to whom either of those belonged. I think the former is more likely to be the Chase Field parking manager in those days, Angelo Tulamello. The other may be Mike Kennedy, then President of the Arizona Diamondbacks Charities board. Looking for something less pricey? You can get a 2011 Mobile Baybears Championship ring for a thousand bucks.

$2,400. Yep, you read that correctly, Twenty-four hundred dollars for a bobblehead. Double-you Tee Eff. Mind you, it's not even close to the priciest bobblehead on Ebay, which would be this one, at $36,995. However that's for a one of a kind, with a carat of real diamonds on it. Not a Kid's Club giveaway. Admittedly, it is the only such listed, with the next most expensive being a Dodgers' one for $145. Heck, you can even get a signed Shawn Green bobblehead for $90. I dunno. Maybe it's just me, but I could never imagine spending that much money on... Well, anything. But then, I never got that whole Beanie Babies hysteria either.

$1,940. Described by the seller as "The holy grail of all things Jake Lamb," this is, by a long way the most expensive Diamondback trading card currently up for auction - the next is another from the 2013 Bowman Chrome set, Archie Bradley, at $999.99. Is this a lot of money? Probably not, if Lamb goes on to a Hall of Fame career [though given he won't be into Cooperstown for 20 years or so, it's certainly a long-term investment]. If he crashes and burns? Not so much. Still, I'd rather pay two grand for Lamb, than the twenty-five thousand dollars for which the Y*s**l P**g card in the same set, apparently sold.

2 Diamondbacks Tickets for September 11, 2001. The day of the attacks

$500. Particularly appropriate for this week, which saw the 13th anniversary of the attacks. The game in question was at Bank One Ballpark against the Rockies but, of course, never took place. We all know how that season ended as well, with the Diamondbacks winning the World Series (and me proposing #obligatoryshoutout), so there's no denying the historic nature of the game and these tickets. The price still seems a bit steep, even if the seller is also throwing in the replica World Series ring given out at the beginning of the 2002 season. Throw in a real World Series ring and we're talking... 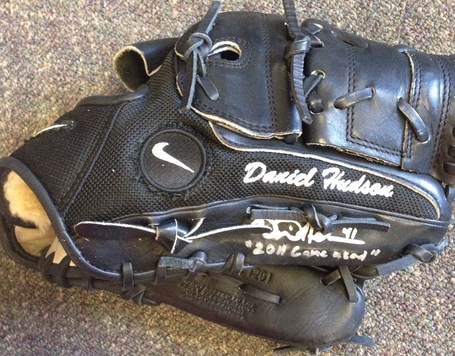 $450. Yes, David Hudson. Must, presumably, be Daniel's less well-known brother. There's not a lot of information on this one, but I'm rather suspicious of it, even beyond the seller not apparently knowing the pitcher's name. The writing on the glove indicates that it was "game used" during the 2011 season. But Hudson (Daniel, anyway) didn't pitch a single inning in the minor leagues during 2011. So, we can conclude that either this is a fake, or it's not a minor-league glove either, and the item title is wrong in just about every conceivable way. Doesn't exactly inspire much confidence to drop my Benjamins, as I believe the kids say.

$300. This must be quite old since it's sporting the original turquoise and purple color scheme. Presumably, this is a piece which had to be replaced for some reason, though the current location is Saint Charles, Missouri, so it has clearly traveled! Kinda cool, but I have no clue what I would do with this: I don't think there's a way it could be strapped onto the end of the sofa at SnakePit Towers, for instance. At a weight of 20-25 lbs, according to the seller, you'd need a pretty sturdy mount to hang it on the wall, should that be your intention. I'd probably end up "displaying" it leaning up against the wall of our downstairs boxroom.

$0.16, free shipping. And finally, right at the other end of the spectrum, we find the cheapest piece of Dbacksmabilia you'll find on Ebay at this point, a Cliff Pennington baseball card. Considering a first-class stamp now costs 49 cents [I had to look that up - thank you, priceofastamp.com! - which shows how long it has been since I sent a letter!], the economics of this one are rather uncertain. The auction is still ongoing at this point, having started at a penny, so I imagine the seller is hoping some kind of bidding war breaks out so they can recoup their cost. A Matt Davidson card is also available for the same low, low price.