There will be no beercap, Turambar having taken to the first part of the equation rather too much, presumably in anticipation of an eighth successive loss. He had the chance to beercap a winning game...

There must be something about Saturday nights at Chase Field. Three of the four times we've reached double-figure runs at home this year, it has been on that day of the week. There was the 18-run massacre of Clayton Kershaw and the Dodgers on May 16; the 14-4 clubbing of the Rockies, including a nine-run eighth innings, on August 9, and now this evening's game. The Diamondbacks honored Paul Goldschmidt's bobblehead night by having their offense all hit like him for the evening. Considering we scored fewer over the entire series in Los Angeles and San Francisco combined, this was quite a refreshing little sorbet of a game.

The odd thing is, we only actually had a couple more hits than San Diego, 11-8. But after Arizona put up a three-spot in the first, and another one in the second, this didn't feel like much of a contest, outside of a blip in the middle of Chase Anderson's night. The Win Probability graph further down this recap bears that out: after the sixth run came across home-plate, our WP was at 81.3% with one out in the second inning, and bottomed out at 79.0% thereafter. We also got some help from Padres' starter Tyson Ross, who seemed to have no control of anything. The only out recorded by our first five hitters was Chris Owings unluckily lining out right at the first baseman.

Otherwise, Ender Inciarte doubled, A.J. Pollock walked, and then both men advanced on a double steal. Mark Trumbo then sent a seeing-eye 12-hopper back off the middle, which ricocheted off the legs of the shortstop and into right field, allowing two runs to score. Aaron Hill singled, and both men advanced after a pick-off by the Padres catcher bounced off Hill's back. That proved doubly fortunate for us, as Ross then spiked a slider, and Trumbo trotted home. It was the eighth time we had scored three or more in the first inning this year: it has been our most productive frame overall.

However, this evening it was matched by the second, and we went one better, as five of the first six Diamondbacks' hitters reached base, with Chase Anderson's bunt the only out. Didi Gregorius singled, Inciarte walked, Owings had an RBI single and Pollock reached on an RBI error after the shortstop airmailed a throw to first.  Trumbo then hit a chopper on the infield, and Ross made an ill-advised throw home, Owings beating the tag surprisingly easily. Six runs in, and only four outs recorded? The D-backs must have felt sorry for Ross, as they then TOOTBLAN'd into a strike-out, throw-out double-play, though you could argue Aaron Hill checked his swing.

There were some rumblings before the game that this could be Anderson's last outing of the season, as he was 35 innings over his previous career high, even before taking the mound,. But you wouldn't have known it through the early going, as he was solid through the first three innings. He did hit a rough patch in the fourth, allowing a home-run with one out, then walking a couple of batters and giving up an RBI single, to make it 6-2 with two men aboard for San Diego. However, he escaped the jam and then posted a final zero in the fifth to qualify for the W, allowing two runs on four hits and three walks, with five strikeouts.

A very special moment then followed, as Daniel Hudson took the mound at Chase Field for the first time since his return, to a loud ovation [and, I suspect, some attendees going "Who?"]. The Padres didn't appear to have read the script, the lead-off hitter just missing a home-run, settling for a triple. Hudson then rebounded, to strike out the next couple of batters, but couldn't quite complete his Daniel Houdini impression, allowing an RBI single. Still, the radar gun had him touching 96 mph on multiple occasions, and even if he has allowed four earned runs in 2.2 innings, the arm looks healthy and the stuff apparently there. Control and finesse? They'll come back.

Oliver Perez followed, and made Huddy feel better by actually allowing a home-run to the first batter faced. But that was it, as he, Evan Marshall and Matt Stites then faced the minimum the rest of the way. Meanwhile, the D-backs tacked on, with their third three-run inning of the night in the seventh. Singles to Trumbo and Cody Ross, plus a Gregorius single, loaded the bases: another Padres' wild pitch and a two-run single by pinch-hitter Jordan Pacheco emptied them. Combine that with Tuffy Gosewisch's infield RBI single in the fifth inning, and we had our best offensive night since Peraltafest, more than a month ago.

There were some very good performances for Arizona tonight. Trumbo had his first three-hit night since March, driving in three and scoring a pair; Ross got a couple of knocks; and Inciarte reached base three times, on a hit and a pair of walks. He's definitely improving in the plate discipline department: after posting a 12:3 K:BB ratio when he first game up, since August 10, he is at 17:14. I like he and Pollock as a one-two punch at the top of the order; as we saw this evening, they can create some havoc on the basepaths. 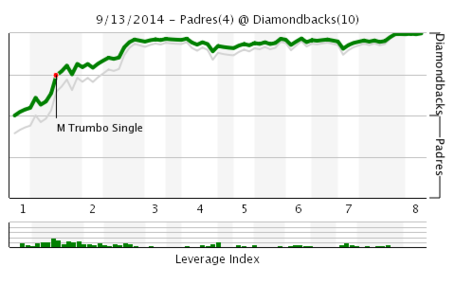 Damn, it was just good to win a game again: I'd have settle for a squeaker, just to end the losing streak. Decent turnout for a Saturday night, considering we'd lost every night for a week! GuruB, Rockkstarr12 and SongBird topped the charts, with the others presnet being: AzDbackfanInDc, AzRattler, Diamondhacks, Jim McLennan, JoeCB1991, Makakilo, Paulnh, Xipooo, asteroid, hotclaws, onedotfive, preston.salisbury, txzona and whateversclever. Several credible contenders for Comment of the Night ended tied on three recs, but the one that stands up best to being taken out of context was 'hacks:

Their Ross looks worse than our Ross

The right bra can change your world in an instant

It's back to Chase for the rubber match tomorrow afternoon, with a 1:10 pm first pitch. Trevor Cahill starts for us, and it's [copy... paste] Odrisamer Despaigne for San Diego.