If the Diamondbacks had scored five runs when Nuno was on the mound over his previous 11 starts, he would probably have won six of them, rather than none. But this outburst from our hitters was exquisitely timed to match Nuno's worst start since becoming a Diamondbacks, and so his record instead dropped to 0-6. As noted in the preview, Vidal's streak of 12 consecutive games without a win is now the fourth longest in team history; he's just one behind Max Scherzer's record to start a career in Arizona of 13 straight winless appearances.

And it became so well, too. Or, at least, the Diamondbacks scored first, though as Nuno has already been made painfully aware, scoring first is no guarantee of very much with this team. Ender Inciarte doubled to lead things off, and one out later, A.J. Pollock drove him in from third, flipping the ball into right-field, to land just in front of the Padres' outfielder. However, hopes of any further advance were immediately dashed, Mark Trumbo hitting into a double-play. And the lead was short-lived, as Nuno walked the lead-off hitter for San Diego, who came around to score after a single and ground-out. Worse was to follow, an RBI triple making it 2-1 Padres,

It could have been a worse inning, but for Cliff Pennington alertly gunning a runner down at home. However, the hits kept on coming against Nuno, with San Diego tacking on two more in the third, then another in the fourth and one more their next time up, making the score 6-1 to the Padres by the middle of the fifth. Considering the D-backs hadn't scored more than that in any of their last 29 games, going back five weeks, this one seemed all but over. It lives! Jake Lamb had a lead-off triple in the bottom of the fifth, and with one out, pinch-hitter Nolan Reimold not only failed to strike out, he drove Lamb in with a single.

That made it 6-2, and ended Nuno's nigh, as he was charged with six runs on eight hits and a walk, with two strikeouts. But, wait! There's more! With two outs, Chris Owings reached on an error, and Pollock then clubbed his 7th home-run of the season into the first row of the bleachers in left-field. That three-run shot brought Arizona back to just a single run behind, and set them up with, just maybe, the chance of their biggest comeback victory in 2014. However, if you've noticed the headline on the recap, you'll be aware that didn't quite happen.

Indeed, the Diamondbacks went down in order during the sixth, seventh and eighth innings, before finally managing to pose a threat in the ninth. Cody Ross singled with one out, and Cliff Pennington did the same with two outs, putting runners on the corners. However, pinch-hitter Aaron Hill flew out to left field, stranding the tying run on third and sealing our seventh consecutive defeat. That's the longest losing streak for Arizona in over four years, since July 22-29 in 2010, and this one is still going. So we might have a crack at matching the ten-game streak posted earlier in that miserable 2010 campaign.

Pollock had a very solid evening all round. He had three hits, drove in all but one of the Diamondbacks' runs, and also nailed a Padres hitter, who tried unwisely to stretch a single into a double. There were two hits apiece for Ender Inciarte and Jake Lamb - the latter is beginning to look better at the plate, with a hit in six consecutive starts, upping his season average from .185 to .227 over that time. We also saw the two new arrivals in action. Lefty reliever Joe Paterson make his first appearance in the majors since June 2012, getting the last out of the eighth, and Brett Jackson ran for Ross in the ninth. 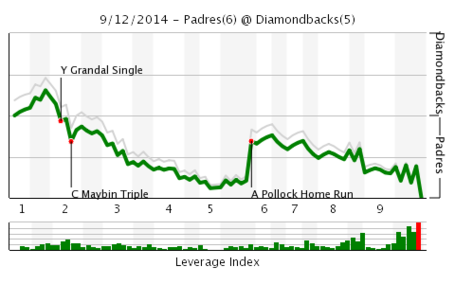 We did reach 200 comments, but oddly, it seemed quieter after we pulled to within one, than it was before. A pretty lite attendance, with GuruB leading Rockkstarr12 and myself, with the other present being: Angry_Saguaro, Clefo, Diamondhacks, MrMrrbi, SongBird, hotclaws, preston.salisbury and rd33. There were a grand total of three recs given over the course of the evening, so I don't think I'll be handing out any Comment of the Game for this evening.

The Rockies lost to the Cardinals tonight too, so we're still locked with them in Tankapaloiza 2014. It's back to Chase Field tomorrow, as we try to avoid losing eight in a row, and Chase Anderson faces Tyson Ross.