A procession of flamethrowers proved just enough to keep the Diamondbacks medium-rare this evening at Chase Field, with the offense continuing to struggle where it matters most, i.e. in the runs department.

Share All sharing options for: Diamondbacks 3, Royals 4: Arizona can't put out the fire

I hadn't realized before tonight's game that Royals' starter Yordano Ventura was the hardest-throwing starter in the major leagues this year. They were saying his average fastball was clocked at over 98 mph thus year. Fangraphs doesn't quite concur with the value, but does have his average 2-seam fastball at 96.4 mph by pitch f/X, and that makes him top among qualified pitchers. Tonight, the Chase Field gun seemed to have him living around 98 mph, peaking at 101 mph. There's no-one like that on the Diamondbacks or in our farm system. Now, there's obviously more to pitching than sheer velocity, but the kid only turned 23 in June. One to remember for future, I think.

It was certainly a contrast in styles this evening, with Josh Collmenter starting for us - his average fastball this year, according to Fangraphs, is 86.4 mph. But there wasn't all that much difference in their overall performances this evening. Both men went six innings, with Collmenter having a Game Score of 58, and Ventura coming in at 55. Arizona actually outhit Kansas City handily, by a 12-5 margin, but went 2-for-14 with runners in scoring position. The key difference was the Royals getting the key hits when they counted, with Mike Moustakas driving in all four of their runs, including a two-run homer which got the visitors on the board with two outs in the second.

Indeed, "with two outs" is another key phrase, that pesky third one proving curiously elusive for the Diamondbacks pitchers. Through eight innings, Collmenter and Evan Marshall had retired the first two batters every time, but that was when the Royals proved most dangerous, scoring all their runs. After the D-backs had tied the game up in the third on RBI singles by Aaron Hill and David Peralta - those were the two RISP hits mentioned above - Collmenter's control wobbled in the fourth. After striking out the first two batters, he then walked the next two, then allowed an RBI single before getting another K.

That was the last run allowed by either starter, with Collmenter going six innings and giving up only three hits and a pair of walks. However, the fact that all those baserunners came clumped together in the second and fourth innings, proved crucial. The Royals left four men on base all night, the Diamondbacks 11, Arizona wasting some key chances, such as having men on the corners with one out in the second and failing to score, Roger Kieschnick striking out swinging. Or the sixth inning, where Miguel Montero and Peralta led off with singles, but the next three batters couldn't advance them.

Marshall replaced Collmenter and got in two solid innings, allowed one hit and getting one strikeout. His season ERA is heading the right way again, after a wobbly spell in mid-June. His last 15 appearances, covering 13 innings, he has given up three runs and struck out 15 batters. It's interesting that his K-rate is actually fractionally higher in the majors (34 in 32.1 IP) than it was last year in the minors (59 in 58 IP). I think he'll be a useful cog in the D-backs bullpen next season, though I'm wondering how all the pieces are going to fit together, with the likely returns of Matt Reynolds and David Hernandez, plus the possible conversion of Daniel Hudson.

Another possible future closer started the ninth for the D-backs, but Matt Stites didn't fare as well. A leadoff double was followed by - gasp! - a hit batter. Cue shrieks of outrage on the Twitter about this latest display of unmitigated thuggery by Arizona pitchers. A sacrifice fly advanced the man on second, and with left-hander Moustakas up and one out, Kirk Gibson went to the bullpen, bringing in Oliver Perez. He did generate the hoped for ground-ball, but the Diamondbacks weren't quite able to turn the double-play. It looked like they had, Moustakas being called out at first despite a headlong slide, but replay showed otherwise, and the review was almost embarrassingly perfunctory.

That made the score 4-2 to the Royals, and the insurance proved critical. With one out, Cliff Pennington and Aaron Hill delivered consecutive singles to put runners on the corners. Mark Trumbo then just missed running into one, the ball dying out near the track in left-field. It brought Pennington in, but his run was meaningless. Andy Marte then went down swinging, with the tying run left stranded, like so many others this evening on first base. Montero had a good game, getting three hits; Hill had two hits and a walk, while Peralta had his usual two-hit game (he has 23 in his first 53 games, three more than the next best by a D-back). Good to see Pennington with two hits in his return. 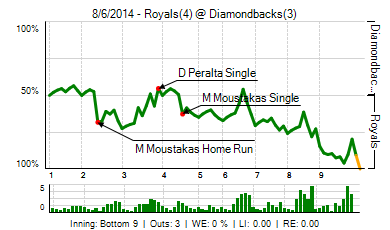 The Diamondbacks will try to avoid the sweep tomorrow night at Chase, where Vidal Nuño will take on Jeremy Guthrie, with a first pitch at the usual time. That's 6:40pm, in case you had forgotten. Since losing Goldschmidt, the team has scored only 11 runs in four games, and that's an average which won't win you many contests.