Yes, let's do that, shall we? Do not make bring out deadhorse.gif, people.

Share All sharing options for: SnakeBytes, 8/4: Moving on edition

[dbacks.com] Five Arizona Diamondbacks have plenty to prove down stretch - There are just 50 games left in the 2014 regular season for the Arizona Diamondbacks. With a playoff berth out of reach there is a tendency to dismiss those 50 games as irrelevant, but with the front office's focus having shifted to 2015, the final stretch is especially important for these five players:

[AZ Central] Reed appears to be back on track - Earlier in the season, the critique of Reed was that he was a one-pitch pitcher, relying on his fastball because he didn't trust his slider. That usage has picked up recently, coinciding with some adjustments. Reed sets up farther to the right on the rubber, giving his slider a sharper angle. Pitching coach Mike Harkey and bullpen coach Mel Stottlemyre Jr. have also worked the past few months with Reed on staying on top of the ball in his delivery to give it a crisper top-to-bottom movement. The Diamondbacks may just now be seeing the fruits of those labors.

[MiLB] Shipley balancing three pitches While it's great to have three above-average pitches -- his fastball, changeup and curve -- the 20-year-old righty knows it can also work against him at times. "I'm excited about the fact that I can throw three pitches for strikes when I want to," said Shipley, who has become Arizona's No. 2 prospect since being taken 15th overall in last year's Draft. "I'm trying not to fall in love with my changeup or my breaking pitch. I know they're good pitches for me, but I also want to keep them in my back pocket a little bit and really use my fastball. I've been trying to find that balance."

[FOX Sports] Executive Week on Diamondbacks Live begins Tuesday - Four Arizona Diamondbacks executives will join the "Diamondbacks Live" pregame show on FOX Sports Arizona as a part of Executive Week, starting Tuesday, Aug. 5. Front office personnel Derrick Hall, Tony La Russa, Mike Bell and Debbie Castaldo all join the show to discuss their part of the organization and give viewers insight into what lies ahead for the team in the future.

[ArizonaSports] Pollock sent to Triple-A Reno on rehab assignment - Triple-A Reno announced Monday they added Diamondbacks outfielder A.J. Pollock to their 25-man roster on a rehab assignment. Pollock was having a breakout season before being hit by a pitch on May 31 and suffering a fractured right hand. He was hitting .316/.366/.544 with six home runs and eight stolen bases in 54 games. He had one hit in three at-bats in the Arizona Rookie League on a previous rehab assignment.

Writing on ESPN Insider, Jim Bowden graded every team's GM for their trade deadline activity. Kevin Towers got a B-, Bowden writing, "The Diamondbacks did a solid job with their prospect returns of O'Brien, Haniger and Banda for two veteran players who weren't going to figure in their rebuilding plans. All three have good upside, albeit with some risk, too. But it was a good approach for the D-backs to take."

[Marin Independent Journal] Eric Byrnes set to play for San Rafael - On Tuesday and Wednesday night at Albert Park, the former 11-year MLB veteran will play left field for the San Rafael Pacifics minor-league baseball team against the Pittsburg Mettle. Byrnes, 38, agreed in April to a two-day contract with the Pacifics as a way to raise money for the Pat Tillman Foundation. San Rafael's newest member will donate his $1,000 salary to the foundation, and potentially hundreds more with each walk, hit, steal and catch.

The Rays were visited by a possum in the 10th inning of their game against the Athletics. Since the visiting team went on to win, I would imagine Oakland will be taking the animal back with them. I am predicting that Rally Opossum will be a big thing in the post-season this year.

[FanGraphs] Investigating The Worst Strike Zone of 2014 - It's not good. Insert discussion about robot umpires here. The following image from Gameday illustrates it nicely. Green = pitches called as balls, in case you're not familiar with the system. 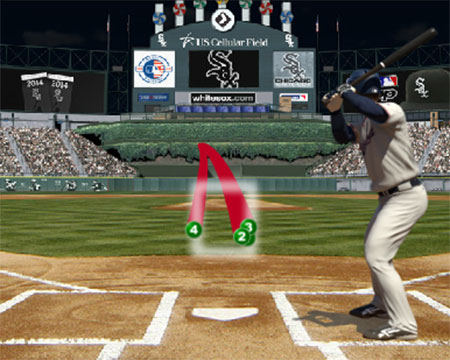 And, finally... [Not really baseball-related]

All the cool kids are doing it. After the launch of kishi and Clefo's Drunkcast over the weekend [I like how Youtube says "No description available" - I think it means "no description possible"...], today sees the launch of the weekly show Mrs. SnakePit and I will be doing to promote our Phoenix FearCon, which takes place the first weekend in November. As well as the event, we'll be discussing horror films, bringing on special guests and I'll be waving the Union Jack proudly for a Brit who managed to decapitate himself with a chainsaw as a protest. We go live at noon [Arizona time], and you can also catch the reruns later.