The irresistible rise of David Peralta

In the first of what will hopefully be a series explicitly highlighting positives about the 2014 Diamondbacks, we look at the remarkable career resurrection of David Peralta. Your regularly scheduled "24/7 bitch fest" will resume shortly. :)

Share All sharing options for: The irresistible rise of David Peralta

"If I put myself in that spot, I wouldn't have made it. He played there, he played here, just to prove that he could hit. He's one of those guys who encourages a lot of people not to give up. If one thing doesn't work, maybe another will. I am very proud that he is from my country, because there are a lot of athletes from my country that work so hard to be the best. I am so happy for him."
-- Martin Prado on David Peralta

Much like learning a knuckleball, a switch from pitching to playing a position is often the last-ditch effort of a player desperate to extend their life in professional baseball, having exhausted all more conventional approaches. That isn't always the case: as well as the Babe, Hall of Famer Montgomery Ward, who threw the second perfect game in baseball history in 1880, gave up pitching in 1884, and played a decade beyond that as a middle-infielder and compiled a career .275 batting average. Others made the switch at college: Mark McGwire and John Olerud were both originally pitchers, before it being decided that their talents at the plate were more valuable.

But David Peralta's story is virtually unique. He was drafted as a pitcher, but failed badly enough in the role, along with injury issues, that he ended up dropping off the affiliated ladder entirely. Four seasons later, he re-appeared in independent baseball as an ouffielder, and was still there in June 2013. making $700 a month. Less than a year down the line, he made his major-league debut for the Diamondbacks, and since then has done nothing but hit, batting .319 with an OPS of .832. Through 50 games, his 60 hits is a team record, and since the D-backs have been in existence, ranks Peralta tied for 21st among all rookies

Peralta signed with the St. Louis Cardinals in 2005 as a pitcher after a free-agent tryout, even though he was no slouch at the plate. Being a hard-throwing left-hander, his value was higher on the mound. "It was going to be much better for me as a pitcher," Peralta said. "At least that’s what they told me." He had a 90 mph fastball and a good breaking pitch, but he was bedeviled by poor health, needing to go under the knife more than once for problems with his labrum. Before those surgeries, he spent part of two seasons with the Cardinals' rookie ball affiliate in Johnson City, posting a 5.69 ERA with a K:BB ratio of 63:32 in 61.2 innings.

But then health derailed David's career. As he described it, "I was never the same. My arm was hurting, bothering me too much. I was like, 'I get it. (Pitching) is not for me.' " His velocity returned after the second labrum procedure, but he then developed tendinitis, and was released by the Cardinals on May 5, 2009. Many would have given up their big-league dream at that point, but Peralta didn't. "I always knew. Before I got signed as a pitcher, I used to love to hit. I made the decision to switch by myself, it’s not like anyone told me."  So, he went home to Venezuela and, with his shoulder recovered, started playing center in independent ball there, along with winter league games.

The long road back

"He’s a guy who I think really wants to make it to the big leagues as a hitter, and I wouldn’t be surprised if in two years he’s with a big league team."-Bobby Brown, Amarillo manager, June 2013

In 2011, he returned to the United States and signed with the Rio Grande Valley WhiteWings of the independent North American League. All he did was hit .392 with 17 home-runs in 85 games. The following season, he was with another indie team, the Wichita Wingnuts of the American Association, and batted .332 there. 2013 saw him traded to Amarillo, where manager Bobby Brown spoke highly of his work ethic in June last year: "He works his tail off. Every single day, no matter if he’s 4-for-4 or 0-for-4 the night before, he’s in the cage or on the field early." Brown added the prophetic quote on the right at that point - turns out, that was severely under-estimating Peralta and his potential.

Peralta admits to wondering why nobody was calling. "I was like, 'What else do I need to do to get signed?'  My parents told me to just give it time. They said it's going to happen. Just be patient." And it did: he worked out for Arizona's independent league scout, Chris Carminucci, in February 2013, but there wasn't a spot for him in the organization at that point. So started 2013 off in Amarillo, putting up a line of .352/.381/.604, until space could be found for him at Visalia, where he played the rest of the season. His numbers there were impressive enough to merit a promotion to Double-A Mobile for this year.

However, he still wasn't on the radar. Peralta didn't rate mention when John Sickels of Minor League Ball covered the top D-backs prospects in February, not even in the "also" section, and John Baragona's top 100 list at the end of last season, also omitted Peralta. Heck, even Kevin Towers admitted to being largely unaware of his story. That's understandable: having turned 26 last August he was one of the oldest regular players - never mind for the Rawhide, in the entire California League. His chances of any success still seemed long, though as John noted in his pre-season preview of Mobile, Peralta "has some ability, so we'll see if he can keep going."

Keep it going he did, with regular mentions among the Snake Stars early on for the BayBears, hitting .297 with six home-runs. But it also took some fortune for a door to open: good for David, bad for the player on the other side, A.J. Pollock, who suffered a broken right-hand after being hit by a pitch at the end of May. Our outfield depth was already being tested by Mark Trumbo's injury, which gave Ender Inciarte his chance. And alternative Alfredo Marte had been sent down just a few days prior to Pollock's injury, having hit an underwhelming .227 with no walks or home-runs in four weeks with the club. The call was made to Mobile - and the rest is, as they say, history. 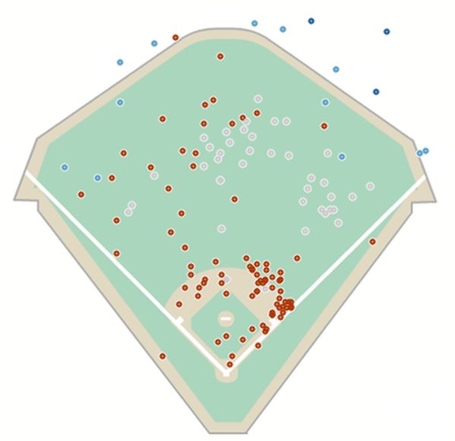 Peralta profiles as something a of pull hitter, with only five of his hits having gone the other way. However, the majority (35) are back up the middle, with 20 being to right field. Carminucci said of Peralta, "He can hit the inside fastball. A lot of guys in the independent leagues can't do that. That's why they are there." David concurs: "A lot of people tell me I have quick hands and good pop and everything. I work to get better all the time, but that's natural, the swing." But he could work on taking more walks: this wasn't a problem at Mobile, where he had 18 walks to 21 strikeouts, but he has only nine  in 198 PAs here.Especially if he's going to hit leadoff, that needs to increase.

That would help counteract likely regression from his BABIP, which sits at .359, 60 points above league average (.299). Some of that is the result of Peralta putting good wood on the ball, with a line-drive rate at 28%, which is also higher than most (MLB average is 24%), and Peralta's speed may help too, though he has only three infield and no bunt hits to date. Defensively, he probably profiles better as a corner infielder, rather than in center where has made 13 of his 45 starts to date. Though it's early days, he could also improve on the basepaths, with only a 60% success rate in his stolen-base attempts.

It has been a spectacular rise for Peralta, but with every multi-hit game, the concerns about small sample size become a little less relevant. We probably can't expect him to hit over .300 indefinitely, and since he turns 27 next week, there may not be much more physical upside - though on the other hand, he may still well be learning, given his late transition to being a position player. At least, if we need someone to pitch the 19th inning against the Phillies, he gives us a good candidate!

It will be interesting to see whether the team have enough confidence in Peralta's future, to commit to him going as a full-time roster member going forward. With the more senior Trumbo and Cody Ross under contract for next year, and Pollock reclaiming his place when he returns from injury, the trade of Gerardo Parra would seem to make room for Peralta. He does have some sharp platoon splits in the majors (OPS .890 vs. 607, though small sample size applies), so a platoon situation with the right-handed Ross and Trumbo could be the best use of their offensive skill-sets.