Vidal Nuno's tenth start as a Diamondback was perhaps his best to date, but the end result was no different: he still remains winless, as the offense was blanked by Tyler Matzek and the Rockies.

Yep, as the above says, we're now back in line with the 2010 campaign, in terms of futility. They only went 9-18 the rest of the way, and I think we're probably slightly better than that. But the defeat tonight also means the Diamondbacks have to win tomorrow, or August will see them with a worse record than they had through the end of April. S'funny how this month hasn't hurt anywhere as much: I guess the pain of the defeats has just become so much background static by this point in the season. However, we are now officially at the five-sixths point of the season after this one, so it's all downhill from here, folks!

No blame should be attached to Vidal Nuño, who delivered another in a line of excellent performances since coming over from the Yankees. Tonight, if was eight innings of one-run ball, with only two base-runners allowed. The resulting Game Score of 81 is tied for the second-best by any Diamondback starter this season, trailing only Josh Collmenter's momentous 27-up game against Cincinnati in May (which was an 86). Interestingly, it's ties with a start on May 14, which an exact match, also eight innings, with one run on a homer, two hits, no walks and seven K's, That was by... Brandon McCarthy, the man for whom Nuno was traded.

That's now 10 starts for Nuno with Arizona, and his performance has been pretty damn impressive:
Nuno: 61.1 IP, 45 H, 24 R, 22 ER, 12 BB, 49 K, 3.23 ERA
Of course, that's still a little higher than McCarthy's for New York (2.47), but considering the difference in salary, and the fact that McCarthy will be a free-agent at the end of the Yankees' season - which I'm hoping is in about a month - while Nuno is under team control through at least 2019, I'm cautiously optimistic. But since it's still less innings than he pitched in New York, I'd like some more good outings before I'm a true believer.

But, dammit, what does he have to do to get a win? In his ten starts, the Diamondbacks offense have now scored a total of 27 runs, and have been held to two or fewer half of the time. It's almost amusing at this point. Tonight, we were held to five hits, all of them singles - two were by debutant Nolan Reimold, who has as many hits in his first game, as the man he replaced, Xavier Paul, had in his entire Arizona career, which lasted 14 contests and about three weeks. Cliff Pennington had a hit and a walk, but the heart of the order, slots four through seven, were a combined 0-for-13. Let's review all our at-bats with runners in scoring position. It won't take long:

Really, you wonder if the team might have been better off signing the various alumni hanging around Chase Field tonight, to a bunch of one-day contracts, and sending them to the plate instead. With one day left, this is almost certain to be the most wretched offensive month, by OPS, in the history of the franchise. Tonight also set the Diamondbacks record for the longest taco-free streak i.e. consecutive games scoring under six runs. This was the 18th in a row: man, Taco Bell executives must be delighted by their sponsorship deal this season. Still got some way for the recent NL record, which is 25 by the Astros and Marlins in 2012. But it's not inconceivable.

Nuño's spot came up, leading off the bottom of the eighth inning, and with Arizona 1-0 down at that point, it did make some sense to replace him with a pinch-hitter. I just wish we had someone better than Jordan Pacheco and his .487 OPS for the job. That went about as well as you'd expect, and Matt Stites then came in to relieve Nuño, and instead allowed the Rockies to double their lead on another home-run. There was a brief flurry of hope as we put two on in the bottom of the ninth, as noted above, but our Win Probability there peaked at 8.5%, so it wasn't much of a hope flurry at all, really. 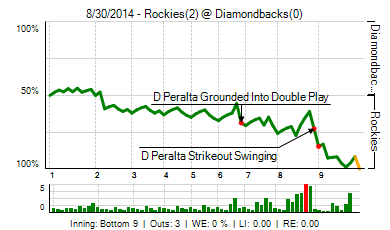 neither do the Rockies fans.

It's the rubber game tomorrow, and with both this series and the Houston/Texas one having seen the first two games split, there hasn't been any movement in the Tankapalooza standings. Tomorrow is for all the marbles there then, with Chase Anderson taking on Jorge de la Rosa. And it's a guest recap, so after three in a row, I don't have to do it! Woo-hoo!