You ever see a heavyweight boxing match where the two pugilists stand toe to toe, slugging it out for 15 rounds? Well, this was nothing like that.

No, this was more like watching two blindfolded drunks, attempting to fight it out on the deck of a cargo ship going round Cape Horn in a heavy sea. There was an awful lot of flailing, no actual damage done, and victory ended up going, not to the strongest, but to the marginally-less incompetent. Another possible simile: this was like two fat men trying to negotiate a revolving door, alternating between trying to rush through it simultaneously, and yelling politely at each other, "No, after you..." If you were under any illusions why these teams had the second- and third-worst records in baseball, this game would be Exhibit A.

The starting pitchers did exhibit a modicum of ability, though it's hard to tell how much is due to who they were facing. Certainly, Christian Bergman and Josh Collmenter gave at least an illusion of domination through five innings, with each side having managed only one hit. The Rockies got theirs leading off the game, while the Diamondbacks had to wait until after their position players had gone 0-for-12 before Collmenter, apparently realizing no-one else was going to bother, doubled with two outs in the fifth. The teams also traded strike 'em out, throw em out double plays: Montero gunned one down in the first, but was the caught stealing in the second.

The Diamondbacks finally broke the deadlock in the bottom of the sixth inning, but required some significant help from the Rockies to do it. David Peralta tripled with one out, and Mark Trumbo was intentionally walked, that marking the end of Bergman's night. The move worked for Colorado, as Montero then struck out, but after a passed ball let Trumbo move up to second, the new Colorado reliever then uncorked a wild pitch, and Peralta was able to scurry home, giving us the lead. Jake Lamb grounded out to strand Trumbo on third.

However, the lead proved short-lived, and was handed back in similar fashion: as with the Rockies, our starter left with a clean sheet, but a runner on base, and the bullpen was unable to strand the runner they inherited. With one out, a bunt single signaled the end of Collmenter's night, surprisingly early. He had thrown only 81 pitches to that point, and with 6.1 shutout innings under his belt, and just one batter over the minimum faced, I was thinking he might have a shot at a complete game. Kirk Gibson was of a different mind, however. Oliver Perez got a K, but he was then replaced by Evan Marshall, who gave up an RBI double, costing us the lead and Collmenter the decision.

After Arizona went down in order during their half of the seventh, worse was to follow in the top of the eighth, as Brad Ziegler's recent struggles continued. He got the first out, but then loaded the bases on three straight singles, and a sacrifice fly gave Colorado their first lead of the night. This has definitely been one of the worst spells in Ziegler's career, and he has this line over the past month:
Ziegler: 12 IP, 17 H, 11 R, 9 ER, 6 BB, 6 K, 6.75 ERA
His August ERA with two games left is 7.20. He hasn't had a monthly ERA within three runs of that since June 2010.

But the bullpen giveth and the bullpen taketh away. For if we thought Ziegler was a bit shaky, here's Rex Brothers of the Lolorado Rockies to demonstrate the true meaning of "gurgling vortex of suck." 17 pitches later, he had walked them full, without retiring a batter, on three walks and a wild pitch. Based loaded, no outs. What could possibly go wrong? Well, Mark Trumbo hitting a comebacker to the mound for the first out, as a starter. And follow that up with Miguel Montero whiffing for the second out. Where those two well-paid veterans had failed, it was up to rookie Jake Lamb to come through in the clutch. Could he do it?

Hell, yeah. Of course he could. It was the third grand-slam hit by the Diamondbacks this year, all three of them having been by our rookies: Alfredo Marte on July 25, then David Peralta on August 9, and now Lamb. According to the D-backs' Josh Rawitch, that makes us the first team with three different rookies to have a grand slam since the 2006 Indians. In Clefo's piece today, hotclaws was asking why we still watch the games: I think it's moments like the above which are a large part of why I still tune in [although in this case, it was waiting for "in play, run(s)" to turn into something more meaningful!] Addison Reed then closed it out for his 100th career save, and 11th straight. Boom. 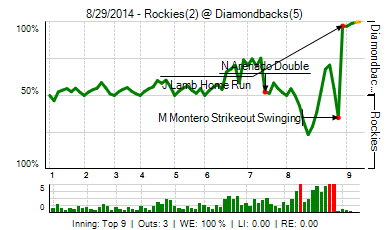 Numbers above are approximate, since Fangraphs is playing up, and hasn't put up hitter totals, so I had to plow through the game log. I think we ended up just short of 150 comments in the GDT, which has got to be close to a low-water mark for the season. Can't say I'm too surprised. Still, it was very close at the top: hotclaws and GuruB were tied for first, with JoeCB1991 and preston.salisbury just one behind. Also present were: AzRattler, Clefo, Diamondhacks, Hazzard21, Jim McLennan, MrMrrbi, Zavada's Moustache, david.munter, imstillhungry95 and soco. Comment of the night to preston, which I shamelessly ripped-off for the title.

Heath Bell Syndrome is like the Chicken Pox. Even if you get rid of it, it comes back as the Shingles of bullpen failures.
As of 8/23, owes Addison Reed dinner.

We reconvene tomorrow night at 5:10pm, for the same two teams to demonstrate the game of baseball played at the highest level. Or something. It's Vidal 'No-decision' Nuno vs. Tyler Matzek in that one.