Diamondbacks 3, Pirates 2: No fights, but plenty of fight

As I suspected, there did not appear to be any carry over of last night's plunking of Andrew McCutchen to today's game, which was played by both sides as if butter wouldn't melt in their mouths. But plenty to talk about, not least the weird ending.

Share All sharing options for: Diamondbacks 3, Pirates 2: No fights, but plenty of fight

To be honest, I really wasn't expecting much from this game, seeing the line-up. The total fWAR of our nine starters this afternoon was just 1.2, the bulk of that due to Ender Inciarte (0.9). As a contrast, Andrew McCutchen alone has been worth 4.5 fWAR. For such a low tally to be achieved by the Diamondbacks this late in the season, is testament both to the ravages injury have wreaked on the team, and the general suckiness of those who still have all their functioning limbs. Of course, we end up with Tuffy Gosewisch getting two hits and a walk, scoring most of our runs, and making several key defensive plays. #Youcantpredictbaseball.

Where to start? Let's begin with Trevor Cahill, because lost in all the mayhem of the way this one finished, will probably be the fact that this was definitely an encouraging sign from our struggling starter. He worked seven solid innings, allowing seven hits and one run, with one walk and seven strikeouts. The last-named was particularly good to see, as he had struck out only a total of eight batters over his previous three starts since coming back from the minor-leagues. With a Game Score of 65, it was easily his best of the season: he has only reached 50 once, getting 56 all the way back on April 2.

Of course, that wasn't enough for his first W since April 23 - which remains Cahill's sole victory. That has been the way of Diamondbacks starters this series, who completed it with 19 innings of work and a 1.42 ERA, but a trio of no-decisions. Even before then, it's how things have been for our starters of late: they have only picked up one win in the past thirteen games, despite allowing two earned runs or fewer over six or more innings, more often than not during that time. Evan Marshall (who got the W today) and Oliver Perez each have more W's than all of our rotation put together, in the past two weeks.

Cahill wobbled in the second, putting men on second and third with no outs, but escaped with an RBI groundout. The Diamondbacks came back with two in the third to take the lead, beginning with Gosewisch legging out an infield single and Nick Ahmed walking. A good bunt by Cahill moved them over, and both men then scored on a groundout by Ender Inciarte and Jordan Pacheco's RBI single. Both sides had chances from there through the seventh, and couldn't cash them in. Arizona got a lead-off double from Trumbo in the fourth, before Alfredo Marte lined into a double-play, while Inciarte singled to open the sixth, then was out trying to turn it into a double.

Brad Ziegler opened the eighth, for his nineteenth consecutive appearance. Or maybe it just seems that way. A single and a double raised the threat level to Red, and all things considered, we were lucky to get away with only one run conceded, on a sacrifice fly. After any intentional walk, Russell Martin hit a grounder to Ahmed, who threw to Trumbo for the out - the runner on second motored around third, trying to score, and Mark alertly threw home for Gosewisch to apply the tag. There was a nervous moment, as the play was reviewed, but to a collective sigh of relief, the play stood as called.

Addison Reed looked good in the ninth. Actually: really good, as in he struck out all three batters faced, which is something which has only happened once before this year, on June 20. And Evan Marshall also had to pitch out of a jam in the 10th, getting consecutive strikeouts after having runners on second and third with no outs. All told, we struck out 12 Pirates today, and they went 0-for-10 with runners in scoring position. In the bottom of the 10th, Gosewisch got a one-out double, advanced on a wild pitch and Ahmed was then walked. That brought up Andy Marte, who....

Nah, I probably can't describe it in under 20 minutes, so here's the video of the final play. Go look at that: we'll wait here. Should it have been called interference? That would be under rule 7.08(b), which says "Any runner is out when [he] intentionally interferes with a thrown ball; or hinders a fielder attempting to make a play on a batted ball;" 7.09(f) is similar, saying it's interference " If, in the judgment of the umpire, a batter-runner willfully and deliberately interferes with a batted ball or a fielder in the act of fielding a batted ball, with the obvious intent to break up a double play." However, in particular, here's a grab of the frame where the ball hit Ahmed's arm: 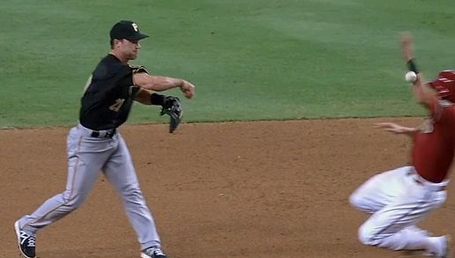 I think it would be hard to argue Ahmed is "intentionally" blocking the throw, especially considering how close he is to the fielder, who was clearly not lollygagging the ball over to first-base. Ahmed's form looks pretty normal for a slide into second-base with intent to break up the double-play, which would be perfectly legitimate. The play is a judgement call, and so was not reviewable. But to me, it's closer to the situation on a pick-off where the runner is caught going to second, and a thrown ball from the first basemen then hits him. The throw hits Ahmed. He doesn't block the throw.

The crew chief seemed to concur, explaining to Zach Buchanan, "It has to have been willful and deliberate with obvious intent to break up a double play. The guy has to do something obviously, willfully, intentionally to break up that double play. Guys slide into second base all the time with their hands up." All told, I don't think the umpires "gave" that one to the Diamondbacks, but we certainly got pretty freaking lucky. It was definitely also one of the weirder walk-off celebrations I've seen, with a delay after the runner crossing home, while the opposition yelled at the officials. 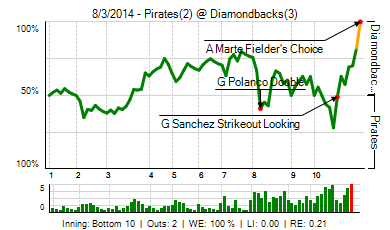 An off-day tomorrow, before we welcome the Kansas City Royals to town. Wade Miley takes on Danny Duffy at Chase on Tuesday night, with the first pitch at 6:40pm.