Diamondbacks 1, Dodgers 3: About as well as expected

A charity telethon took place at Chase Field this evening, occasionally interrupted by a baseball game. On the whole, the telethon was probably the more worthwhile endeavor.

Share All sharing options for: Diamondbacks 1, Dodgers 3: About as well as expected

Well, we didn't get no-hit. We actually managed to score against Clayton Kershaw. But anyone hoping for a repeat of the last time Kershaw started at Chase Field was in for severe disappointment. The Diamondbacks offense did actually have some chances, even after falling behind 3-0 in the third inning. But we were only 2-for-11 with runners in scoring position, and wasted a litany of opportunities in the middle innings. Beyond that, there was perilously little to be seen; after a leadoff triple in the fifth, 15 of the last 16 Diamondbacks were retired, the sole exception being a two-out single by Mark Trumbo in the eighth.

It was also a fundraiser for the Diamondbacks "Give Back Jersey Program", which provides uniforms for little league programs. I should mention this, because it might just have escaped your notice if you were watching the telecast, since the in-game mentions were so subtle and understated. [Yes, this is sarcasm] Between the autographed balls and matching funds from a sponsor, over $200,000 was raised. A laudable goal, but you could argue, it's fans paying to turn 11-year-olds into little walking franchise billboards. It's almost like Fry's having a charity event, to get customers to pay for their advertising. Truly a marketing masterstroke.

Probably just me though, since this is the kind of game which would leave anyone in a grumpy frame of mind. I didn't have great expectations going in, and its safe to say the Arizona offense didn't live up, even to these. The Taco famine has now reached 16 games. There has only been one longer streak without reaching six runs in franchise history, a 17-game streak which ran from August 30 through September 16 in 2009. The good news is, after tomorrow's off day, we have the woeful Colorado Rockies coming to town, so I'm thinking there's a good chance the streak ends this weekend.

At least my nightmares of a Kershaw perfecto didn't last long, as he walked Ender Inciarte on four pitches to open the game. Inciarte then stole second - his 12th SB of the year, and he has only been caught stealing twice (Gerardo who?) - but was stranded there as Mark Trumbo struck out swinging. After a couple of scoreless frames, it was unsurprisingly the Dodgers who got on the board first, with a three-run third. Dee Gordon laid down a bunt single that seemed to catch Tuffy Gosewisch by surprise, the Puig walked, and Matt Kemp drove a pitch over the head of Inciarte for a two-run double, though was out by some distance trying to stretch it into a triple.

That proved helpful, as Miley killer Scott Van Slyke crushed a pitch to left field, for what could have been a two-run homer, but was only a solo shot, making it 3-0 to the visitors. We had an immediate chance to strike back, loading the bases with one out in the bottom of the third, on singles by Didi Gregorius and Ender Inciarte, plus a walk to Cliff Pennington. However, the offense came up empty again, with Aaron Hill only managing to pop out on the infield to the second baseman, and Trumbo leaves the ducks on the pond with a flyball to left.

We did get on the board in the fourth. Alfredo Marte doubled, and Jordan Pacheco dropped a ball just in front of a diving Puig. Van Slyke twisted his ankle going for the ricochet, and that allowed Marte to scurry home, and Pacheco to advance to second. But the Diamondbacks' hitters were once again unable to come through, and Pacheco was left on second. Worse was to follow in the fifth, as Inciarte led things off with a triple down the right-field line, giving Arizona a golden opportunity to pull within one. But Cliff Pennington struck out, Hill popped out again and Trumbo went down swinging. As noted above, that was the last of any meaningful offense for us.

Miley did manage to get through six innings without any further damage, despite clearly having problems locating his pitches. That was apparent from the off, as he went to at least three balls on five of the first six batters he faced. He ended with a line of three runs allowed over six innings, scattering seven hits and four walks, with six strikeouts. Miley was helped out by a great CS from Gosewisch in the sixth, but Wade took the loss, dropping to 7-10 on the season. Oliver Perez and Evan Marshall then combined for a scoreless eighth, and good to see Brad Ziegler have a decent outing, putting up zeroes in the eighth and ninth, with one hit and five ground-ball outs. 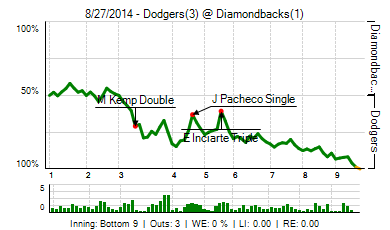 About the Gameday Thread one would expect, ending at or near 200 in total. DbacksSkins, Paulnh and hotclaws were the only ones to reach 20, with the others re-arranging their deckchairs being: 4 Corners Fan, Arizona Eyebrows, Clefo, Diamondhacks, GuruB, Hazzard21, Jim McLennan, JoeCB1991, MrMrrbi, SongBird, asteroid, david.munter, dsadbacks2001, onedotfive, preston.salisbury and xmet. A trio of comments reached five or more recs, from Clefo, onedotfive and hotclaws, and I award the last-named comment of the night for this:

There's a day off tomorrow, so at least we can't lose! Woo-hoo! We get under way again on Friday night, with Josh Collmenter taking on something called a Christian Bergman, as the Rockies arrive. We need to take two of three to avoid a worse month than we had in April.