Diamondbacks 5, Padres 2: Nuño the above

Poor Vidal Nuño. It seems that taking a one-hit shutout into the eighth inning isn't quite enough to deserve a win. You're just going to have to take it all the way yourself, next time.

Share All sharing options for: Diamondbacks 5, Padres 2: Nuño the above

On the plus side, the Diamondbacks did score more runs in a Vidal Nuno start, than they have ever done before. Of course, the majority of those didn't come until after he had left the game, but baby steps here, people. As a result, he managed to avoid victory for the ninth consecutive start to open his Arizona career. That ties him with Willie Blair, who did it starting off the franchise back in 1998, though Nuño has pitched a damn sight better for Arizona than Blair: in his nine outings, he went 0-7 with a 5.82 ERA. The only longer winless opening streak belongs to Max Scherzer, who went 13 straight. But at least the D-backs did win in the end, after having lost Nuño's eight previous starts.

Things certainly started off in promising fashion. Nuño retired the Padres in order, and the Diamondbacks then took the lead before their first batter was retired. Ender Inciarte opened things up with a double to right, and Cliff Pennington singled past the first-baseman into right, to get the Diamondbacks on the board. More was to follow in the second, as Jake Lamb led things off by opening his home-run account in the major-leagues with a solo shot that went an estimated 392 feet into the pool area at Chase. [Random factoid: longest homerless streak to start a career with Arizona? 75 games by Alberto Callaspo]

Staked to a lead, Nuño worked quickly and efficiently through the next five innings. The only base-runners he allowed through the end of the seventh were a lead-off single in the third, stranded on second, and a one-out walk in the fourth, erased immediately when the next batter lined out back to the mound, allowing Vidal to flip the ball over to first and complete the double play. Better yet, he had been remarkably efficient doing it, requiring only 72 pitches to reach the 21st out. Having thrown 117 pitches in a game earlier in the season at Philadelphia, would this prove to be our second shutout of the season, Josh Collmenter having missed out last night?

The eighth inning, unfortunately, did not appear to have received the memo, and it looked a very different Nuño who came out in the bottom half. He hit the first batter faced then, after getting an out, allowed a single and a walk, loading the bases, still with only one down. Gibby was booed last night by the crowd at chase for pulling his starter in the ninth, but that was a very different situation. Here, the tying run was now on second-base, and we can;t blame Gibson for wanting to go to the pen. Still, Vidal deserved the standing ovation he received as he left, with a line of 7.1 IP, 2 H, 2 BB and no runs allowed... to that point.

Oliver Perez, unfortunately, did not appear to have received that memo. With a couple of left-handers up, he was the chosen option rather than Ziegler - which I can't say I mind too much, given how shaky Ziegler has been of late. Perez did get the first batter, but then caught far too much of the plate with an 0-2 pitch to the next one, and it was chopped back up the middle, just out of the reach of both Perez's lunge, and the gloves of our converging middle-infielders, for a two-run single. Vidal found himself once home dating No-Decision Nancy, the baseball cousin of Friend Zone Fiona.[Yeah, I know., 2011 called, they want their meme back]

Have I mentioned today what a shitty stat the W is? Today would be a fine example. Perez got the third out, and so became the pitcher of record, due to what happened in the bottom of the eighth. With the wonderfully-named Kevin Quackenbush on the mound (I don't normally bother naming opposing players, since we largely don't care - but I always have room for a Quackenbush), Alfredo Marte drew a walk. Lamb singled and Didi Gregorius then took advantage of an equally-misplaced 0-2 pitch, depositing it over the fence in right for a three-run homer. Seems that's all Didi does of late: since August 9th, he has had only one hit that didn't leave the park.

Addison Reed came in for the ninth, and closed out his 10th consecutive save opportunity (preston.salisbury now owes him dinner!), and 30th of the year. That's a fairly elite club of Arizona closer he just joined, being only the fifth to reach the mark after Gregg Olson (1998), Byung-Hyun Kim (2002), Jose Valverde (2007) and J.J. Putz (2011 + 2012). Inciarte and Lamb each ended the day with a pair of hits, while Miguel Montero reached base three times on a hit and two walks. Nice to win consecutive games: can we finish it off tomorrow and get three, for the first time since we swept the Cubs in the opening series after the All-Star break? 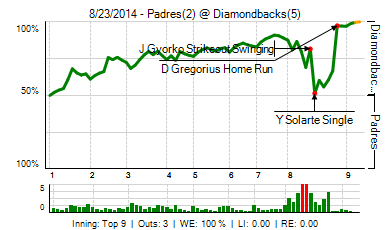 50% better turnout in the Gameday Thread than last night, despite the lure of alternative televisual treats, as hinted at above. Paulnh, freeland1787 and AzDbackfanInDc were the three most active, with the others present as follows: Diamondhacks, GuruB, Jim McLennan, JoeCB1991, Makakilo, SongBird, Zavada's Moustache, asteroid, benhat, cheese1213, hotclaws, onedotfive, porty99, preston.salisbury and shoewizard. Comment of the Night to freeland:

It's back at Chase tomorrow for the series finale, with Arizona going for the sweep, with former D-back Ian Kennedy going up against Chase Anderson. It is, of course, also going to be SnakePitAsteroidFest, so there'll be a bunch of us acting like fools in or around section 139. It should be a lot of fun. Expect an early game stream, since we'll be out the door around 10:30 am....