Ever go on a trip where the accommodation is lousy, you catch dysentery, the locals are downright hostile, so you can't wait to get back, kick off your shoes and slump into your own comfy sofa? Tonight's game was kinda like that homecoming.

Share All sharing options for: Diamondbacks 5, Padres 1: Josh the boss at home again

We wish to register a complaint. We tuned into tonight's game, eagerly anticipating three hours of mediocre pitching, feeble offense and defensive miscues, which could be mocked, derided and generally contribute to the ongoing sense of apathy and depression which has enveloped us as Diamondbacks fans this season. After the way the recent road-trip ended, it was clear that this was what we should expect for the rest of the year. So, imagine our shock and horror to find timely hitting, solid work on the mound and even defensive excellence. Where are our 2014 Diamondbacks, and what have you done with them?

Yeah, it may have been a rarer occurrence than Kate Bush playing live, but tonight was one of those games where we actually gave a credible impersonation of a decent baseball team. The Diamondbacks scored as many runs with two down in the first inning, as we managed over the previous 29 innings combined, coming a double short of hitting for the cycle between the second and third outs. David Peralta got things going with his 7th triple - already the most by a D-back since Gerardo Parra's eight in 2011 - and Mark Trumbo then knocked a ground-ball into the shortstop hole, legging it up the line to beat out an infield RBI single.

Hooray! We got a hit with a runner on third and two outs! But there was better - much better - to come, as Miguel Montero followed up by cranking the first pitch he saw, low and hard down the right-field line. It clanged off the foul-pole there, three or four feet above the yellow stripe, for his 13th home-run of the season, a two-run shot which put the home team up by three. That's the first time we've had a three-run lead at the end of any inning, since David Peralta's grand-slam gave us a 14-4 win over the Rockies on August 8. We added on in the second, Jake Lamb taking advantage of a Padres error to scurry home, and in the eighth, Lamb had an RBI groundout to make it 5-0.

Of course, rediscovering the lost art of "scoring runs" is only one half of the equation of winning baseball. The other half is tiger blood good pitching, and we got that in spades from Josh Collmenter. There had been concern after his abbreviated last outing, Collmenter having to assure Kirk Gibson that he wasn't suffering from fatigue or some other kind of physical issue. Whatever had ailed Josh in Miami, clearly wasn't a problem tonight at Chase Field, as he blew through the Padres. His velocity seemed better this evening: maybe part of the reason why he pitches better at Chase is the dry desert air helping his velocity a tad? Just a speculation.

Whatever the cause, he was virtually impeccable through the first eight innings, facing just one batter over the minimum, having allowed two hits and no walks, with a season-high seven strikeouts. With the chance at only our second complete-game shutout of the season [Collmenter also had the first, against the Reds on May 29], he went out there for the ninth, but after allowing two singles around his eighth strikeout, he was lifted. Matt Stites came in, and while he got the second out, it left runners on the corners and Montero then allowed a passed ball, which ended hopes of our fifth shutout of the year.

Still, even the toughest of fans would be hard pushed to quibble with Collmenter's line this evening: 8.1 IP, 4 H, 0 BB, 8 K, 0 ER, and he fully deserved the thunderous ovation he received [the crowd was also unimpressed with Kirk Gibson's decision to take him out!]. That drops his ERA for the year at Chase down below three, less than half of what it is on the road, 6.04. Quite why there's such a big discrepancy, I'm not sure: it may purely be luck, considering that coming into tonight's game, Collmenter's BABIP at home was .226 (and has probably dropped further, with a figure here of .200), while away from Chase it was all the way up at .391.

Elsewhere, even the defense played its part tonight, right from the start when Collmenter made a fabulous reaction grab of a liner back to the mound, for the second out in the first inning. That was the start of an evening of sound, fundamental baseball, highlighted by two plays in the top of the third inning. First, Ender inciarte made a very good play on a ball hit in front of him at center, diving to make the second out. This was followed the next batter up, by Peralta getting an outfield assist, on an ill-advised attempt by a Padres baserunner to go first to third on a single, which turned into the end of the inning. All told, quite a change from the horrors of the road-trip. 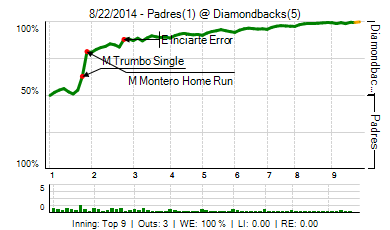 For unsurprising reasons, only a few people apparently about to witness this. Just a dozen people in the comments thread, with GuruB and preston.salisbury tied for the top spot, with Paulnh in third place. Also present were: Diamondhacks, Jim McLennan, Makakilo, Rockkstarr12, SongBird, asteroid, dsadbacks2001, hotclaws and shoewizard. No comments went red, but given the low turnout, that's not too surprising, so we'll go with paulnh for Comment of the Night

Actual runs are the best.

At 2:21 this was tied for the quickest game of the year at Chase, just one minute behind the fastest of the season overall, when Bronson Arroyo and Adam Wainwright faced off in St. Louis on May 20th. Tomorrow is a 5:10pm first pitch at Chase, as we see Vidal Nuño take on Andrew Cashner of the Padres.