Vidal Nuno's fifth start for the Diamondbacks was extremely solid, as he worked six innings, allowing only one run - and with non-Trumbo defence in left field, it could have been six shutout frames. He allowed three hits and two walks, striking out five and left with a 4-1 lead. That came mostly courtesy of a three-run jack from Ender Inciarte in the fifth, after an unusual challenge led to Nuno being awarded a hit by pitch. David Peralta's speed help lead to a fourth run that frame, and Nuño appeared to be on the way to his first win as a Diamondback.

Unfortunately, the Arizona relief crew had other ideas. Randall Delgado got through the seventh, but he and Eury de la Rosa combined to allow three runs in the eighth, tying things up. But that was a mere drop in the bucket compared to the horror that was Bo Schultz in the ninth, who faced nine batters, and retired only two of them, with five coming across the plate to score. The total line for our bullpen this evening: three innings of work, ten hits, three walks and eight runs allowed. Peralta did have two hits and a walk, and Mark Trumbo got a pair of hits, but this one took the express elevator to hell.

Turambar will be along with the International Beer Day recap shortly. 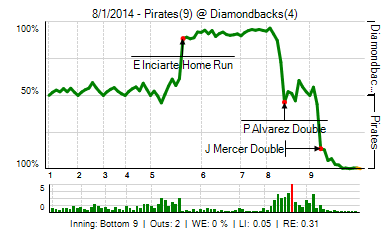 GuruB edged the top spot in the Gameday Thread, with at time of typing (two outs in the 9th) a triple tie for second between  JoeCB1991, DbacksSkins and preston.salisbury. Sort it out yourselves. Also present were AzRattler, Clefo, DeadmanG, Hazzard21, Jim McLennan, , Steven Burt, asteroid, blitzred1, catbat, freeland1787, hotclaws, shoewizard and txzona. Nothing received more than two recs, so I'm taking my Comment of the Night with me and going home.