Remember that game, the last time when we were in Miami, where Gerardo Parra led off things with a home-run, and that was it for scoring? Tonight was more than a little like that.

You'd have got fairly long odds on both starters tonight being there in the seventh inning, after a first in which they combined to allow five runs on seven hits, including a pair of home-runs. The Diamondbacks got things going in their half, with a three-run first, courtesy of home-runs from Cliff Pennington and Aaron Hill, around a single by Mark Trumbo. It was Pennington's first long ball in over a year, the last one coming on May 1st, 2013 off Tim Lincecum. It was Hill's tenth of the season, his first of August, and staking the D-backs to a three-run lead, we looked forward to an entertaining blowout.

Trevor Cahill, however, had other plans, giving up hits to four of the first five Marlins batters to come to the plate, taking our early three-run advantage and offering the Marlins an immediate 67% discount on it. With two in, two on and only one out, things were looking particularly grim, but Cahill got an inning-ending double-play to escape further damage. That would turn out to be one of the ongoing themes of the night, with Miami hitting into four of these, two each by Jarrod Saltalamacchia and Casey McGehee. The latter now has 25 for the season - for comparison, Martin Prado has only 18 to date. McGehee needs eight more this year for the NL record.

The Arizona offense appeared to check out beyond that point. The rest of this paragraph should be more than enough room to cover what they did. 3rd inning: Ender Inciarte walk. 5th inning: Cahill and Inciarte singles. 6th inning: Alfredo Marte walk. 8th inning: Pennington single. Probably the fifth inning was the closest we came to adding on, as we had two on with one out, both men then advancing on a groundout. However, David Peralta's recent slumpage continued, and he couldn't bring the runners home. Since his grand-slam against the Rockies, he is now 1-for-23 with 10 strikeouts, and our #3 hitter was even told to lay down a sacrifice bunt in the eighth.

Fortunately, the Marlins' bats weren't proving any more productive, though as noted above, we were helped by their fondness for hitting into twin killings. Those ended the first, third and eighth innings, and erased a leadoff walk in the sixth, so their importance can not be over-stressed. Saltalamacchia ended up at -33.4% of WP, which would be the fourth-worst by a Marlin this year: he and McGehee own all of the top four spots, with the latter's -33.5% from yesterday being third.

Their best chance came in the seventh, which also saw the end of Cahill's night. He got the first two outs without much difficulty, but then gave up a single, wild pitch and hit batter before being lifted after 104 pitches - only 55 of those were for strikes. Still, it was an effectively ugly performance, as he went 6.2 innings, giving up six hits, three walks and the hit batter, with three strikeouts, but only the two first inning runs. He was responsible for the two inherited runner, and Matt Stites didn't inspire much confidence, uncorking a wild pitch and walk of his own, to load the bases, before getting a ground-out to Didi Gregorius to end the inning.

In the eighth, Stites then gave up a one-out single, and was replaced by Oliver Perez, who walked the first batter he faced, before coaxing the night's fourth and final double-ball play. After that, Addison Reed's ninth inning was a bit of a dramatic anti-climax, with a loud out to open his 1-2-3 inning, the only moment of real worry. Pennington had two of Arizona's six hits, and Inciarte a hit and a walk, but I think the best think about this game was that it was over and done with in less than three hours. After having had more than ten and a half hours of game play between Wednesday and Thursday, this felt like a lightning round of baseball in comparison. 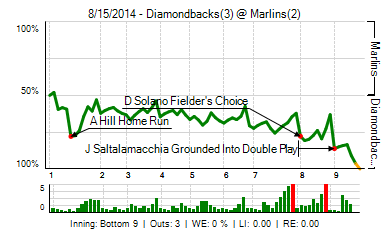 A tense but entertained Gameday Thread, with Paulnh leading the way ahead of JoeCB1991, with GuruB and freeland1787 tying for third place. Also to be seen were: Arizona Eyebrows, Jim McLennan, Makakilo, Rockkstarr12, SenSurround, SongBird, Turambar, cheese1213, hotclaws, imstillhungry95, onedotfive, piratedan7, preston.salisbury and shoewizard. Taking Comment of the Day in a virtual landslide was SenSurround, for his description of the reaction to Pennington's home-run

The dozens in attendance are stunned

It's back at Marlins Field/Park/Stadium tomorrow, where Wade Miley will take on Henderson Alvarez. It's another 4:10pm start in Arizona.