I hope Jason Marquis was worth it, Kevin Towers.

Inevitably, this is the kind of game which results in over-analysis, regardless of whether or not it's justified. If Trevor Bauer had a bad outing, then the Diamondbacks did the right thing in getting rid of him. If he was lights out, it proves just how stupid the team were in trading him to Cleveland. The entire result of the trade would be definitively decided by what happened this afternoon in Progressive Field. Oh, hang on: the reality is that those who already thought in one direction would find data to confirm that opinion, while those who thought otherwise would find reason to overlook whatever data resulted.

The above paragraph was written, in suitably generic style, before the opening game of the double-header got under way, but those critical of the trade will have found a great deal more to bolster their point of view  That was especially true through the front five innings, where Bauer faced the minimum, no hitting the Diamondbacks until Xavier Paul singled down the right-field line with no outs in the sixth. That came on the heels of a walk to Jake Lamb, who scurried all the way to third on Paul's hit. That allowed him to score when Jordan Pacheco hit into a double-play, allowing the D-backs to take the lead.

For Vidal Nuño was pitching a fine game himself through the front five innings [so, by the same token I guess we "won" the McCarthy trade!] He struck out five of the first six batters faced, and through his first five inning, had faced one batter over the minimum, a two-out single in the third. He then allowed a lead-off double in the fourth, but the next batter lined out sharply to Pacheco at first, who smartly flipped the ball over to second, just in time to get the runner before he could dive back to the base.

But Nuño got into even worse trouble in the sixth, and didn't last the inning. A single started the frame, and one out later, another single led to runners on second and third, as David Peralta's throw to third skittered past Jake Lamb for an E9. Nuño got a big second out, with a foul out to Miguel Montero, but with a base open, Kirk Gibson opted to pitch to the Indians' best hitter, Michael Branley, and he singled to right, scoring two - though Aaron Hill's effort to get it left a bit to be desired. The next hitter banged a pitch off the left-field wall for a double, and that was end of Nuño's afternoon: 5.2 IP, six hits, two runs, both earned, with no walks and five strikeouts.

Evan Marshall came in to put out the fire, and did exactly that, stranding two more runners. That's now 17 he has inherited over the course of the season, and none have scored - coming into today, no other reliever in the National League has inherited more than 10 runners without somebody scoring. The Diamondbacks then got Nuño off the hook for the loss in the top of the seventh. Mark Trumbo singled and Montero then lucked into a checked-swing double that pinged down fair past third-base to put men on second and third with one out. Hill tied things up with an RBI groundout, though Lamb left the go-ahead run on third.

Things looked dicey in the seventh, as Marshall seemed to pitch a good deal worse with a clean sheet, walking the first two batters faced. However, he got a big break, in the shape of some more shay Cleveland base-running. With the sacrifice bunt on, Montero threw down to second, and it took an athletic play by Didi Gregoius to stop the ball from whizzing into the outfield. But the next pitch, Miggy got it right, and the tag was applied: rather than first and second with no outs, it was first with one out. Marshall's day was over after a single one out later, and Oliver Perez came in to mop up two more inherited runners.

Bauer lasted through the eighth inning, retiring the D-backs in order to end his day, but Arizona had to work around some more baserunners when they pitched in the bottom, Perez and Brad Ziegler working around a Hill error and infield single, before putting up a zero with two more Indians left on base. There would be no such luck in the ninth innings, when Randall Delgado took the mound. He struck out the first batter, but Zach Walters - another Arizona prospect, traded to Washington in July 2011 for (derisive snort) Jason Marquis - then hammered a pitch just fair and over the fence in right-field for a Cleveland walk-off. 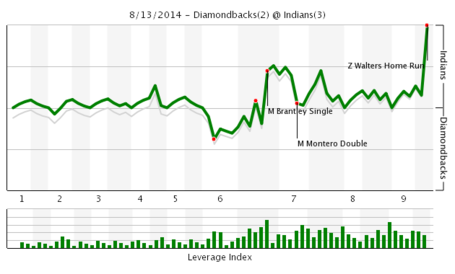 freeland1787, JoeCB1991 and hotclaws were the top three commenters in the day version of the thread. Also taking part: Clefo, Diamondhacks, GuruB, Hazzard21, Jim McLennan, Makakilo, Steven Burt, benhat, cheese1213, david.munter, onedotfive, piratedan7, porty99, preston.salisbury and txzona. No comment received more than a single rec, so we'll see if there's anything more Comment of the Day worthy in the nightcap, which will be getting under way shortly.