Diamondbacks 4, Marlins 3: Are you Addison in disguise?

That was unexpected. Matinee baseball ended in a Wednesday walkoff, as the Diamondbacks scored three in the bottom of the tenth, overturning a two-run deficit to take the series against the Marlins.

Share All sharing options for: Diamondbacks 4, Marlins 3: Are you Addison in disguise?

Up until the bottom of the 10th innings, this looked like it was going to end up being almost a carbon-copy of last night's horrorshow.

However, it appears M. Night Shyamalan must have written the script for this one. Two things bring me to this conclusion. Firstly, the implausible twist at the end where he's dead all along water is lethal to aliens it's really the modern day the Diamondbacks scored three runs in the bottom of the tenth against the Marlins closer, without making an out. And secondly, the fact hardly anyone saw it - one of the most stunning comebacks of the year was not televised on Fox Sports Arizona. So, bear in mind, what follows is almost entirely going off the play-by-play, with the odd bit of embellishment from the Twitter.

Let's start with the pitching, where Josh Collmenter rebounded from a shaky outing last time, to give the Diamondbacks seven very solid innings. Through 4 2/3 innings, he had faced the minimum 14 Marlins, with leadoff singles in both the first and second being erased on double plays. He stranded two runners in the fifth, but Miami did take the lead in the seventh, after consecutive singles with one out put runners on the corners. Collmenter gave up a sacrifice fly to Giancarlo Stanton (held hitless again, completing a miserable series where Arizona held him to 0-for-11 with six strikeouts), but stopped the bleeding there.

Collmenter stranded a lead-off double in the next inning, and that was the end of his night, with seven innings of work leading to just that single run, on seven hits and a walk with six strikeouts. It took him 103 pitches, and lowered his season ERA to 3.80. Matt Stites then came in and worked a perfect eighth inning, getting a trio of groundouts: has he been taking lessons from Ziegler? Speaking of whom, Brad himself then came in for the ninth, and got a perfect inning as well, on a groundout and two K's. Oh, look: we're going into extra innings on getaway day. This is my surprised face.

To be honest, the D-backs were kinda fortunate to have got that far, as their offense had even less success against Nathan Eovaldi than the Marlins had versus Collmenter. We got an infield single by Didi Gregorius to lead off the third, but the was the sole hit Arizona managed until Miguel Montero singled to lead off the seventh. He was then caught stealing second, on what was apparently (I certainly bleedin' hope so, anyway) a botched hit-and-run by Martin Prado. We finally did break through in the eighth, Gregorius starting with a triple, and coming home on Nick Ahmed's single, which made the score 1-1.

The Diamondbacks had their chances to take the lead, most obviously in that inning, as Cody Ross followed up with a pinch-hit single to put two on, still with no outs. A bunt moved the runners over, but David Peralta could only pop out to first and, after the inevitable IBB to Paul Goldschmidt, Miguel Montero grounded out. We also had the lead-off man on base in the ninth, Prado singling, but he was stranded on third. It was the tenth which proved decisive, starting with the odd decision to send Brad Ziegler out there for another frame. That seemed strange, considering we've an off-day tomorrow and needed only Ziegler and Addison Reed last night.

So it proved, as Ziegler ended up throwing 33 pitches, the most since August 24 last year. After a lead-off single he got the next two batters but then fell behind the Marlin hitter 2-0, and opted to put him on base. That decision backfired [as intentional walks so often seem to], as the next man up ripped a two-run double to deep left, putting the Marlins 3-1 up and in prime position to take the game and the series, with their closer coming in. But Aaron Hill (single), Ender Inciarte (walk), David Peralta (RBI single) and Goldschmidt (two-run double, his 35th already!) were having none of it,. and Arizona picked up their sixth walk-off win of the season.

This one was definitely a bit of a struggle for both sides in terms of clutch - before that tenth inning, the sides had combined to go 1-for-13 with runners in scoring position. Gregorius picked up a couple of hits, and Goldschmidt reached base safely three times, with a hit and two walks. That extended his on-base streak to 30 games, giving him sole possession of seventh place on the all-time franchise list. Perhaps most impressively, in those 30 games he has been walked 33 times and only struck out 28, a sign of how much respect he is getting. Or, perhaps, how feeble the rest of our line-up is perceived in comparison. 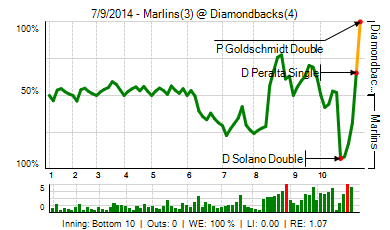 This is Reed's fault

Brad Ziegler got the W and moves to 4-1 on the season. :) Day off tomorrow - for both teams, actually, which makes me wonder why this was a day game to begin with. The Diamondbacks will resume play on Friday, Mike Bolsinger taking the mound as they open a three-game set against the Giants. Tim Lincecum starts for them, so looks like Goldie's streak will definitely reach 31 games.