Miley has been winless for so long, he was considering changing his name to NDade Miley. But this afternoon, he pitched well and the offense proved just good enough to give him his first victory in almost two months.

Wade Miley hadn't won a game in his last nine attempts. He hadn't pitched terribly, with an ERA of 4.40, but it seemed to be the case that when he pitched well, the hitters didn't show up. In eight of those nine starts, the Diamondbacks scored four runs or less. In the other, he was gone after four innings, as we beat Cleveland in five and a half hours at Chase Field. However, one of his best starts in that time came against these same Braves at Chase Field, as Miley allowed one earned run over seven innings. Could he do the same again on a warm day at Turner Field?

Early signs were a bit wobbly, as Miley put runner on the corner for Atlanta with one out in the opening inning. However, he then struck out Justin Upton and got Jason Heyward to ground out, beginning a satisfactorily frustrating performance for the Atlanta hitters, who went 1-for-7 with runners in scoring position. That hit came in the fourth, with the Diamondbacks holding on to a 2-0 lead. Something something leadoff walks, as a pair of former Arizona players combined to get the home team on the board, Chris Johnson singling back up the middle to bring Upton across home-plate and cut the lead to one.

That lead had occurred in the third inning, and also started with a leadoff walk - this one was a good deal more surprising, as it was given to Miley, who has now matched his career high with two free passes. The D-backs record, incidentally, for walks by a pitcher at the plate, is Ian Kennedy's 11 in 2012. All the more remarkable, Ian had only four hits that year, giving the highest ratio by any player (not just pitchers) with at least 10 walks since Mike Stenhouse had two hits and 12 walks for the 1986 Red Sox. However, the all-time champion is Ernie Koob, who had 15 walks and no hits at all, for the 1916 St. Louis Browns.

Two outs later, with Miley still on first, Paul Goldschmidt stepped to the plate, having already extended his on-base streak to 27 games, with an infield single in the first inning. That ties him for 9th on the franchise list - with Luis Gonzalez in 2004, so it's clear that crappy seasons can still have decent individual performances. There was nothing infield about his second hit of the day, however. There wasn't much outfield about it either, though it did end up lying there, after he smacked an 0-1 pitch down the line and off the foul-pole in the left-field corner, for his 16th homer of the season, and first since June 15th.

From the end of the fourth through the seventh inning stretch, the game galloped along, both teams sending the minimum to the plate - in our case, courtesy of the standard Martin Prado double-play ball in the sixth. Miley was lifted after allowing a single with two outs in the seventh, having thrown 96 pitches. Seemed like a quick hook by Gibson, and Miley apparently agreed, taking his frustration out on a Gatorade cooler in the dugout after being removed. But nothing to be unhappy about in his final line, of 6.2 innings, five hits, one run allowed, with one walk and eight strikeouts. On the heels of his best 2014 start in Pittsburgh, this was encouraging.

Things were nervous for a bit, as Evan Marshall came in and promptly walked the first hitter he faced, before ending the seventh with two men on base. Brad Ziegler worked the eighth, and that was similarly stressful, as a single and walk again had two Braves aboard, this time with only one out. However, Aaron Hill made a great play for the second out, and Ziegler struck out Johnson to end the inning. Welcome insurance came in the ninth, Arizona tacking on a run, after Martin Prado singled, stole second and then scored on a double by something called a Nick Evans, whatever that is [Look, I'm going to keep using that, so you might as well get used to it]

That gave us Addison Reed in a two-run save situation, which was a bit better than a one-run one. However, Reed was not standing for that, promptly allowing a leadoff single, to ensure the tying run came to the plate with no outs anyway. Fortunately, this was a day without any #ReedBombs, and he was, in fact, merely trolling us, getting a  strikeout and a double-play ball, to lose out the win and ensure the Diamondbacks would not be swept, going home with a 4-5 record for the road-trip.

Worth noting: a Sunday afternoon game, and the division-leading Braves, riding a nine-game winning streak, could only pull in a crowd of 23.709 - that's more than 1,700 less than the average crowd at Chase Field this year. The other two games were better; Friday was a sell-out, though that was July 4th with a fireworks display attached. But, damn, today's crowd seems very low. 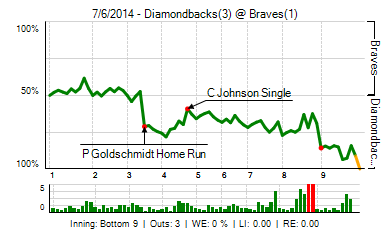 After a while where it looked like the GDT was going to be as empty as Turner Field, things perked up in the second half and we ended with a respectable 239. JoeCB1991 led the way, ahead of hotclaws and James Attwood, with other present being: 4 Corners Fan, AJV19, Clefo, Diamondhacks, GuruB, Hazzard21, Jim McLennan, Rockkstarr12, SebSwo, SongBird, Xipooo, benhat, cheese1213, ford.williams.10, freeland1787, onedotfive and xmet. Rockkstarr12 wins Comment of the Thread, for one of the truest philosophical statements I've ever seen on the 'Pit.

"I've learned that you shouldn't go through life with a catcher's mitt on both hands; you need to be able to throw something back." --Maya Angelou

The team returns to Chase Field, where they start a three-game series against the Marlins tomorrow night, with Chase Anderson pitching in the opener. And, don't forget, the All-Star Game selection show begins at 4pm Arizona time, so we'll see if Paul Goldschmidt is announced as the starting first-baseman. We'll have a thread going up for that in a bit.