...and sucked on national television too, so this wasn't even "if a tree falls in the forest" kind of suckage, where it's mostly people who already know how bad we are, that get to see it. Weren't sure why Arizona has the worst record in the majors? Have eight innings of demonstration.

Share All sharing options for: Diamondbacks 4, Braves 10: Well, that sucked.

In the first, it seemed like Fox Sports 1 had shown up for Body Swap Day at Turner Field, because you couldn't tell from events there, which team was on top of their division, and which possessed the worst record in the major leagues. Two errors there by Braves' defensive legend shortstop, Andrelton Simmons - who had averaged one every 122 innings coming into the game - helped Arizona to take a three-run lead, along with a successful challenge on the back end of a double-play. There were RBI hits for Paul Goldschmidt, Miguel Montero and Gerardo Parra, and Mike Bolsinger got to hit before he had to throw a pitch. If only the game ended there.

But the cracks started immediately, as it quickly became clear that Mike Bolsinger was not having a good day, as the Braves scored before they made an out, after a lead-off triple was followed by an RBI single and a balk. Bolsinger escaped that jam, but three more hits in the third inning scored another run for Atlanta, making it a one-run game. Meanwhile, after going through their whole line-up and making Aaron Harang throw 30 pitches in the first, the Diamondbacks offense returned to their usual form, our only base-runner the second time through being a Montero single, promptly erased by the inevitable Martin Prado double-play.

Then, in the bottom of the fourth, the wheels fell off. Mostly off Bolsinger, but questions have to be asked about Kirk Gibson as well. Back-to-back singles opened the frame, and a Harang bunt moved the runners over. The next batter saw B.J. Upton reach base, on an error by Didi Gregorius, with a run scoring. At least, that's what the scorebook will show. All the indications on replay, are that he was out - but for some inexplicable reason, the Diamondbacks didn't challenge the call, or even stall for time to see if there were grounds for a challenge. As a result, by the time the inning was over, Atlanta had scored five times, taking a 7-3 lead, never seriously threatened thereafter.

Bolsinger's afternoon didn't even last that long, being replaced by Randall Delgado for the final out. Even allowing for Gibson's apparent narcolepsy, our starter's line was unimpressive: 10 hits and two walks in 3.2 innings, resulting in seven runs, five earned, and with five strikeouts. All told, more batters reached base safely off Bolsinger than he retired, which is never a good thing. With Bolsinger's ERA now at 5.13, it seems he's the most likely candidate for a return to Reno, if Trevor Cahill's last outing in Reno is sustained, or when Bronson Arroyo is able to return, whichever happens first.

Things didn't exactly get better for the Diamondbacks thereafter. Indeed, about the only things to cheer out of this game as a whole were a) three hits for Montero, plus two and a walk for Parra, b) Ender Inciarte's first home-run in the major leagues [he only had a dozen over seven seasons in the minors, so this actually came quicker than I expected!], and c) Goldschmidt extending his on-base streak to 26 games, with his double in the first. That's now in the top 10 for a Diamondbacks hitter all-time, though still trails his own mark from late last season through mid-April, when Paul reached base in 31 straight. That was tied for fourth on the franchise list.

After Bolsinger's departure, Randall Delgado worked 1.1 hitless innings, but Matt Stites allowed a two-run homer to some guy called Justin Upton in the sixth - only one of those runs was earned, due to an error by Goldschmidt. Eury de la Rosa, called up to replace the traded Joe Thatcher, worked an unimpressive seventh and eighth, and was charged with a run, on three hits and a pair of walks. But perhaps the most exciting news of the day, Martin Prado extended his lead over Aaron Hill, hitting into two double-plays to Hill's one. Prado now has 14 on the season, and a remarkable dozen in his last 31 games, after having only two through May 30.

It's our fifth defeat in six games, and locks in another series loss for the Diamondbacks. We've only taken one set since we won two of three from the Braves at Chase Field on June 6-8; our record since then is 8-16, so it's clear that any reports of improvement for this team were clearly premature. We saw the first moves being made on the player front today; one wonders how much longer the powers-that-be will tolerate this level of performance, and the worst record in the majors, before heads start to roll in earnest. Hopefully, not much longer. 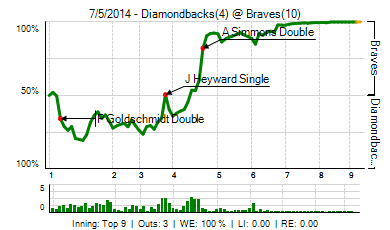 An originally optimistic and cheerful Gameday Thread... Didn't quite end that way. freeland1787 reached exactly three digits, ahead of JoeCB1991, with James Attwood some way back in third. Also taking part: Clefo, Diamondhacks, GuruB, Hazzard21, Jim McLennan, Makakilo, MrMrrbi, Rockkstarr12, SenSurround, asteroid, cheese1213, hotclaws, onedotfive, shoewizard and xmet. My comment in response to a statement that this was an ugly game was the only Sedona Red one, so we'll skip a Comment of the Thread here. This game really should be forgotten as quickly as possible.