6.2 innings from Miley and two-run homers by Didi Gregorius and Paul Goldschmidt proved just enough for the Diamondbacks to beat the Reds in Cincinnati, and take the series as well.

Dammit.jpg. While this game wasn't screened on Fox Sports Arizona, turns out it was, in fact, shown on the MLB Network, without any kind of regional blackout restriction. Unfortunately, I did not discover this little fact until the bottom of the ninth inning. It might have been nice if, I dunno, @dbacks had chosen to mention this at some point, as I sat here, "enjoying" the baseball experience on MLB Gameday. Grumblemuttergrumble. As if baseball with a first pitch of 9:35 am wasn't bad enough.

Still, the win's the thing, and a fairly solid outing from Wade Miley, proved necessary. For the bullpen, after their sterling work in the last three games, almost coughed it up, as Brad Ziegler, Eury de la Rosa and Addison Reed combined to allow four hits, two walks and four earned runs over the last two innings. It was the first time since before the All-Star break that Cincinnati had scored as many as four times in a game. Fortunately, the Diamondbacks offense did just a little bit better, to get a 3-3 split on this road-trip - and, incidentally, Kirk Gibson is now tied with Bob Melvin atop our managerial leaderboard, with 337 wins. Both men also have 340 losses.

Both starters were effective early on, Wade Miley and Alberto Simon trading zeroes through the first five, though Miley was almost permanently out of the stretch, the fifth being his first (and only) clean inning of the afternoon. The third was the wobbliest for Miley, and the Reds could well have scored, but for some bad base-running. The Cincinnati leadoff batter singled, but was fooled by Mark Trumbo in left, who cunningly faked the runner out, pretending to kick the ball around before sweeping the ball up and firing a strike to second for the out. [That's my story, and I'm sticking to it] After putting two more on, Tuffy Gosewisch then nabbed a runner trying to steal third, ending the inning.

Instead, things remained scoreless until the top of the sixth inning, when Paul Goldschmidt, clearly upset at seeing his season average dip below .300 (it was A Whole Thing in the GDT...), smacked an 0-1 pitch on a line over the fence in left-field for his 19th home-run of the season. That came after Aaron Hill had legged out an infield single, but also after a TOOTBLAN of our own, David Peralta's leadoff single being erased when he tried to steal second. However, Peralta redeemed himself with another leadoff hit in the eighth, this time a triple, and came home on Trumbo's sacrifice fly, to make it 3-0.

Miley had left the game by that point, being lifted with two outs and a man on second in the seventh inning, Evan Marshall coming in to tidy things up with a two-pitch appearance. Wade went 6.2 scoreless innings, scattering seven hits and four walks, with only the one strikeout. [The last out was the old 1-5-6-4-1-6-4 rundown, if you have that on your D-Bingo card] But after the struggles last time, it was a return to form, despite uncharacteristic wildness - the walks were one off his season high. At 99 pitches, it was perhaps something of a quick hook, but the bullpen got a breather last night, so I was okay with the move. Better a hitter too early than one too late, certainly.

Not that the rest of our relievers were exactly lights out today, however. Brad Ziegler lost the shutout in the eighth, giving up a run on two hits and a walk - it would probably have been two, except there was a double-play ball in the middle. But Arizona got that run back in the top of the ninth, and then some, as Didi Gregorius dispatched his fourth home-run of the season to right, after a Gerardo Parra walk, making the score 5-1 to the D-backs. Both men, along with Peralta, had two hits today, Parra and Peralta also getting a base on balls, while Goldschmidt had a walk took, keeping his average just above the .300 mark [like I said: it was A Thing...]

Those add-on runs turned out to be completely crucial in the ninth. No longer a save situation, Kirk Gibson opted to send in Eury de la Rosa instead, but he retired just one of the three batters faced, giving up a single and a walk. Okay, now it's a save situation: enter Addison Reed, who did get the next batter, before allowing the required Addison Reed home-run, a three-run blast which pulled the Reds back within one. He did preserve the win with a K for the third out, but it won't exactly have done his trade value any good, unless we can dazzle potential suitors with his shiny 26 saves. 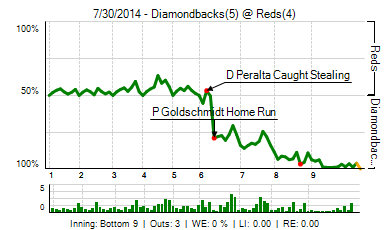 Surprisingly chunky GDT, given the day and the hour, with 667 comments in total. James Attwood just out-dueled DbacksSkins, with AzDbackfanInDc and GuruB in a tie for this spot. Also present were: Angry_Saguaro, Clefo, Jim McLennan, JoeCB1991, Makakilo, MrMrrbi, SenSurround, SongBird, cheese1213, freeland1787, frienetic, hotclaws, onedotfive, preston.salisbury and xmet. Songbird popped in late to steal Comment of the Thread for her thoughts on our closer:

That's why it's an EXPERIENCE and not just an appearance.

It's back to Phoenix for the Diamondbacks, who begin a ten-game home-stand tomorrow night, at the much more civilized hour of 6:40pm, in the first of four against the Pittsburgh Pirates. Jeff Locke will take on Josh Collmenter in that one. Now, with the Diamondbacks game over and it barely being lunchtime, what am I supposed to do for the rest of the day until Sharknado 2 is on?