Diamondbacks 10, Pirates 2: That was easy. Eventually...

As the Diamondbacks were being no-hit in the sixth inning, you could probably have got extremely long odds on this turning into our first blowout win in four weeks. But a seven-run ninth will tend to help most games.

Share All sharing options for: Diamondbacks 10, Pirates 2: That was easy. Eventually...

This was looking like a typical Diamondbacks loss in the early stages, a pitcher with a track record little better than average, being made to look like a Cy Young winner. The first 12 Arizona batters to come to the plate this evening in Pittsburgh all made outs, admittedly with some bad luck, particularly in the second, where we had three line-drives all going into cgloves. After five innings, we were still entirely hitless. Brandon McCarthy, for his part, had wobbled his way around a series of base-runners, but with the help of some well-time defense - a caught stealing here, a double-play ball there - had held the Pirates to two runs as we went into the sixth.

However, the way the D-backs were hitting, that seemed more than enough offense to secure a sweep for the home team, even after we got a call reversed to end the Pirates' fifth. Didi Gregorius walked to lead things off for us in the next half-inning, and I grumbled about Gibson leaving McCarthy in to hit for himself, especially after he couldn't get the bunt down on the first two attempts. Fortunately, he did on the third, and Ender Inciarte swatted a 2-1 pitch into left-center, allowing Didi to scurry home. The next hitter, David Peralta, cranked an offering into the right-field bleachers, and in just four pitches we had gone from two runs down and being no hit, to taking the lead.

Now holding a lead, McCarthy was gone before being able to get through the sixth inning, after a two-out walk, but Oliver Perez came in to get the third out and strand the runner. McCarthy's final line was eight hits and two walks over 5.2 innings, with six strikeouts and two runs allowed, finishing at an even 100 pitches. Evan Marshall struck out two of the three batters faced in the seventh, and Brad Ziegler worked around a single to follow suit with another zero in the eighth, as the Diamondbacks clung on to a one-run lead. We readied the antacid pills, because it looked like we knew where this was going.

Ziegler in for the 8th

You know what that means for the 9th…

and they let Peralta pitch for old times sake?

How we laughed, for there was no chance of the Diamondbacks ending the night in double-digits. Absolutely not going to happen. Impossible. After an Aaron Hill single, we were just pleased Martin Prado didn't hit into a double-play, instead putting men on the corners with no out. "Get one," I thought. "Give us some Reed-surance." And, lo, Cody Ross delivered. Then Gregorius delivered. Inciarte delivered, Peralta delivered. Goldschmidt delivered. And finally, Montero delivered. as the Diamondbacks sent eleven men to the plate, scoring seven times on eight hits. We didn't see Reed at all: Matt Stites closed things out instead.

It was pretty epic. The Diamondbacks got as many runs in the ninth as during the previous four games combined. They had more extra-base hits in their 11 PAs that inning, than they had from the end of Saturday's game in San Diego, all the way through up until Peralta's home-run - a span of 128 plate appearances. The sudden, unstoppable offense reminded me of a previous game against Pittsburgh, which I "watched" by frantically refreshing Mrs. SnakePit's phone, as we waited for a train at Edinburgh station in Scotland. Enciarte, Gregorius and Goldschmidt each got two hits, Goldie extending his on-base streak to 24 games, tied for 14th in team history.

Peralta finished the night with three hits, taking him up to 34 in his first 28 games in the major-leagues. That's a pretty good start to his career, though his walk-rate - just four in 109 PAs - is something that definitely needs to be improved. Here are the Diamondbacks with the most hits in their first 30 games, along with Peralta's numbers to this point; he could move up the list, depending on his performance over the next couple of days. It certainly will make things quite interesting, if Peralta can sustain this level of performance untill Mark Trumbo and, in particular, A.J. Pollock come back off the disabled list. 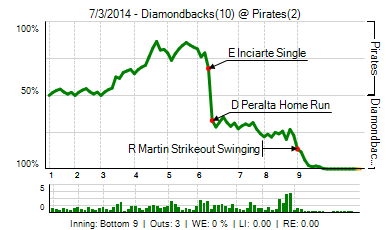 Needless to say, this ended up a rather happier GDT than it seemed through the early stages. SongBird led the way ahead of freeland1787 and JoeCB1991, with the others present being: 4 Corners Fan, AzDbackfanInDc, DeadmanG, GuruB, Jim McLennan, Makakilo, MrMrrbi, cheese1213, dbrowell, fsudude, hotclaws, onedotfive, piratedan7, porty99 and preston.salisbury. In a night with a few possible contenders, Joe picks up Comment of the Night, for a thoroughly successful jinxing of the no-hitter. We'll roll our Rallycat the next time we find ourselves in a similarly dire situation. It's on to Atlanta for three games against the Braves and [insert Justin Upton narrative here]. Josh Collmenter takes on Ervin Santana tomorrow, probably hurricanes permitting (I've not really been paying attention!). The win also moves the Diamondbacks back to within half a game of escaping the cellar in the NL West - only, now it's the Rockies who are in our sights, rather than the Padres...