The Buster Posey rule, introduced to limit collisions at the plate, turned around and potentially cost the D-backs this game.

Rule 7.13: Baseball announced -- effective this year -- that a runner "may not deviate from his direct pathway to the plate in order to initiate contact with the catcher." Similarly, catchers are not allowed to block the plate unless they are in possession of the ball. If the runner violates the protocol, he's out. If the catcher errs, the runner is safe.

With the game tied at 2 and with 2 outs in the bottom of the 6th inning, Ryan Howard walks. Marlon Byrd follows with a towering pop fly that Didi Gregorius manages to drop causing a running Ryan Howard to try for home. Ender Inciarte throws a bullet to Miggy who tags out Ryan Howard 2 feet in front of home plate. According to the Buster Posey rule, the Phillies thought Miggy was blocking the plate and challenged the play.

Upon review, the umpires determined a nailed "dead" Howard, who never touched home, is allowed to score. Evidently, Miggy needs to tag a "dead" runner 15 feet up the first base line. Gibby was not happy (lip reading) and many thought a Reno vs. Albuquerque fight might ensue instead; the D-backs lamely chose to sit on their hands. Ironically, this all happened while Tony LaRussa was accepting his induction to the Hall of Fame.

Nuno was oddly effective today; 6.2 IP, 3 H, 4 R, 2 ER, 3 BB, 5 K however, the kicker - the D-backs rewarded Nuno with 2 errors which caused 2 unearned runs and an offensive offense. Nuno allowed a first inning 2 run home-run to Ryan Howard but settled in for quality start. Nuno left after another D-backs error by Peralta (later changes to a triple by some friendly home-field scoring) allowed Will Nieves to score with 2 outs in the 6th

Inheriting a runner at 3rd base Matt Stites came in to close out the 7th and effectively got Jimmy Rollins to ground out. Delgado and his distracting Sedona Red socks followed Stites to pitch an impressive 8th by striking out the side. To start the 9th inning, Peralta continued his torrid hitting collecting his second hit of the day. Goldy struck out and then Miggy singled to put the tying runs on base. Prado followed with what Prado does best - hit in to a double play. 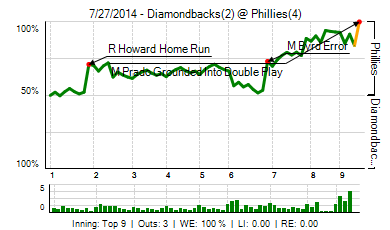 A light Gameday Thread - I think most of Arizona has other things to do on a Sunday morning, or maybe they were watching the HoF induction instead. Paulnh led the way, ahead of JoeCB1991 and GuruB, with the others present being: Alfred E. Neuman, Angry_Saguaro, Hazzard21, James Attwood, Jim McLennan, TucsonPete, Zavada's Moustache, catbat, freeland1787, hotclaws, onedotfive, preston.salisbury and xmet. ZM gets the comment of the day:

Wish the game could have started 30 minutes earlier

So that those of us in the Central time zone could watch Nuno at noon, yo.

"The thing is, I wouldn’t actually mind a two- or three-year rebuild. I can tolerate bad results, given a clear plan for the future and a sense things are moving in the right direction."
-Jim McLennan

It's now off to Cincinnati for three against the Reds. I trust MLB will review the ridiculous scenario which unfolded this afternoon, and make a swift change to a rule whose inadequacies were obviously demonstrated this afternoon.