Diamondbacks 5, Phillies 9: It's my Marte and I'll cry if I want to

Normally, a day when you get a pinch-hit grand-slam off the bench would be quite a good one. Not so here, at that was more a twitch of the death nerve than anything else.

Share All sharing options for: Diamondbacks 5, Phillies 9: It's my Marte and I'll cry if I want to

After the false dawn of the Cubs series, Tankapalooza is back in full effect, as the Diamondbacks have dropped three of their last four games, in particular conceding 20 runs over the last two contests. It's the second time since June 2012 we've allowed 9+ runs in consecutive games - the other such games were earlier this year, but that was at Coors Field, so there's that. The loss drops us back behind (or ahead of, depending on how you look at it) the Phillies in the overall standings, with the fifth-worst record in baseball. The Cubs are one game worse and the Astros one and a half worse. Not for long though, if we keep pitching like this.

We had loaded the bases with one out in the first, but came up empty, Mark Trumbo striking out and Martin Prado lining out. Wade Miley seemed to be taking a personal interest in Tankapalooza, wasting no time during a first inning in which he walked more people than in three of his four July starts combined. The three hits combined with a pair of walks to give the Phillies a two-run lead, and it could have been worse, as they left the bases loaded. It was less of an escape than a stay of execution, however, as the home team made it 3-0 their next time up (with a little help on defense from Trumbo and Aaron Hill), then extended the lead further with two more runs in the third.

Meanwhile, our offense was doing nothing. Gerardo Parra singled to lead off the second, but from there through the end of the fifth inning, we sent the minimum to the plate. The only other base-runner was Hill, who led off the third with an infield single, only to be caught stealing as Paul Goldschmidt struck out behind him.  With the Phillies extending their lead to 6-0 after five, courtesy of Arizona's second error of the day - this one belonging to Miley - the day looked very much over. And indeed it was for Miley, who gave up eight hits and three walks in his five innings, with six strikeouts, and five of the six runs being earned.

With a Hill double, a Miguel Montero walk and a Prado single, the Diamondbacks managed to load the bases with two outs in the sixth. A lefty reliever was brought in to face Parra, so he was pulled for a pinch-hitter, in the shape of Alfredo Marte. We weren't expecting much considering Marte had gone 6-for-24 with ten strikeouts this year. So, we were all "pleasantly surprised," to put it mildly, when he swatted the first home-run of his career, ten rows deep into the left-field bleachers. It was the fourth pinch-hit slam by a Diamondback, joining David Dellucci (2001-07-21), Tony Clark (2007-05-19) and Chad Tracy (2009-09-26), and came just after this prophetic comment

I bet Marte swings for the fences.

After a 1-2-3 sixth inning from Randall Delgado, things looked perky once more for Arizona in the seventh, as a pair of singles from David Peralta and Nick Evans, along with a magnificent 12-pitch walk by Goldschmidt loaded the bases with one out, putting the tying run in scoring position. However, Montero and Trumbo both struck out swinging. Trumbo had another awful day, going 0-for-4 with two strikeouts and leaving eight men on base. He's now 4-for-33 since coming back, with one walk, ten K's and no extra-base hits. That was about it, a Goldie RBI double scoring Tuffy Gosewisch with two outs in the ninth, as a token gesture.

For, meanwhile, the Phillies had done a good job of getting to Evan Marshall and Oliver Perez, who combined to be tagged for four hits, a walk and three runs in their two innings of work, much as on Wednesday afternoon, snuffing out any faint hopes of a Diamondbacks comeback. As there, hits and home-runs overall proved about equal - the Phillies edged us 13-12, with one home-run each - but they were better in the clutch. Hill had three hits, Goldie two hits and a walk, while Prado reached base twice, on a hit and a walk. 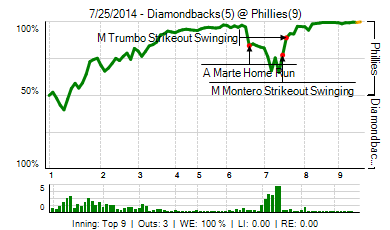 And, in case you're wondering, Marte's slam was worth a mere +8.5% of win probability. It's the least-significant slam by a Diamondback since July 3, 2012, when Jason Kubel got one off the Padres' Nick Vincent, when we were eight runs down. A brisk 472 comments, with JoeCB1991 ahead of Paulnh, and SongBird staving off the motion sickness long enough for third! Also present: AzDbackfanInDc, Clefo, Diamondhacks, GuruB, Jim McLennan, Majabe, MrMrrbi, PR151, , Zavada's Moustache, cheese1213, david.munter, freeland1787, hotclaws, onedotfive, piratedan7, preston.salisbury, shoewizard and xmet. Comment of the thread to hotclaws.

and for years one of the words I always had difficulty with was disappointing .Thanks to the Dbacks I can spell it perfectly now (true story)

We'll see if we can keep the opposition to...oh, I dunno, less than nine runs tomorrow. Josh Collmenter will take the mound for the D-backs, with Cliff Lee starting for the Phillies.