Diamondbacks 5, Tigers 11: If a pitching staff falls in the forest...

...and there's no-one around to see it, because the game isn't televised in Arizona, did it really happen? Unfortunately, the answer to that conundrum appears to be, "Yes."

Share All sharing options for: Diamondbacks 5, Tigers 11: If a pitching staff falls in the forest...

If you looked just at the bare offensive stats here, you'd think this game was a lot closer than it was. Both sides got 13 hits. Both sides had one home-run and three doubles. However, the Tigers got the big hits when they needed them, and also took advantage of mistakes when the Diamondbacks made them - in particular, by Trevor Cahill, Aaron Hill and Matt Stites. While credit is due for fighting back from seven runs down to, at one point, having the go-ahead run at the plate, the D-backs' hurlers conceded 11 runs at Chase for the first time in almost a year (July 27, 2013 against the Padres).

Trevor Cahill's second start was definitely not one to generate any sense of progressive improvement, although it started off well enough, with a crisp 1-2-3 first inning. The second inning, however, proved trickier, three consecutive hits with one out climaxing in a two-run double that got the Tigers on the board first. However, Cahill then settled down again, retiring five in a row to take us into the ugly fourth. Three singles opened that inning up and a sacrifice fly made it 3-0, but there was hope that would be it, as a ground-ball to Aaron Hill should have led to the second out, with the pitcher's spot up.

Instead, Hill booted it, but looked to have recovered in time just to throw the ball over to first, with the runner being called out. Not so fast, said the Tigers. Let's take a look at that again, please, Mr. Umpire. On further review, the call was rightly overturned, and instead of two out and men on second and third, there was one out with the bases loaded. Cahill did strike out the pitcher, but then the Detroit leadoff hitter ripped a ball to left field, where Mark Trumbo made a desperatem "all or nothing" dive for the ball. No prizes for guessing which of the two alternatives transpired (see pic above). Three runs trotted home, an RBI single followed and Detroit were 7-0 up after four.

That marked the end of Cahill's day, leaving with a line of eight hits and no walks in four innings, with three strikeouts and seven runs allowed, albeit only three of them earned. Still, it was an ugly line and according to those at the park, Cahill looked particularly uncomfortable out of the stretch - which might explain the good, clean innings, and also the tendency for things to snowball out of control. He now has an ERA of six in his two games since returning to the rotation, allowing 12 hits and two walks in nine innings, with six strikeouts. Small sample-size, sure; however, I suspect only Mrs. Cahill could detect any improvement overall.

Credit to the offense, admittedly. They could have phoned it in from there, with a seven-run deficit, but did manage to claw their way back, actually getting the go-ahead run to the plate with no outs in the seventh. Back-to-back doubles by Gerardo Parra and Martin Prado got us on the board in the fifth, and Didi Gregorius then connected for his third of the year to make it 7-3. A Parra single then scored Paul Goldschmidt in the sixth, and we led off the seventh with three singles of our own, making it 7-5, with two on and no outs. However, Aaron Hill flew out and Goldie hit into our third double-play of the afternoon (the others being by Prado and Miguel Montero; no surprises there, then).

Meanwhile, a surprisingly effective burst of long relief by Eury de la Rosa had kept the Diamondbacks in the game, as he worked three scoreless innings of one-hit ball, striking out four. Admittedly, he did also walk three, and ended the day with the bases loaded, striking out his final batter. Matt Stites took over for the eighth, and struck out the first two batters he faced. Unfortunately, it then took him five attempts to get that pesky third out, including an RBI single, followed by a three-run homer. With his ERA now up at 6.59, it may be a little too soon for the Matt Stites Experience to be taking over the closer's role.

There as no coming back for the Diamondbacks from there, and the game ended with us going down in order for the ninth inning. Parra nded the day with three hits, with two apiece for Goldschmidt, Prado and Gregorius; Hill reached base twice, on a hit and a walk. Trumbo was the only starting position player not to record a hit. He went 0-for-4 with a pair of K's, and is now 4-for-29 with one walk and no extra-base hits since coming back. The nine-game streak without an XBH is tied for the fourth-longest in his career. 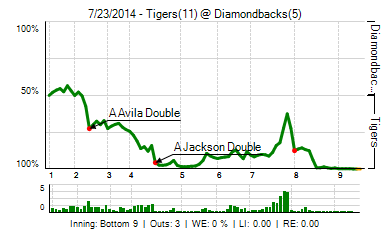 We have a day for our pitching staff to sit in the corner and think about what they've done, before the D-backs head on the road for three games against the Phillies and Reds. Yay, east-coast start times! That gets under way at 4:05 pm (AZ time) on Friday afternoon, when Wade Miley takes on Kyle Kendrick. We'll have plenty to talk about tomorrow though, so please do drop by.