The Week In Diamondback Tweets

Truncated edition here, what with the All-Star Game meaning a lot less Diamondbacks baseball to discuss since last Tuesday.

Share All sharing options for: The Week In Diamondback Tweets

The Home-run Derby in Diamondbacks Tweets

40,558 fans here at Target Field. An Ambien would have cost much less.

The All-Star Game in Diamondbacks Tweets

First pitch Goldy has seen on the inside part of the plate in 3 months. #Dbacks

Wainwright saying he grooved one (Trout and Miggy too?) is like the person who donates "anonymously", but tells it to everyone. 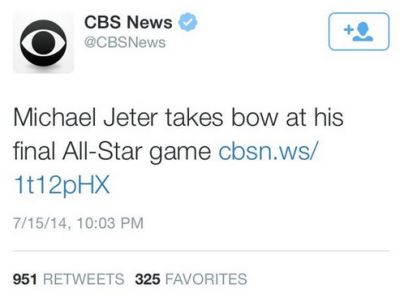 Ted Williams died the week before 2002 ASG and had MVP immediately named after him. MLB had a month and did nothing for Tony Gwynn.

The Games in Diamondback Tweets

Fan ran out to the field and literally broke the ankles of all the security guards. LOL #cubs #dbacks

I feel like they should have tried Trumbo at 3B, but you really can't win when it comes to Mark Trumbo defense.

Wasn't planning to drink a lot tonight but the way the @dbacks are playing....RIP TO MY LIVER. I gotta celebrate tonight. #ForGoldy

Dbacks promotions playing "Float or Sink" with a Boba Fett alarm clock. If it sinks, it will be slowly digested over 1,000 years.

Please don't call the cops. It's not domestic violence, it's just me screaming at my TV because it's baseball season and the @Dbacks are on.

#Tigers closer Nathan, on glut of Detroit fans at #Dbacks game: "It felt like more of a home game, except I didn't have as many boos."

This week, a Getting Used to New York edition.

This city has such great energy and so much to teach me. Heck, as I block a sidewalk to type this, I've already learned three new swears!

As someone who is currently apartment hunting in NYC, I'm not all that impressed by this episode of Naked & Afraid.

@CJNitkowski I just woke up from a nap and farted contentedly. Almost as glamorous as you described.