The D-backs offense struggled to solve Charlie Morton and the Pirates pitchers, dropping their third in a row. After winning his first five games, Chase Anderson has now lost his last four.

Anderson didn't have his best stuff tonight, and he only lasted 3.2 innings, scattering eight hits and three walks, taking 88 pitches to get that far. While he has received a total of six runs during his last four starts, his own ERA over that time is 5.03, and he has allowed 24 hits and ten walks in 19.2 innings, so you'd be hard pushed to call the 0-4 record particularly unlucky. Randall Delgado pitched well in relief, throwing 2.1 innings of one-hit ball, and striking out four. But after a scoreless inning from Joe Thatcher, Matt Stites gave up three hits and two runs in the ninth.

The offense was very quiet, with only an Aaron Hill bloop RBI single in the third inning to show for their efforts. Paul Goldschmidt was the sole bright spot, getting three hits and scoring our only run. David Peralta reached base twice on a hit and a walk, while Cody Ross and Roger Kieschnick wach came off the bench with a pinch-hit single. However, the team also made a trio of errors, by Gerardo Parra, Martin Prado and Didi Gregorius, and Prado also hit into his 12th double-play, taking over the team lead from Aaron Hill. 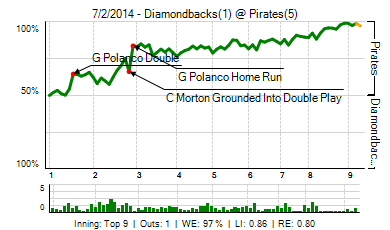 A solid turnout with over 600 comments, led by freeland1787, with DbacksSkins and JoeCB1991 filling out the podium. Also present: 4 Corners Fan, Angry_Saguaro, AzDbackfanInDc, Clefo, GODSCHMIDT, GuruB, James Attwood, Jim McLennan, Makakilo, MrMrrbi, Paulnh, SenSurround, SongBird, asteroid, hotclaws, onedotfive, piratedan7, preston.salisbury and xmet. Comment of the thread to onedotfive for their response to the suggestion Cody Ross might be ordered to hit McCutchen with his bat.

If that happened, McCutcheon would be the first thing Ross hit in a long time

Brandon McCarthy takes on Vance Worley tomorrow, with a 4:05pm first pitch, as the Diamondbacks try to avoid the sweep. Turambar will be along with the beercap a bit later.