Paul Goldschmidt and Miguel Montero combined for six of the nine runs batted in on Saturday to lead the D-backs to their second win in a row.

Share All sharing options for: Diamondbacks 9, Cubs 3: Winning at home

Wade Miley was excellent in his second half debut, throwing seven innings and staying away from the big inning. The D-backs lefty walked just one batter and struck out seven and kept his team in the game until the offense took off in the middle innings.

The Cubs got out to a hot start with three base runners in the first inning, and the first run of the game on an RBI single off the bat of Starlin Castro.

Arizona looked as though they were going to match that in the bottom half when they had the bases loaded with two outs and Martin Prado at the plate, but he flied out quietly to left.

In the bottom of the third, Paul Goldschmidt reached with a single, and later scored from first on some absolutely putrid defense on the part of Chicago. Miguel Montero singled to center, and Arismendy Alcantra couldn’t quite put a fork in the ball to pick it up. Goldy rounded third and realistically should’ve been thrown out at home, but the ball was off line and he was able to avoid the tag to tie the game up at one.

That score didn’t hold for too long though. Wellington Castillo stepped up to the plate in the fourth and sent a Wade Miley pitch over the wall to give the Cubs the lead once more. After a Junior Lake triple in the ensuing at bat, Mike Olt manufactured another run for Chicago with a sacrifice fly to right field to make the score 3-1.

In the bottom of the fifth, things changed. An Ender Inciarte double and two walks to Aaron Hill and Goldy loaded the bases up in a blink of an eye for the D-backs with Mark Trumbo due up. Trumbo got a tasty pitch to hit on a 2-0 count and did what he was supposed to with it, but the ball went directly to a waiting Anthony Rizzo to keep the bases loaded with one out. With Montero up, Travis Wood decided to leave a slider right over the heart of the plate, and Miggy lined it down the right field line to score all three guys, pushing the D-backs ahead. He later advanced to third, and scored on a bloop single from Cody Ross replacement Gerardo Parra.

Arizona was able to add two more in the sixth. A Goldy top-spin liner that was just out of the reach of Chris Coghlan for a single, scored Nick Ahmed and advanced Inciarte to third. Mark Trumbo then hit an infield single – because baseball is weird – that scored Inciarte to extend the lead to four runs.

Goldy added to the lead in the eighth with a towering home run to left for his second and third RBIs of the game. The combination of Evan Marshall and Oliver Perez pitched scoreless eighth and ninth innings to close it out and secure the series win. 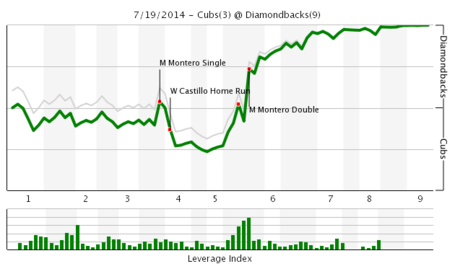 It’s been refreshing to see winning baseball at home for these last two days. Here’s to the next 40 home games, let’s hope for an above .500 second half. A GUY CAN WISH.

Josh Collmenter (7-5) takes on Jake Arrieta (5-1) in tomorrow’s contest as the D-backs go for the sweep.

Can't forget about the GDT: Congrats to 'Skins yet again.