The National League takes on the American League, in a rerun of the previous 84 games. If I was in the other leagues, I'd be getting a bit upset about this.

History would seem to favor the American League, because, going back to 1964, if you simply predicted "same winner as last year", you'd have been right more than three-quarters of the time (39 out of 50). Hopefully, it'll be a bit more offensive-minded than last year, although the Home Run derby yesterday didn't exactly seem like a good omen on that front. The three total runs scored in the 2013 version, was the lowest since the AL prevailed 2-0 in 1990. The American League manager for that one, was the man who is now the Diamondbacks' Chief Baseball Officer, Tony La Russa.

It will mark Derek Jeter's last All-Star Game, so don't be surprised if a) there's something special done to acknowledge this event, like they did in Cal Ripken's last ASG, and b) he wins MVP, even if he goes 0-for-4 with three strikeouts and boots a couple of groudballs. See Mariano Rivera last year: I haven't checked, but I suspect he is probably the only All-Star MVP to win for converting an eighth-inning hold opportunity. He was certainly the only pitcher since Pedro Martinez in 1999. So, I'd wager a small house on Jeter, even if the AL loses and Goldschmidt goes 4-for-4 with three home-runs.

Grant Brisbee had a good analysis of the rosters - the one which stood out to me was this one: 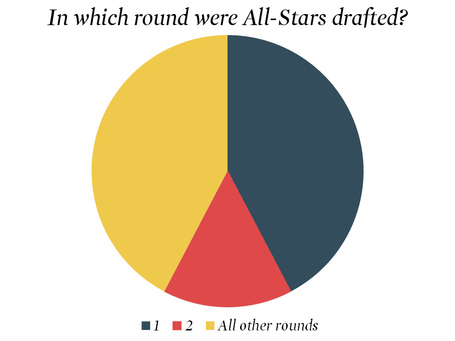 If you can tell from the lovely symmetricality of the above, this year, the number of All-Stars picked in the first round is the same as the number picked in all the rounds after the second combined. Goes to show: scouting prospects isn't an exact science, but it certainly isn't throwing darts at the map either. The latest pick is Mark Buerhle who was 38th-round selection, or as Grant puts it, "a pick after Shaun Skrehot, who is reading this right now because he googled his name. Hi, Shaun!" Skrehot was last seen playing two seasons in the Italian League, in 2007-08. Mark Buerhle... Not so much.

Of course, we'll be most interested to see how the Diamondbacks taking part do. Perhaps not just the obvious, current ones in Miguel Montero and Goldschmidt, but also those with a more tangential connection to the team, such as Ian Kinsler, Max Scherzer and Julio Teheran. However, this is more a relaxed celebration of baseball as a whole, and should be enjoyed as such. Fire up the barbecue, break open the apple pie and enjoy watching the best players the game has to offer, plying their skills. Because, regardless of what Bud may say, it really doesn't count that much.