The day after being kept scoreless by Tim Lincecum and the Giants, Wade Miley and the Diamondbacks did the same, four-hitting San Francisco for their third shutout of this season.

Through Wade Miley's first 17 starts, he had been far from the pitcher who deserved his spot in 2012 as runner-up in Rookie of the Year voting. He had a 4.78 ERA, was walking more people than any year since his debut in 2011, and was allowing home-runs at a clip: 17 in 105.1 innings. But since the calendar reached July, it's as if Miley turned the page with it. His three starts this month have been a whole new ballgame, literally. He has allowed three earned runs in 21.2 innings, without allowing a homer, and has a K:BB ratio in that time of 22:4. But for Addison Reed's Pittsburgh meltdown, he could well have won all three starts.Here's what Nick Piecoro wrote before that outing:

Miley plans to go back to the basics and refine a few things in the days leading up to his next start. He'll be focusing on how he approaches hitters the first time through the lineup and ways to get more shut-down innings. The latter have been hard to come by because he's been issuing too many walks and leaving too many pitches up in the strike zone. "That's something he's going to have to work on and we're going to practice on some things in between his starts and really focus on a good routine between starts," Gibson said. "He's looking for results."

Mission accomplished, it would appear., going by seven shutout innings this afternoon, holding San Francisco to four hits, all singles. They only had three at-bats with runners in scoring position all afternoon, and Miley stopped them there. With two outs and two on in the fourth, he got a swinging strikeout of Joaquin Arias, and then in the seventh inning, dug his way out of a deeper hole. With one out, he allowed a walk and a single. A groundball to Goldscmidt followed, with Paul flipping the ball to Miley who scurried over but was beaten to the bag by the runner, who was called safe, apparently loading the bases with one out for San Francisco.

However., Miley was righteously indignant about the call, claiming he had tagged the runner with the ball as both men headed for first. Our manager Gibson'd his way out of the dugout, and a challenge was issued - on further review, it was clear Wade had indeed made the play, and the call was reversed. There was still work to do, with the tying run on second and two outs, but he got more help from Goldie, who flashed his Gold Glove defense to snag a liner off the bat of pinch-hitter Hector Sanchez for the final out. That was it for Miley, who went seven innings, on four hits and three walks, with four K's.

The bullpen then took over the 2-0 lead, and... Well, it was surprisingly drama-free, as Brad Ziegler and Addison Reed retired all six batters they faced, keeping the tying run from getting any closer than the on-deck circle. The ninth inning by Reed was, for once, particularly pleasant and drama-free, as he took just nine pitches for a 1-2-3 ninth, and his 21st save. That tied his personal best for the quickest inning of the year, and was also his first "clean" appearance in more than two weeks, the last one coming June 27.

We should probably have scored a good deal more than two runs, given our nine hits, most of them going for extra bases. But the Diamondbacks weren't able to get the clutch hits when they needed them, going 1-for-11 with runners in scoring position. Six of those empty at-bats came over the last couple of innings, as leadoff doubles by David Peralta and Gerardo Parra were wasted. Aaron Hill scored both of our runs, getting us on the board with a one-out home-run in the fourth inning, his seventh of the year. He then doubled and came around to score in the seventh, on Parra's second hit of the day. Peralta also had a pair of hits for Arizona.

Paul Goldschmidt wasted no time in extending his on-base streak, doubling with two outs in the first inning, to reach base safely for the 32nd consecutive game. That's a personal best and is the longest by a Diamondback since Orlando Hudson had a 33-game streak in 2007, so Goldschmidt could tie that for third all-time, if he gets on base in tomorrow's rubber match. It'd also tie Paul with Y*s**l P**g for the second-longest streak in the NL this season; Carlos Gomez of the Brewers holds the top spot there, with 35 games. 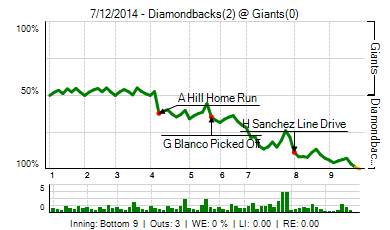 A pretty lightly-trafficked Gameday Thread, squeaking past 200 comments. People must have something better to do on a Saturday afternoon. Who'd have thought it? SenSurround, JoeCB1991 and GuruB all finished in the thirties, with the others popping in and out being: Arizona Eyebrows, AzDbackfanInDc, BulldogsNotZags, GODSCHMIDT, Jim McLennan, MrMrrbi, catbat, freeland1787, hotclaws, onedotfive, piratedan7, shoewizard and xmet. No comment received more than a couple of recs, so I am forced to withhold Comment of the Day for this one.

It's back to AT&T Park tomorrow, for another afternoon game, and the last contest before the All-Star. There has been a pitching change for the D-backs, with Chase Anderson, originally scheduled to start, being replaced by recent acquisition Vidal Nuño: it seems the team is looking to manage Chase's innings a bit.