Well, that wasn't quite what we hoped.

So he should be dismissed after one bad start?!?! Three quality starts in a row, but one bad game and he should be sent down?!?! I really thought you guys knew baseball, but I’ve changed my mind. Have a fun season! Cheers!!!

Yeah... About that... Bolsinger lasted five innings tonight, gave up eight hits - and wasn't getting BABIP'd to death - two walks and five runs, all earned, and his ERA increased to 5.50. I'm beginning to feel almost wistfully nostalgic for Trevor Cahill. Randall Delgado worked two ugly innings but somehow managed to post a pair of zeroes, and Eury de la Rosa worked a scoreless eighth. However, if was more than enough on a night when the unthinkable happened.

Yep. The apocalypse is surely upon us. For, though Goldie did get a walk, and also a ninth-inning single to extend his on-base streak to 31 games (tying his career-best and equal fourth in franchise history), he didn't homer. Then again, neither did anyone else, with the D-backs getting only five hits. Martin Prado also had a hit and a walk, and Mark Trumbo went 1-for-4 in his return from the DL.

Turambar will be along with the beer-cap shortly. Until then, here are your bells and whistles: 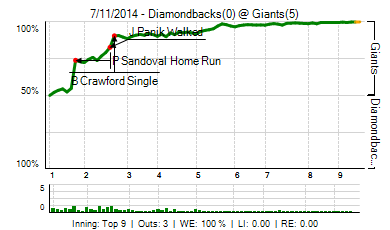 That was the cause of Arroyo’s UCL tear, not pitching, but rocking out to early 00s Staind songs or whatever it is he likes