Miguel Montero and Gerardo Parra showed up late in the game to secure Arizona's tenth win at home this season in walk-off fashion.

In a night where hits weren't all that tough to come by, runs sure seemed to be. Both Ervin Santana and Wade Miley were effective at dancing in and out of trouble all night. The Diamondback hitters were 0-12 with runners in scoring position up until the ninth inning, and finished the game 2-17 in that department. But what matters the most is the W. Aaron Hill, Miguel Montero and Gerardo Parra all delivered huge hits in the ninth, tenth and eleventh innings respectively to come from behind and win for the fourth time in five games.

The Diamondbacks struck first in the second. Martin Prado led the inning off with a single and David Peralta followed him up with one of his own, extending his consecutive games with a hit to start out his major league career at six. Two batters later, Ender Inciarte hit a grounder up the middle, which was botched by Andrelton Simmons, and then Dan Uggla threw it away to score Prado from third.

Atlanta came right back and tied the game up in the third when Simmons scored on a close play at the plate with the infield playing in.

The score stayed locked at one until the sixth when Evan Gattis lined a ball off the center field wall to score Justin Upton and give the Braves a one-run lead. Side note: Gattis is a scary dude.That’s one guy I wouldn’t want to piss off. Apparently, the D-back pitchers did something that rubbed him the wrong way because he was taking mean hacks at everything tonight.

Fast forward to the ninth inning with Craig Kimbrell on the mound. In my opinion, one of the keys of the game was the sequence of events that happened before the Hill double. Inciarte walked and then stole second base to be able to score once Hill did his thing. To go along with the RISP theme of the night, after Hill got his one-out double to score Inciarte, the D-backs couldn't push him across so the game went to extras.

Arizona charged right back with a home run from Miguel Montero after the Heyward blast to tie it up in the tenth. And finally in the eleventh, Gerardo Parra -- who up to that point was 0-5 -- stepped up and delivered the game-winning bloop single to score Cody Ross from second. 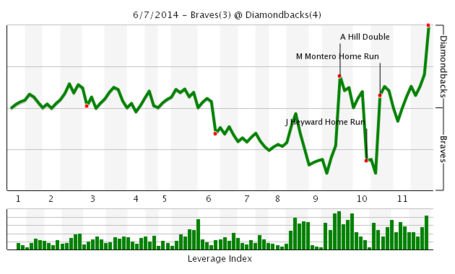 In the rubber match of the series tomorrow, our golden boy Chase Anderson sets off against Aaron Harang.