Diamondbacks 3, Padres 1: Out of the gutter

Josh Collmenter and the D-backs bullpen combined for nine innings of only one run baseball to raise the team out of fifth place and ahead of the Padres for fourth.

Share All sharing options for: Diamondbacks 3, Padres 1: Out of the gutter

In an era where the norm is a 90+ mph fastball, it was rare to see Josh Collmenter and Eric Stults toe the mound against each other, with both not being able to reach 90 the whole night. With that said, both starters couldn't get through the sixth inning, yet Collmenter had the upper hand on the night, keeping the mediocre Padres' offense out of sync with his fastball-changeup-curveball triad of pitches for his seventh win of the season. The D-backs bullpen combo of Matt Stites, Oliver Perez, Brad Ziegler and Addison Reed closed out the remaining 3 2/3 innings to lift Arizona out of fifth place and leap frog San Diego for fourth.

The Padres got out to a quick lead when they were able to capitalize with a runner in scoring position with a sacrifice fly to center from Tommy Medica.

Arizona was able to fire back with one of their own in the third. Ender Inciarte led the inning off with a single, and then advanced to third on a stolen base-error combo from Rene Rivera. Two batters later Martin Prado hit a sacrifice fly to right field to tie the game at one run apiece.

The game came to a head in the sixth with a two-run home run off the bat of Miguel Montero to give Arizona a two run lead. The Padres' inability to turn the double play turned out to be a godsend for the Diamondbacks, as Miggy was able to cash in his 45th and 46th RBIs of the season. Later in the inning, with a bean ball to Cody Ross’ bad hip, the soft-tossing Stults’ night was over.

Collmeter’s night didn’t last much longer either, as he was out of the game after the first out of the sixth, with two hits allowed in the inning. But then the hard throwing Stites came in and stuck out two out of the next three batters he faced to end the inning with no damage done.

After a scoreless seventh from Oliver Perez, Brad Ziegler came in and made the game a bit interesting, allowing two runners to reach. But he ended up striking out two batters and inducing an easy ground out to Aaron Hill to end the eighth.

Aside from the one-out triple from Didi Gregorious in the ninth, the Diamondbacks offense couldn't get anything going against the Padres bullpen. Luckily, they didn't need to.

Somehow, miraculously, Addison Reed recorded his second straight save with no runs allowed, and Arizona is in prime position to swipe one more position in the standings tomorrow win another win and a Rockies' loss. Mediocrity is so close we can taste it! 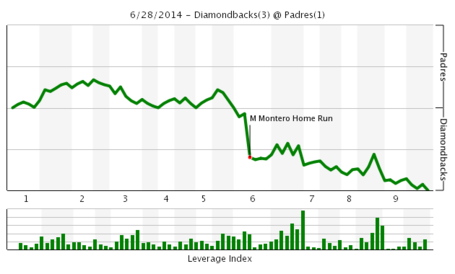 Mike Bolsinger is on the bump tomorrow, looking to complete the sweep in San Diego. He's up against Odrisamer Despaigne, which means "Cool beans" in Spanish. Just kidding, not really.

Here's the GDT, congrats to 'Skins yet again: