Diamondbacks 2, Padres 1: If only McCarthy could always face the Padres

McCarthy pitched seven dominant innings against the Padres, helping him secure his second win of the season.

Share All sharing options for: Diamondbacks 2, Padres 1: If only McCarthy could always face the Padres

If there was ever a time to feel good about the Diamondbacks winning when McCarthy starts, tonight would be the night. Why?

-Allowed no runs in seven innings last the last time he faced the Padres at Pecto.

-Petco is a pitcher's paradise.

The game started off slowly. A total of two combined hits we're tallied for both teams through three innings. The D'backs made noise in the fourth when Goldy started off the inning with a walk. Miguel Montero then followed it with a single. Aaron Hill struck out looking, but not before Ross allowed Goldy and Montero to both move into scoring position after a wild pitch. David Peralta then singled both of them home to give the D'backs a 2-0 lead. That was all McCarthy needed as he allowed one run on six hits in 7 innings.

The big moment of the game came in the bottom of the fifth.The first two runners reached off McCarthy to put runners on 2nd and 3rd with no outs. I'm pretty sure at this point all D'back fans knew it was time for McCarthy's big inning. Tyson Ross hit a sac fly to deep center to score Cameron Maybin, making it a 2-1 game. McCarthy then struck out Everth Caberera and got Seth Smith to fly-out to deep Left.

After the D'backs failed to do anything in the top half of the sixth, Chase Headley lead off the bottom half with a double. Here we go again! McCarthy can't even shut down the freaking Padres!

With Headley on 3rd base and one one out, Will Venable hit a sharp grounder to the drawn in defense. Hill came home with it, putting Headley in a rundown. After Prado tagged Headley, he threw down to second and put Venable in a rundown, which would end the sixth inning.

The D'backs could not do any damage off the Padres bullpen. Their biggest opportunity came in the eighth inning with runners on first and second, but Montero struck out swinging in 2013 fashion. But it didn't end up mattering because both Ziegler and Reed pitched perfect innings to seal the win for McCarthy. 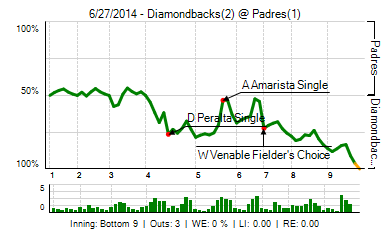 Almost 500 comments tonight, as we tiptoed around, waiting for the shoe to drop. It didn't, and we were all the happier for it. DbacksSkins led the commenters - this is my surprised face - ahead of James Attwood and SongBird. Also taking part tonight were: Angry_Saguaro, AzRattler, BrokeNBattleX, Clefo, GuruB, Jim McLennan, JoeCB1991, PR151, Paulnh, Rockkstarr12, Turambar, freeland1787, hotclaws, luckycc, preston.salisbury, rd33, shoewizard, soco and txzona. luckycc took him Comment of the Night honors for this pink 'un (which looks green here, but trust me, is pink in its natural environment).:

I have a Prado bobblehead

And the position he’s holding the bat in makes it llook EXACTLY like he’s just hit into a double play. Not even BobblePrado is immunbe./

"You're suffering under an enormous weight. We provide leverage."

It's back at Petco tomorrow night, as Josh Collmenter takes on Eric Stults. If we win that one too, we'll be tied for the Padres in fourth place.