It only took about half as long as last night's game. But shorter isn't necessarily better

What threatened to be a test of endurance for our pitching staff, turned into more of a test of endurance for the fans. After receiving 45 runs of support in his first five starts, going 5-0, Chase Anderson has received a total of five over his past three, losing each time. Not that he was exactly awesome tonight, with the usual problem of the long ball plaguing our starter. He lasted only five innings, giving up four runs, including two long balls, on seven hits and three walks, with four strikeouts. Newly called-up Zeke Spruill mopped things up the rest of the way, saving the bullpen with four innings of two-run ball, on three hits and a walk, also with four K's.

The problem tonight was a near total lack of offense, with Cleveland starter Corey Kluber shutting out Arizona for seven innings, on only four hits and a walk. The shutout continued into the ninth, before Miguel Montero took advantage of a couple of walks, driving in our first and only run with an RBI single. But Aaron Hill struck out swinging to end the game. Ender Inciarte had two hits and a walk out of the leadoff spot, and seems to be doing well there, but it definitely felt like our hitters were tired out after last night's marathon.

Off-day tomorrow, then we hit the road, starting off with the Padres. Turambar and edbigghead will be along with the beercap imminently, but here's the Fangraph and rollcall: 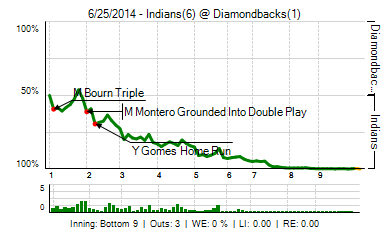 DbacksSkins crushed all comers, posting more than twice as many as anyone else, with James Attwood and JoeCB1991 vying for second a third. Not that many people watching this one. Those present were: 4 Corners Fan, Clefo, DeadmanG, Diamondhacks, EzioExManAZ, GuruB, Jim McLennan, Makakilo, PyroKinesis, SongBird, hotclaws, onedotfive, preston.salisbury, rd33, soco and txzona. No comment received more than two recs, so I'm going to follow in the footsteps our hitters and can't be bothered.