Tonight marks the half-way point in proceedings for the 2014 season. Half-way gone, or half-way there, depending on how you prefer to look at things.

Share All sharing options for: Game #81: Diamondbacks vs. Indians

Since Fangraphs gave up and went to bed before the recap last night, just to polish that off, here's the wild roller-coaster which was that game. 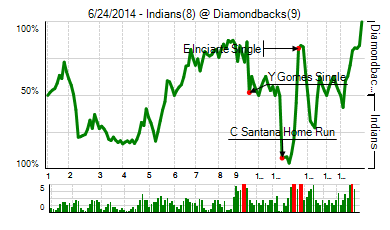 Have we ever had nine people with more than +10% in the same game before? Thinking that has to be something of a record. I've found games with more pitchers, and games with more hitters, but I wasn't able to locate one where there were more in total. The significance for tonight is obvious: ten innings and 152 pitches thrown by our bullpen. The Indians are even worse off; they may only have thrown 9.1 innings, but that took them 187 pitches. At least the schedule is somewhat kind, with an off-day tomorrow, and the team also had an off-day on Monday. Let's see who we might have available in our bullpen, based on who worked Sunday and Tuesday:

Ouch. Ziegler? Marshall? Then it gets thin, as you're talking about people who either threw 25+ pitches last night or will be working three days out of four, which you'd rather avoid. This might be one of those days where we just have to leave Chase Anderson out there, regardless of results, hoping he suck it up and get through seven innings, almost regardless of the results. As noted, the Indians are probably worse off, but the difference is Anderson has gone past six on only one occasion in the majors, while Kluber has reached seven in half of all his starts this year, so odds are he'll be going deeper tonight. Should make for interesting management, to be sure.

The above is, of course, pending any roster moves that may occur. There have been rumblings concerning such possibly taking place, but at time of writing (2:30pm), I haven't heard the specifics. If those occur, I'm sure there'll be a separate post about them in due course.