It was Bark at the Park in Chase Field today, and fittingly, our offense had all the venom of a sedated teacup Chihuahua, spending the first eight innings in particular, trudging sadly back to the dugout like naughty puppies.

Glad that's over. There endeth Hell Week at Chase Field, as Arizona faced the leaders of both the NL West and NL Central in successive series. It finished both with the dogs going to the Diamondbacks, on Bark at the Park day, and the Diamondbacks going to the dogs, as we dropped our second consecutive home series, and falling 15 games below .500 for the first time this season. But we can't blame starter Mike Bolsinger, who had one of the best starts of his young career this afternoon, working into the eighth inning for the first time. Unfortunately, it came on a day when the Giants' Madison Bumgarner was even more dominating.

Both pitchers were dominating early on, trading zeroes over the front four innings, with barely a base-runner. Arizona got the first hit, Cody Ross's an infield single, which could well have been an out except for a Giants' bobble. San Francisco got a one-out single of their own in the fourth, but a strike 'em out, throw 'em out double play ended the threat - particularly, impressive, it was on an 81 mph curveball. Is it just me, or does Miguel Montero seem to have become better at throwing baserunners out of late? He now has his CS% up to 25%, which is very close to league average. Checking, since June 10, we have nailed 6 of 10 attempts, so we are improving.

But double-plays giveth and double-plays taketh away. In the bottom of the fourth, Paul Goldschmidt worked a one-out walk, but was unluckily erased when Aaron Hill lined into a double-play, right back to the pitcher. What could have been a first-and-third, with one out, was actually the end of the inning. And the Giants seemed to take full advantage of the momentum shift. With one out in the fifth and a runner on first, the ball was shot into the gap in left-center, past the despairing dive of Ender Inciarte - seem to have written that before. The runner scored, though the batter was out at third, giving the Giants a 1-0 lead.

The longer the game went on, the more that seemed like an insurmountable obstacle. The D-backs went down in order against Bumgarner in the fifth, sixth and eighth, with a one-out walk to Goldschmidt in the seventh the only time he had to pitch out of the stretch. Never mind not getting hits with runners in scoring position, through eight innings, Arizona hadn't even had a plate-appearance with a runner in scoring position. Bolsinger was almost as good, stopping San Francisco from adding to their tally until he was lifted with two outs in the eighth and a runner on second. His final line was 7.2 innings, one run allowed on five hits and a walk, with four strikeouts.

Oliver Perez came on to tidy up, and a ground-out ended the inning. I've been pleasantly impressed with Perez, who had held batters to a .643 average coming into today. Unfortunately, his left-handed bullpen colleague, Joe Thatcher, didn't fair so well in the ninth, and nor did Evan Marshall, who started off with a single and RBI double, before being lifted without recording an out. Thatcher allowed the inherited runner to score, and one of his own, before Matt Stites got a one-pitch third out. After a 1.23 ERA through his first 14.2 innings, it seems the league is perhaps adjusting to Marshall. His line over the seven games since is an undeniably ugly one: 4.2 IP, 10 H, 7 ER, 2 BB, 4 K.

The resulting four-run deficit proved too much to overcome, though the Diamondbacks did at least get on the board in the ninth. Jordan Pacheco got a pinch-hit reached on error(!), and Ender Inciarte then produced only our second hit of the game. That was the end of Bumgarner, with the Giants turning to closer Sergio Romo, Martin Prado ended the shutout with an RBI single, bringing Goldschmidt to the plate as the tying run. However, he instead moved the tying run back to the on-deck circle, hitting into a double-play, and Aaron Hill's strikeout ended the game, giving it and the series victory to the Giants. 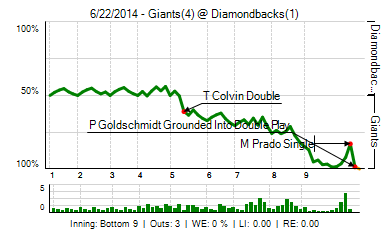 Combining the GDT and the recap/World Cup thread, we did cross 400 comments, though a good number of those were more concerned with USA vs. Portugal rather than the game. Still, we'll count 'em all. Leading the way was hotclaws, just beating out JoeCB1991 and AzDbackfanInDc. Also present, for one or the other: AzRattler, Clefo, Diamondhacks, GuruB, Jim McLennan, Majabe, Makakilo, MrMrrbi, Muu, PR151, Rockkstarr12, SenSurround, SongBird, benhat, blank_38, ford.williams.10, fsudude, imstillhungry95, onedotfive, preston.salisbury, shoewizard and txzona. Most rec'd comment was AzDback's one about hating soccer, but I'm red-carding that and going with:

just isn’t showing any seoul in this game right now.

There's an off-day for the Diamondbacks tomorrow, their first in three weeks, so I'm sure it'll be very welcome. We then get the Indians coming to town for two, starting on Tuesday night. Be nice not to be playing a division leader this week...