It's safe to say it's decision time for the Diamondbacks in regards to Brandon McCarthy after yet another poor pitching performance that resulted in a loss at home.

Share All sharing options for: Diamondbacks 4, Giants 6: Time for change

It was just your typical Brandon McCarthy 2014 outing, well kind of. The D-backs right hander normally cruises through the first two innings and finds trouble a little later on, but that wasn't the case tonight. McCarthy recorded the first out just fine, and then the game erupted in his face from that point. He's now 1-10 on the year, and with the loss the D-backs are 14 games back of first place, so it wouldn't be surprising to see yet another roster move.

Hunter Pence got the "snowball" rolling with a base hit up the middle, and both Buster Posey and Pablo Sandoval followed that up with singles of their own, the latter scoring Pence. Tyler Colvin then poked a single through the hole between short and third to score two more. And just like that, Giants starter Ryan Vogelsong had a three-run cushion to work with before he even took the mound.

After a quiet bottom of the first for the D-backs, the Giants were able to add another in the top of the second on another RBI single off the bat of Sandoval; this time coming on a two-out rally.

But it was just a matter of time for Arizona to pounce on Vogelsong, considering the track record of some of the guys in the lineup, one being Aaron Hill. Hill continued his dominance of the veteran Giants pitcher with a double to right to start off the bottom of the second. Miguel Montero then promptly doubled down the left field line to score Hill and two batters later, David Peralta hit a double of his own to cut the deficit down to just two runs.

McCarthy had his only 1-2-3 inning in the third, and struggled to keep the Giants scoreless in the fourth, something he couldn't do in the fifth. Brandon Crawford started the inning off with a triple to the left center gap and was pushed across with a quality groundout from Tyler Colvin for his third RBI on the night, extending the lead to three.

The Arizona offense wouldn't go away quietly, however. With the bases loaded in the bottom of the fifth, Hill drove the ball away from the semi-shift to the right side and knocked in two with a single to pull the D-backs within one. Though the inning ended on the same play when Hill was caught trying to advance to second on the throw to home.

In the next half, Hunter Pence absolutely killed a ball that went all the way to the second deck in left field off that guy who was included in the Justin Upton deal. Giants up two.

Aaron Hill had another chance with the bases loaded in the seventh against Jean Machi, but he couldn’t get it done this time. In one inning, he delivers runs, the next he pops out in foul territory and the D-backs went away quietly. And it was much of the same in the ninth as Arizona was able to get two runners on for Paul Goldschmidt to be the hero, but he lined out to right to end the game. 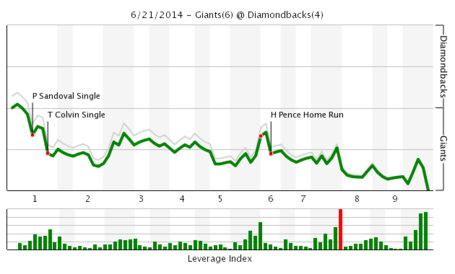 The Giants snapped their six-game losing streak and stay four games ahead of the Dodgers for first place in the NL West. The rubber match of the series tomorrow starts at 1:10 and we'll see Mike Bolsinger up against Madison Bumgarner.