Share All sharing options for: Diamondbacks 4, Brewers 3: Peace breaks out

If anyone tuned in expecting carnage, they'd be extremely disappointed. No-one got hit, and the nearest to an incident was Miguel Montero getting tangled with a Brewers infielder as he tried to break up a double-play [hit into by Martin Prado, natch]. The pic is on top of the quick recap, but it wasn't as Tony Jaa-esque as it seems, and Miggy seemed more bemused than anything. Otherwise, this was just another of 162 games, and to be honest, it's probably for the best. Not that this stopped Ryan Braun from his usual welcome, though hearts were in mouths when he send one to the deepest part of the park in the top of the first, before it died in Tony Campana's glove.

The Diamondbacks made the most of some poor Brewers defense in their half. Gerardo Parra roped one down the line, that bounced along long enough for him to reach third. Chris Owings then bounced one off Mark Reynolds' glove at first, for an infield RBI single, and the visitors then took a pair of tailor-made double-play balls, and turned them into a fielder's choice and a reached on error. Paul Goldschmidt then alertly took third base on a ball that didn't get all that far from the Brewers' catcher, and came home as Aaron Hill legged out his grounder to avoid a double-play, making the score 2-0 to Arizona after one.

The errors were infectious, as Miguel Montero clanked a foul pop-up to open the second - the batter then walked on four straight pitches, and it looked like that might hurt us, as the next Brewer singled to center. However, Miley coaxed a ground-ball to Hill, who recovered after almost doing the splits - described by Bob Brenly as looking like a giraffe bending down for a drink! - to start the double-play, and Miley got the first of his eight strikeouts to end the inning. As Songbird pointed out in the Gameday Thread, Miley is now sixth in the NL for strikeouts this year, with 93, between Adam Wainwright and Zack Greinke.

Wade did walk four batters tonight, but the good thing is, he was generally missing low, which is the kind of mistake where you will at least get the ball back. He struck out the side in the third, but his old nemesis, the home-run ball, came back to bite him in the fourth. Worse still, it came one out after consecutive singles that opened the frame. It was by no means a bad pitch, again down in the zone, and barely a strike, but Khris Davis golfed it just far enough to go into the pool area for a three-run shot. I note the roof was open, and wonder if it might have been a harmless fly ball with the roof closed.

His 17 home-runs allowed puts Miley second in the majors, behind the Brewers' Marco Estrada, so between that and his strikeouts, it seems he's not a fan of balls in play! He settled down after the long-ball, retiring 13 of the next 13 batters faced, until apparently tiring in the eighth inning, just not being able to get the third out. His night ended with back-to-back walks, and a final line of 7.2 innings pitched, three runs allowed on five hits and four walks, with those eight strikeouts. It was another no-decision for Wade, and he now has one victory over his last 13 starts, but this was a solid outing.

Meanwhile, Matt Garza had settled down after his wobbly start, and the Diamondbacks weren't able to do much more. We did make it 3-0 on Chris Owings' lead-off triple and Goldschmidt's RBI single in the third, but Garza then faced the minimum from there through one out in the eighth. Our only base runner was a Montero single to lead off the sixth, but it seems even putting Hill between him and Prado isn't enough to prevent the latter from hitting into another double-play, as mentioned above. With one out in the eighth, Owings double, leaving him a homer short of the cycle, but Goldie grounded out and, after a pitching change, Montero K'd.

Brad Ziegler came in out of the bullpen for the Diamondbacks, and retired all four batters faced, three by strikeout, stranding the two he inherited from Miley in the eighth. In the 9th, Martin Prado sent the ball to the gap in left-center for a one-out double, but David Peralta grounded out weakly on the first pitch. That brought up Tony Campana with two outs, hitting a bland, vanilla .136 for the season to that point. I braced myself ready for extra innings, and I wasn't the only one: In the spirit of reconciliation that filled the ballpark this evening, I won't award it Comment of the Night. But I did consider it...

And we are relying on Campana to win the game

This is why we are in last place, right?

Of course, YCPB, and Campana squeezed the ball past the despairing grab of the Brewers' second baseman, for the first walk-off hit of his career. 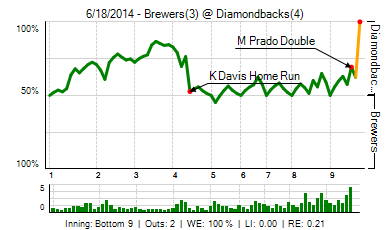 A calm, restrained and F-bomb free Gameday Thread tonight. So that's nice. DbacksSkins came out on top, ahead of TolkienBard and JoeCB1991. Also present: AJV19, BrokeNBattleX, DeadmanG, Edwong81, GuruB, Jim McLennan, Majabe, Makakilo, MrMrrbi, Noah Jarosh, SongBird, Zavada's Moustache, ford.williams.10, hotclaws, onedotfive, preston.salisbury and txzona. Comment of the night goes to Preston, for his response to a suggestion the Brewers' defense was due to their sampling of their namesake's product.

I think they’d have to wear Depends before they’d get sloshed enough to be this bad, given the intercourse in a canoe aspect of American macrobreweries.

Ah, no opportunity to poke fun at mainstream American beer, left unrewarded. Despite the W, we still remain at the bottom of the NL West, as the Padres somehow managed to beat the Mariners in a Felix Hernandez start. Still, it was Tony Gwynn Tribute Night, so we'll give them this one. We're back at it tomorrow for the series finale: bear in mind it's an afternoon game, without TV coverage. Yovani Gallardo goes up against Chase Anderson, with a first pitch at 12:40pm.