The Diamondbacks had a good old fashioned 2009 vintage bullpen meltdown to ruin a perfectly good start by Brandon McCarthy.

Boy, America, eh? If you were around earlier today you were probably aware of the United States National Team's late heroics against Ghana in the World Cup. It was pretty inspiring. Bet you thought the Diamondbacks would get amped up from this display of AMERICA EFF YEAH. Unfortunately, for reasons I haven't quite figured out yet, Milwaukee is also a city in America, so the same effects would apply to them as well. Who knew? Brandon McCarthy and Wily Peralta, tonight's starting pitchers, certainly did not at the time. Or maybe they did. I dunno.

This may be the most awkward metaphor to opening a recap in Snakepit history since soco used sections from the Uniform Commercial Code to draw comparison to some heinous game against the Giants in 2010*. In any case, this was game one of four against the Brewers at home, but it did not go the Diamondbacks' way. Read on to find out why.

The Brewers took the lead first in the second on a hard hit ball by Khris Davis that reached the wall. Fine, that's a thing. However, David Peralta had more than a little difficulty fielding the ball. It was like some sort of performance art, but the kind that allowed a clearly hobbled Aramis Ramirez to score from first base and allowed Davis to reach third base. Davis himself scored on a 3-6-3 Double Play later in the inning to make it 2-0 Brewers.

David Peralta and Chris Owings lead off with singles to start the bottom of that same inning. Then the recently promoted Roger Kieschnick also got a single himself up the middle! It scored Peralta to make the score 2-1! It was Kieschnick's first hit of the season and his first RBI as well. He took second on the throw and this became important as McCarthy did himself a favor by knocking in his second and third RBIs of the season to make it 3-2 D'Backs.

McCarthy did himself no favors, in a twist, by giving up a leadoff Home Run to Scooter Gennett. I mean, a grown man who goes by "Scooter" come on! I have a philosophy in life to never trust people who go by means of transportation or names of Muppets and Scooter Gennett overlaps that Venn 100%.

To Brandon's credit, he settled down the rest of his outing and did not allow another run after that. His final line for the night was 7 IP, 7 H, 3 ER, 1 BB, 2 K.

Joe Thatcher came in the top of the eighth and got two fairly quick outs. With Ryan Braun coming up, Gibby did the apparently sensible thing and lifted the LOOGY for Will Harris to face the righty. Hindsight being what it is, that was the wrong decision. Harris walked Braun and Jonathan Lucroy (Who seemed to take what looked to be a strike all game with Braun stealing and getting thrown out but lolz it was Ball 4) to bring up Aramis Ramirez, who doubled down the line to score the two walkees. Khris Davis singled off the glove of a jumping Chris Owings which allowed Ramirez to score to make it 6-3.

The ninth was much like the eighth. J.J. Putz came in and got two pretty quick outs. Then Elian Hererra doubled, Martin Maldanado flopped his way into a Hit-By-Pitch. With grown-ass-man named Scooter up, Hererra tried to steal third with two outs, and was called safe, however replay clearly showed that Prado tagged him with Hererra's right leg above the base while sliding, rather than on it. 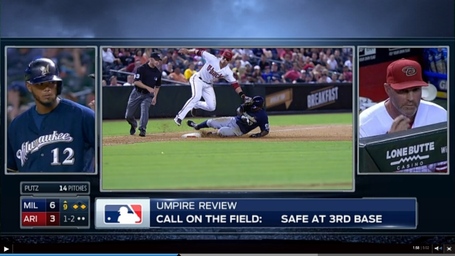 The Umpires reviewed this and disagreed, and Kirk Gibson argued and got tossed. This was significant as the Brewers scored three more runs thanks to Scooter and Ryan Braun to make it 9-3 by the time the inning ended.


The Diamondbacks did not much of consequence in the ninth and lose once again.

Rejoice, as I have decided to give a rare COTN

if given the chance

I wouldnt whisper to KT. I’d yell at him like the disgruntled fan I am

But also will h/t to GuruB for posting this tweet and he can share co-COTN with the Diamondbacks themselves:

Chase Field observes a moment of silence in remembrance of Tony Gwynn. pic.twitter.com/tfyAbCRxgz

These two teams will do this same thing tomorrow... So yeah. That's fun.