When things are going bad, they really go bad for the D-backs. Dan Haren had a bases clearing double, that's all you need to know about this game.

Nobody likes a sore loser, but man, this 13 games under .500 business just isn't fun. When the most important storyline of the season is how many All Star votes our first baseman is behind the next guy, you know the season can't be going all that well. Tonight was no different. Paul Goldschmidt did his thing as usual, but Josh Collmenter didn't hold up his end of the bargain and Arizona dropped their fourth straight game.

Didi Gregorious -- who's been excellent in the leadoff spot since he was called up a couple of weeks ago -- led the game off with a double. Two batters later, the "should-be starting first baseman in the All Star game" hit a home run to left to push the D-backs out to a 2-0 lead. Dan Haren left a cutter hanging over the heart of the plate, and Goldy did exactly what he's done the whole year, lacing it about 25 rows up the left field bleachers for his 49th and 50th RBIs of the year.

Collmenter cruised through the first two innings, but ran into trouble in the next two.

In the third, Dee Gordon, the smallest guy on the field hits, turned on a high and inside fastball and just got it over the short fence in right field. And for some strange reason, Gordon's Dodger teammates danced obnoxiously as he was rounding the bases until he got into the dugout. That's just LA being LA, I guess.

Moving ahead, Haren had retired nine in a row since the Goldy home run, but then Miguel Montero was the beneficiary of the scorer ruling an Adrian Gonzalez error a hit. Both Aaron Hill and Martin Prado followed that up with singles of their own, with Prado’s scoring Montero from second to regain the lead.

As has been the case so often this year, the Dodgers answered the bell right away just one inning after.

Yasiel Puig started the inning off with a walk, Adrian Gonzalez singled to left, and Matt Kemp singled home the walked Puig. Eithier then stepped up and hit another shot down the first base line, but once again Paul Goldschmidt showed that he’s extremely valuable in the field as well, nabbing the hard ground ball with a diving stop and tossing it to Collmenter in time to get him out. He saved at least one run with that play, but alas, Dan Haren hit a bases clearing double to give the Dodgers a three run lead. Just like that, the game felt out of reach.

The only damage done after the fourth inning was a Martin Prado solo shot in the ninth off of Kenley Jansen to pull the Diamondbacks within two. Jansen retired the next three hitters to finish us off, and win the series for LA. 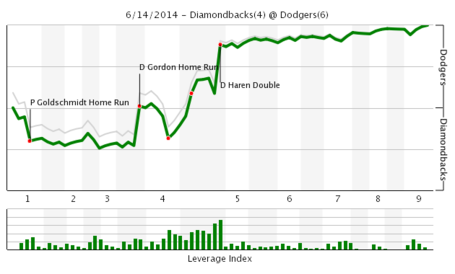 The game tomorrow starts at 1:10 with Bronson Arroyo taking on Josh Beckett.