Safe to say, Kershaw-Anderson v2.0 was one of those sequels that suck. Less The Godfather II, and more like Jaws: The Revenge. Well, it wasn't that bad, but there would be no sixth consecutive win for Chase Anderson this evening.

Initially, there was hope that this could be a repeat of the earlier encounter between Clayton Kershaw and Chase Anderson, Gerardo Parra and Paul Goldschmidt both singling with one out in the first inning. However, Aaron Hill took strike three, and Martin Prado grounded out. No matter: it took us until the second inning last time, before we tore Kershaw apart, so we can easily wait a few minutes. In the meantime, Anderson started well, going 1-2-3 and finishing off the bottom of the first with a heartwarming K of the Puig.

There was a meltdown in the second inning. The bad news is, it emphatically wasn't Kershaw, who struck out the side looking, around a Tuffy Gosewisch single. Anderson, however, started walk, two-run homer, hit batter, walk, and required 31 pitches to record the first out. Given that, before he reached that point, Los Angeles had two runs in and two more occupying bases, recovering without further damage was actually a pretty good effort, and Anderson settled down a bit after that. However, his economy continued to be problematic - definitely not what we needed after an extra-inning finale in Houston - taking a career-high tying 100 pitches to get through five innings.

Still, apart from that, it wasn't a bad effort. Anderson did seem to have some struggles with his control, walking four batters in five innings, and only 56 of the 100 pitches were strikes. But it didn't seem that he was getting much help from the home-plate umpire, and when the final result is still two runs over five innings, against the most expensive roster in the majors, I'll settle for that. However, we could certainly do with Anderson sticking around in games a bit longer: his six starts have occupied a total of only 33.2 innings, and that leaves a bit too much work for the bullpen to handle every fifth day.

Meanwhile, Kershaw was being the Kershaw who had won the Cy Young two out of the last three years, and come runner up on the third occasion. Seems he's a totally different beast when we see him in Dodger Stadium, rather than at Chase Field where, in nine starts, he is 3-6 with a 4.10 ERA. This was his 100th start in Chavez Ravine, and his ERA there was 2.24 coming into this evening's contest. The Diamondbacks did manage to get on the board and pull within one, when Aaron Hill drove in Chris Owings, each man doubling: the most remarkable thing was Arizona getting a leadoff double that. for once, wasn't stranded.

Otherwise, however, there wasn't much to speak of against Kershaw. He did scatter eight hits over seven innings - hell, even Gosewisch got a pair of hits off him. But, as per standard practice in the Diamondbacks Manual of Operations for the season, we weren't very good with runners in scoring position. going 1-for-7 off Kershaw. When Will Harris came in, and acted like Will Harris 2014, rather than Will Harris 2013, allowing a run in the seventh on two hits, the two-run advantage for the Dodgers seemed an awful lot more, even if the final six outs for Arizona were going to be against "anyone but Kershaw."

The run off Harris loomed large, as singles off Brian Wilson by Hill, Martin Prado and Gosewisch - yes, Tuffy had himself the first three-hit night of his career, brought the D-backs within one, and we still had runners on first and second with one out. Unfortunately, the Dodgers saw sense, and removed Wilson from the game, and their left-hander then got David Peralta swinging and pinch-hitter Miguel Montero to fly out. The perils of a short bench, and also stacking our starting line-up against Kershaw with as many right-handers as we could muster, were amply demonstrated.

California is big on enforcing equal opportunity, and so it proved in the bottom half of the eighth, with Evan Marshall following Harris and failing to put up a zero, allowing the Dodgers to match the run we scored, on three hits and a walk. [Though I did enjoy, shown above, the Puig getting tagged out by Tuffy, while doing an impression of a statue]  If our bullpen didn't officially figure in the final decision, the runs allowed turned out to be crucial and it wasn't a good day for them at all. Over the three innings worked, Oliver Perez, Harris and Marshall combined to allow six hits and two walks, and that could have led to rather more than the already disappointing pair of runs given up.

If only they'd done better, it could have been a different game. For, trailing 4-2 in the ninth against Kenley Jansen, the Diamondbacks made a surprising amount of noise. With one out, Gerardo Parra singled = tying run to the plate. Paul Goldschmidt then walks = tying run on base. Gosewisch then drove in a run with his career-high third hit of the night = tying run in scoring position, and still only one out. However, Prado struck out and Cody Ross flew out to the Puig, without any further equal signs being needed in this recap, and the Twitterverse exploded in an orgasm of Dodger delight. Arizona has now lost four of the past five, and is back to 12 games below .500. 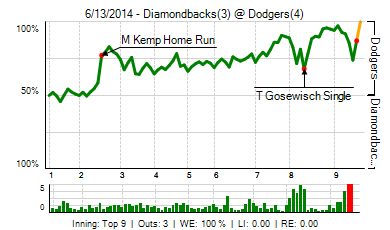 'Skins led  the GDT, but ended up with only about one-third of the comments; clearly slacking this evening. SongBird and SenSurround occupied the podium places. Also present were: Airwave, Circa4life, DbacksSkins, DeadmanG, Diamondhacks, GODSCHMIDT, GuruB, Jim McLennan, JoeCB1991, MrMrrbi, SongBird, TolkienBard, azbaseballfan, cheese1213, ford.williams.10, hotclaws, jinnah, piratedan7, rd33 and txzona. No comment turned red, so by the power vested in me, I select 'Skins pre-game comment, continuing my tradition of highlighting those who make strong statements, that the ensuing game proves wildly incorrect.

The footshooting will continue until the record improves.

It's more from LaLa Land tomorrow night, as Josh Collmenter goes for the D-backs, and Dan Haren for the Dodgers. First pitch is another inconceivably late 7:!0pm, so bring the caffeine pills.