Paul Goldschmidt and the rising tide of catcher interference

On Thursday night in Houston, Paul Goldschmidt reached base on catcher interference for the fourth time this season. Seems like a bit of a minor epidemic.

Share All sharing options for: Paul Goldschmidt and the rising tide of catcher interference

6.08
The batter becomes a runner and is entitled to first base without liability to be put out (provided he advances to and touches first base) when --
(c) The catcher or any fielder interferes with him. If a play follows the interference, the manager of the offense may advise the plate umpire that he elects to decline the interference penalty and accept the play. Such election shall be made immediately at the end of the play. However, if the batter reaches first base on a hit, an error, a base on balls, a hit batsman, or otherwise, and all other runners advance at least one base, the play proceeds without reference to the interference.

It's interesting to note it's an option for the manager, whether or not to accept the catcher's interference penalty or not - depending on what happens, they can decline it, if they feel the actual result of the play is more advantageous to their team. There have been a couple of cases of that already this season, both involving a runner on third that scored as a result of a groundout: both Bruce Bochy of the Giants and Joe Girardi of the Yankees opted to take the "sure thing" of the run, rather than the potentially higher-reward, but higher risk scenario of runners on the corners with one out, where a subsequent double-play ball would have led to a zero.

Also worth pondering that it's not a reviewable play under the new instant replay protocols, which is kinda odd. A manager can ask for a review if he thinks a ball hit the batter, but not if he thinks a batter's swing tipped off the glove of the catcher. The Los Angeles Dodgers found that out, in a game against the Padres earlier this year.

It's certainly a new aspect of Goldschmidt's game, and for the Diamondbacks in general. In the fourteen seasons the team had played through the end of 2011, we had seen just nine examples of catcher's interference allowing an Arizona hitter to reach base. And the majority of those (5) were off the bat [or bat-meets-catcher's-glove, to be more precise] of one man: Craig Counsell. But there were then two in 2012; three in 2013, including a pair in one game against the Yankees; and in 69 games this season, we have already had four - surpassing the team's entire tally for the nine years from 2003-2011 combined.

Goldschmidt now owns the last five examples for Arizona; he and Counsell are the only Diamondbacks ever with more than one. It's not something anyone seems to have asked him about, but we can perhaps get a clue as to what' going on from David Murphy, who was quizzed on the topic in spring 2011, after reaching on catcher's interference in consecutive games. He said: "I just think that when I get two strikes on me, I'm making sure I don't get beat out front on soft stuff," Murphy said. "I'm waiting to see the ball as long as I can. Sometimes I'm not trying to hit the ball, but just foul it off and swinging almost at the time it gets to the catcher's glove."

That certainly sounds like Goldschmidt, who is well-known for his skill with two strikes. This season, after falling behind 0-2, the average major-league hitter has a line of .162/.193/.238; in the same situation, Goldie is more than 230 OPS points higher, at .266/.288/.375. Put another way, there are 34 qualifying hitters who currently have a lower overall OPS, than Goldschmidt does after falling behind 0-2. However, only one of Paul's four CI's this season have come on a two-strike count (and as an aside, it's an 0-for-0 in the box-score). Two have been 0-1, and the one against Brandon League came on the first pitch of the at-bat. So, it's not just his approach when behind in the count.

It's worth noting that it isn't just Goldschmidt. He's part of a rising trend of CI in the majors over the past decade. The pattern is obscured a bit by the random fluctuations from season to season, but if you take a five-year rolling average of the number of catcher's interference calls, things become much clearer: 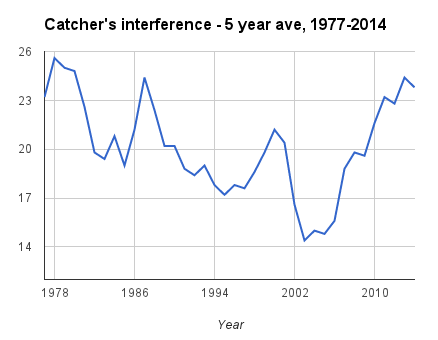 Save for trivial blips, the rate of catcher's interference has increased every season since 2005, and we only need a handful more over the rest of the season to give us the highest rolling average in more than a quarter century. That year, 1987, also set the single-season mark of 31 since full records began in 1973, but with 16 occurrences already in 2014, and the campaign still short of the half-way point, that could well be in danger too. A suggestion for the rising tide from 2008 was, "better protective equipment for catchers that let them set up closer to the batter, even if it's by a couple of inches." But I think there's another factor at play.

In 2014, the average fastball velocity, across all pitchers, is 91.4 mph. A decade ago, the same figure was 90.1 mph. Pitchers are throwing the ball harder, and it seems logical that batters will react, by setting up further back in the box, to give themselves as much time as possible to react to the incoming delivery. But the further back you go, the nearer you are to the catcher, and the greater the chance of a resulting clash. Perhaps supporting this, I note that relievers are throwing harder still - the average fastball there is 92.3 mph (up from 90.8 in 2004) - and 11 of the 16 instances of CI this season, have taken place in the sixth inning or later.

We are still dealing with a relatively small number of cases here. But it is potentially very problematic, mostly because of the potential threat it poses to the catcher. Yasmani Grandal, the "interferer" in Goldschmidt's case shown at the top and in GIF format above [click to open in new tab], was extraordinarily lucky to take what was basically a full-blooded swing from Goldschmidt on his catching hand, and escape with a burst blood vessel. "I was expecting them to tell me I had a broken pinkie and a fractured knuckle," said Grandal afterward. But this is baseball, and one imagines nothing will be done (at least, not until St. Buster gets hurt...).

Of course, numbers would really shoot up, if teams took heed of Jeff Sullivan's cunning suggestion, and started using catcher interference as a way to issue intentional walks. It removes the risk of a wild pitch - which we've seen this season already, can be problematic - saves the pitcher's arm, and prevents him from having to "reset his sights" back to the strike-zone for the next batter. However, I think it would require a particularly brave manager to call for such a move!

[All stats through June 12]