Josh Collmenter strayed over to the dark side of the force tonight, spending the first couple of innings trying more than doing. The result was his first loss in nine starts, as the offense just fell short of pulling out a comeback. But we did get to see something we probably haven't seen before.

Early on, Mrs. SnakePit muttered that Josh Collmenter needed to spend more time in the bullpen, and less faffing around ComicCon waving a light saber around. Certainly, the first two innings tonight suggested our lack of faith was entirely justified, rather than disturbing. It took Josh 48 pitches and 14 batters to reach the middle of the second, by which time the Astros were 4-0 ahead. Not all of that was Collmenter's fault: he wasn't helped by Aaron Hill's third error of the year (surpassing his tally from the entire 2013 season). But he wasn't showing great control, and the Astros did a fine job of laying off the good pitches and hitting the bad ones.

At that point,. it looked as if we might immediately miss Trevor Cahill's presence as long relief. But to his credit,. Collmenter was able to Yoda up, facing one hitter over the minimum from the third through the seventh - and, equally as important, being economical with it, requiring 53 pitches to get through those five innings. His night finished after seven, with a line of four runs, three earned, on seven hits and one walk, with five strikeouts. It was a quality start from Josh, which seemed fairly unlikely after his performance during the first couple of frames.

Unfortunately, the offense managed exactly nothing off Cosart the first time through the Arizona order. After our first 10 had been retired, Gerardo Parra drew a walk for our first base-runner, with one out in the fourth. The first hit and run followed immediately, Paul Goldschmidt driving Parra in with a double down the left-field line, and a Miguel Montero single brought Martin Prado up as the tying run, still with one out. Of course, Prado hit into his fourth GIDP in the last nine games - each time, Montero was on first. It's a dead horse, but having the ultimate contact hitter bat immediately behind the slowest runner on the team is a bad idea. Why Gibson continues to do it, I don't know.

The sixth inning saw the D-backs pull closer still, making it a one-run game. With one out Didi Gregorius singled, and Parra then blooped a hit into right-center, which clanked off the glove of the Astros' CF, allowing Didi to whizz all the way round from first to score, with Parra ending up on second. Goldie drew a walk, and Montero then continued his recent hot streak, with an RBI single that scored Parra. However, Prado struck out, on a pitch nowhere near the strike zone, and Aaron Hill grounded out. Still, given we were four runs down before I'd finished loading the dishwasher, I'd take a 4-3 score after six.

That marked the end of Cosart. For the seventh inning and into the eighth, we got to see former Diamondback leftie Tony Sipp, who had originally signed with the Padres this winter, but asked for his release after spending the first month in Triple-A, signed with the Astros, and has been doing decent work for them, holding opposing hitters to a .163 average coming into tonight's game, in a dozen appearances. He retired the five left-handed batters he faced, around a two-out walk in the seventh to pinch-hitter Cody Ross, though Gregorius gave the ball a ride to the warning track in right field, before it died harmlessly in an outfielder's glove.

Another returning name then took the mound, this time for Arizona, as we saw the first appearance of Will Harris since mid-April. He worked a scoreless eighth, albeit around two hits, and with the help of a nice stab by Ender Inciarte in center for the final out. In our half of the eighth, there was some genuine weirdness with one out, as Bo Porter took Sipp off the mound - but moved him to right-field. A right-handed reliever came in, walked Paul Goldschmidt, and Sipp then returned from the outfield to strike out Montero before leaving for good. I've seen this kind of things in box-scores before, but never in a game I've watched. One of the reasons I love baseball.

Our other new arrival worked the ninth, with J.J. Putz pitching for the Diamondbacks. He joined Harris in throwing a scoreless inning - though, like Harris, also allowed a pair of hits, and needed some help from his defense. In this case, it was Gerardo Parra doing Gerardo Parra things, Gerardo Parraing a runner out at home, unwisely trying to score from second on a single. That play had to stand a review from the Astros, but it was a brief one before MLB officially called it, declaring the runner just another victim of Parracide.

It was like throwback night coming out of the Astros bullpen, because for the ninth, they turned to former Arizona closer, Chad Qualls. He's now pitching rather well for Houston, having gone 17 consecutive games without allowing a run. Make that 18 now. Hope flowered briefly when Ender Inciarte got a two-out double - the only hit to come from slots 5-9 in the order for Arizona tonight. But pinch-hitter Chris Owings struck out to end the game. It also marked the end of David Peralta's seven-game hitting streak to start his career in the big leagues: he regressed hard tonight, going 0-for-4 with three strikeouts. 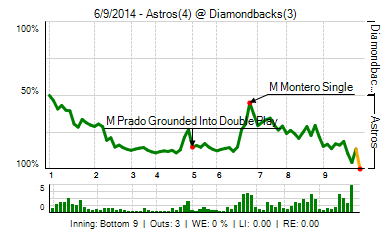 isn’t the same without Cahill.

It's back at Chase tomorrow, for a game in the afternoon, which isn't on television. Something about trees falling in the woods. Bronson Arroyo takes on Brad Peacock, with a first pitch at 12:40. Hopefully, we won't need to see Joe Thatcher in the outfield at any point.